How Crowdfunding Combines the Power of Technology, Storytelling, and Community to Create New Avenues of Fundraising for Those in Need 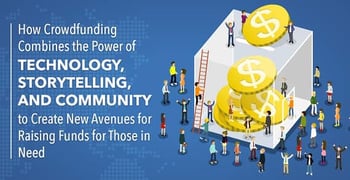 In a Nutshell: Social fundraising networks are expected to raise more than $1 billion in 2018. Crowdfunding campaigns are being used to raise money for everything from emergency medical expenses to school tuition to sponsoring youth sports teams, and many other worthy causes. But as crowdfunding pioneer and FundRazr CEO Daryl Hatton points out, there’s a right way and a wrong way to run a social fundraising campaign. A successful campaign tells a story and makes good use of technology, like video, to get the message out. It also uses empowerment and motivation rather than victimization. Finally, having realistic expectations for your fundraising and keeping your donors informed can go a long way in helping you achieve your goals.

In spite of an improving economy, many Americans are still struggling to meet basic expenses.

In fact, according to the Federal Reserve’s Report on the Economic Well-Being of US Households, 40% of adults say they don’t have enough to pay an unexpected $400 expense without borrowing money or selling something. But people are increasingly turning to another resource when dealing with emergency expenses — crowdfunding.

The growing popularity of social networks for fundraising has led to an industry valued at more than $1 billion for 2018. The growth of crowdfunding is expected to continue, as more platforms come online and more people become comfortable with this method of asking for money. By some estimates, the amount of money collected is expected to hit $1.5 billion by 2022. So, what do people need this money for? In short, just about everything.

A recent look at FundRazr, a pioneer in social and online fundraising since 2009, shows campaigns for everything from helping with medical expenses to establishing a memorial fund to sending a team of Canadians to the Quidditch World Cup (yes, that’s a real thing).

Many of the requests for contributions are heart-wrenching, like this plea from a young couple in need of donations to pay for cancer treatment. Others are inspiring, like the person who was accepted to midwifery school but was turned down for financial assistance, and is asking for help in fulfilling a dream. There are also campaigns to help struggling veterans, campaigns that support social programs, campaigns on behalf of youth sports teams, and almost anything else you can think of.

With the growth in popularity of this type of social fundraising, we wanted to understand just what makes a crowdfunding campaign successful — so we turned to an expert on the subject.

Daryl Hatton is a crowdfunding innovator and CEO of the Canadian crowdfunding platform, FundRazr, which has been responsible for raising more than $125 million for important causes.

“Where crowdfunding tends to work best is where there’s been an event that’s happened suddenly, and where there’s a particular solution,” Hatton said. “It’s also important to understand what motivates people to want to help. Most times people contribute because they see a problem and believe they can help you solve it.”

Crowdfunding is About More than Worthy Causes

Whether you need money for medical bills you can’t cover, emergency car repairs so you can get to work, funding for a worthwhile social program, or any other valid expense, you’ve got to get your message out there in the right way.

As more people see requests from their social media contacts talking about someone in need, the ability to tell the story of a specific problem and the reason the money is needed is more important than ever. Hatton recommends focusing more on the impact of the money you would be receiving and less on the specific need.

“Saying I need money for X isn’t as effective as saying, ‘If I had this amount of money, then I could solve this particular problem.’ There’s a difference, and people are more willing to help someone who tells them what their contribution is actually going to do,” Hatton said.

He also recommends taking ownership of your situation and not telling a victim’s story. Rather, tell a story that says you see the situation and need the temporary help of others to solve a particular problem. Self-starters are far more likely to find people who want to help them.

You can also take actions that show people exactly what you’re dealing with. For example, if you’re raising money for tuition, show a picture of your application to the school and the acceptance or confirmation letter you got back.

Finally, Hatton recommends planning the campaign, and not just firing it up without putting much thought into it. Run your story by a friend or two first. Ask them if your strategy makes sense and if they would be inspired to give. You’ve only got one shot at appealing to your immediate social network, so make it count. If your friend mumbles and shifts his feet, then don’t launch it — start over.

One of the keys to a successful campaign, in addition to crafting an effective message, is making the most of the technology that’s available. That means using social targeting in your messages, embedding links, and using widgets like these from FundRazr. Tools and technology for interacting via social media are some of the best means of connecting with people.

“Remember to keep your tribe updated on what their money is being used for and the difference it’s making,” Hatton said. “People who do this well raise substantially more money than everybody else.”

Embedding widgets, like these available from FundRazr, provides donors with an easier path to giving.

Video messages are another great way to get your custom message out there. Video can say far more than a paragraph, and the messages from those who need the financial help are the most powerful and effective possible.

“Video is so simple to do that I don’t know why more people aren’t doing it. Video gets your personal story out there,” Hatton said. “By investing a little bit of vulnerability in a personal message, it tends to help win people over. Video updates are great, too.”

And don’t forget the real power behind social media and social networking — the ability for people who don’t even know you to see your message and contribute to your cause. Turn your own direct network of friends and family into ambassadors for your campaign by sending out regular updates letting them know how you’re doing. Update them with pictures or videos showing your progress and how much their contributions are helping. People love to be part of a success story, and they’re likely to share their role in your success story with their own circle.

Have Realistic Expectations for Your Fundraising Campaign

One of the last things Hatton mentioned in our conversation was the need to have realistic expectations when you launch your campaign about what you hope to accomplish. There are a lot of worthwhile causes out there and a limited amount of resources. The idea that launching a campaign for financial contributions is going to be the answer to all your worries is simply naive.

“Dispense with the illusion that as soon as you start your campaign that all of those people out there who see it are going to give you the money you need,” Hatton said. “Raising money by crowdfunding can be a challenging task.”

Those dealing with medical emergencies have used crowdfunding to pay for expensive treatments.

In some cases, a donation campaign can be set up for close friends and family to give in a convenient and easy way. Platforms, like FundRazr, are perfect for this type of giving. However, crowdfunding requests like that won’t attract potential donors outside of your immediate circle.

Consider widening your audience to include others who might hear about you and consider your cause to be worth supporting. That involves using the techniques and suggestions that Hatton has given us here.

Most online platforms, like FundRazr and others, allow you to design and launch a crowdfunding campaign for free. However, it’s worth considering the fee-based services these platforms offer if you really want to attract a broader donor pool. Many of the social media and social targeting features mentioned here are only available if you pay for them.

In any case, the possible financial benefits are substantial, and if the trend continues, the future may hold even more willing donors who can help you in your time of need.