How Couples Can Work Together to Solve Their Debt Problems 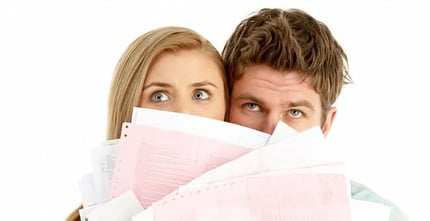 By: Mike Randall
Our popular “How-To” series is for those who seek to improve their subprime credit rating. Our articles follow strict editorial guidelines.

With financial problems near the top of the list when it comes to conflict within a relationship, it makes sense for couples to work together to solve their debt problems.

In this guide, I’ll address the most common causes of debt and how couples can address them in a way that’s healthy for both the wallet and the relationship.

By focusing the energy of both partners, the debt burden is made easier to handle and may just serve to strengthen the bond that already exists.

Let me start by saying debt within a relationship should never be considered his debt or her debt, but rather our debt.

This is an important concept to remember when resolving debt problems, and I’d even go so far as to say it won’t work any other way.

If the two of you are willing to combine forces and tackle the problem – regardless of how the debt was incurred – then you are far more likely to be successful.

Once you’ve agreed to address the problem as a team, the first step is to identify exactly what the debt entails.

This is another crucial step, and it requires complete openness and honesty. There can be no hiding of debt or pretending it isn’t there.

It also must be noted there is no room for judgment or blame in this process. Create a list of all debts, along with the interest rates they carry.

Don’t attempt to prioritize them just yet, as that will come later.

Once you’ve determined the amount of your combined debt, you’ll have a better idea of what it’s going to take to resolve it.

For some couples, this may mean a few months of belt tightening. For others, it can mean years of focused effort aimed at the single goal of paying off your debt.

Every situation is different, and it’s up to the two of you together to determine the urgency of paying off your debt and the sacrifices you are willing to make.

However, and this is another crucial consideration, you must both be in complete agreement on your commitment level.

Now that you’ve made it this far, the next step is to identify the most serious debt – that debt which is costing you the most and needs to be paid the soonest.

in life’s joys and setbacks together.”

This is where you begin prioritizing. And the highest priority debt isn’t necessarily the largest amount either.

Sometimes it’s best to start with small debts that can be paid down quickly in order to reduce the quantity of debts.

Begin with store credit cards, as these tend to have higher interest rates but are usually smaller amounts.

Things like car loans and mortgage payments need to be budgeted for, but they are long-term debts that can be managed once the revolving and unsecured debts are taken care of.

So now that your debts are prioritized, it’s a matter of identifying the monthly amount that can be put toward paying them down. This is where the sacrifice comes in.

You need to determine where and how much can be cut back in order to focus the largest amount of your financial resources possible toward paying down debt.

However, the result of this process will be a concentrated effort that will solve your debt problems in the quickest amount of time possible.

The two of you also need to make a commitment to each other to change your spending and borrowing habits so you don’t end up in the same predicament again.

Agree to eliminate bad habits, like spending money you don’t have. Instead, treat your credit card as a payment method of last resort.

By following this plan, you will be on your way to a happier and healthier financial life together. It may also serve to show you just what can be accomplished as a team.

I’ve discovered the happiest couples are those that share in life’s joys and setbacks together. By addressing this setback in your financial life, you can move on to the joys of living debt-free.