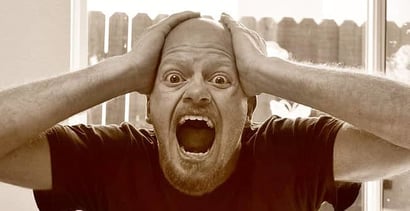 Most of us will endure financial struggles at some point in our lives and come out on the other side, but debt can make people do otherwise unimaginable things.

These are the true stories of people who went to great extremes to find financial freedom.

Student loans are no joke, and college coeds sometimes have to find odd jobs to help put themselves through school.

In an interview with RealClearEducation.com, the student said tuition is $60,000 per year — she was offered only $13,000 year in financial aid.

Knox plans on pursuing a career in civil rights law with an emphasis on women and hopes to use her experience to protect the rights of other sex workers.

2. Getting face tattoos for money

When faced with growing debt and many mouths to feed, Billy Gibby became a human billboard. He accepted money from companies to tattoo their websites on his face, also hoping to make it into the Guinness Book of World Records.

Additionally, “He has even changed his name to Hostgator Dotcom and is willing to again change his name to that of a company or website.”

In March 2013, NY Daily News wrote that Gibby regrets his face tattoos because it makes it hard to get a job, and he was asking for financial help in getting the face tattoos removed — in exchange for tattoo real estate on the rest of his body.

Antoinette Davis (right) trafficked her daughter to settle a drug debt. The young girl ended up dying at the hands of Mario Andrette O’Neil (left) in the process.

In 2009, police arrested Antoinette Davis on charges of child prostitution. She trafficked her own 5-year-old daughter, Shaniya, in an act of utter desperation to pay off a drug debt.

Sadly the child was raped and murdered in the process by a man named Mario Andrette O’Neil. It’s tragic the mother chose this as a way to earn money to pay off her debt.

Sarah Ferguson is married to Prince Andrew, second son of Elizabeth II and fifth in line to the British throne.

In 2010, in an act of desperation, she was caught on video accepting a bribe of £500,000 ($750,000) from an undercover reporter in exchange for an introduction to her ex-husband, Prince Andrew. U.K. tabloids had a field day with the discovery.

By 2011, Ferguson was able to get out of debt due to compensation from a reality show on Oprah’s TV network and counseling from financial expert Suze Orman, according to the NY Post.

Prior to the bank robbery, Gruniak had been arrested before for possession of stolen license plates.

In 2009, a Syracuse, New York, man robbed a Chase bank at gunpoint, leaving with $20,000 in tow. Police caught up with and arrested Mark S. Gurniak II, a local high school math teacher.

What caused this educator to turn into a bank-robbing criminal? He owed more than $9,000 in credit card and bank debts.

Apparently Gurniak, supporting a wife and daughter, felt there was no other way to pay back what he owed on a teacher’s salary. Locals were shocked to find out Gurniak was being charged with first-degree robbery.

A Financial Journey: My Money Design

The Smart Ways to Stay Out of Debt