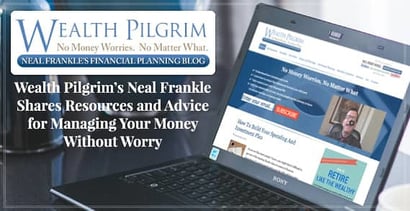 In a Nutshell: Living in a constant state of anxiety over your family’s finances can be hard enough when you’re an adult; as a child, it can be overwhelming. Neal Frankle took the lessons he learned while growing up in a financially unstable household, and used them to create a successful career as a Certified Financial Planner (CFP). He then founded Wealth Pilgrim, an information-packed blog and webinar series dedicated to helping others eliminate their money worries by taking charge of their finances. Neal believes that, with the right financial plan, anyone can manage their money without worries, no matter what.

The experiences we have while growing up go a long way toward shaping the person we eventually become. For me, early exposure to science museums and educational opportunities contributed to my scientific curiosity and eventual degree.

For Neal Frankle, one of the minds behind the Wealth Pilgrim blog, a youth spent observing his father’s questionable investing skills, and dealing with the financial worry they created, helped push him toward a future in finance.

“My father worked hard, but he was a speculator who took big risks,” explained Neal. “He invested all he had (and even money we didn’t have) in crazy land deals that didn’t work out. My family lived in constant financial fear and stress.”

Neal Frankle started Wealth Pilgrim to share what he’s learned over 30 years as a CFP.

Eventually, luck ran out and the family lost everything. Though he grew up in an expensive middle-class home in the Los Angeles suburbs, shortly after the death of his mother, Neal’s family found themselves in a small apartment in a run-down part of town.

“He couldn’t even consider buying a condo; we were that broke,” Neal described. “I often used the money I earned as a teenager to pay bills to keep the lights on and water running.”

Just two years after losing his mother, Neal’s father was killed in an airplane crash. Neal and his siblings went from house to house, luckily staying off the streets but without a true home.

As soon as he was able, Neal went to college to study accounting, working hard to ensure he’d be desirable to future employers. He started his career as a financial planner right after graduation.

Today, with the help of his business partner Assaf Katzir, Neal uses his experience both as a Certified Financial Planner (CFP), and as someone who has lived in financial fear, to help thousands of Wealth Pilgrim readers learn to better manage their money — and their money worries.

When it comes to worrying about money, sometimes even a full bank account isn’t enough to allay your anxieties. Whether you’re living large, or just paycheck-to-paycheck, almost everyone worries about money.

“I’ve been talking to clients for 30 years, and they all worry,” said Neal. “People want to make sure they won’t run out of money, that they’re investing correctly. It’s a big concern.”

Each section of the blog has dozens of helpful articles and guides for increasing your knowledge and reducing your financial anxiety. For the visual and auditory learners, Neal carries his no-nonsense approach into his webinars and courses, discussing personal finance and spending in a variety of helpful videos.

The articles on Wealth Pilgrim include comprehensive coverage of a wide range of personal finance topics.

“I try to lay out a map for people,” explained Neal. “It helps finance become more understandable, and more manageable, and people relax. When your worry level goes down, you’re better able to make — and execute — good decisions.”

With that in mind, all of the resources on Wealth Pilgrim are designed to be accessible and engaging, not complicated or confusing. You won’t find tons of numbers or equations — just Neal’s advice, backed by more than 30 years in finance.

“Many people have old trauma from numbers,” said Assaf. “The combination of this fear of numbers, plus financial uncertainty, can be overwhelming for people. Neal’s solution is to give them a plan, and make it reachable.”

Neal’s 3 Steps to Start Taking Control of Your Finances

While it can be difficult to get a handle on out-of-control finances, ignoring your problems won’t make them go away. “When overwhelmed, people actually distance themselves from this thing they haven’t been managing,” said Assaf, “so their problems just get bigger and bigger.”

In the face of those staggering mistakes, many people succumb to worry and anxiety, but, according to Neal, that’s the opposite of how to handle your problems. “Worrying wastes your energy,” stressed Neal. “Worrying won’t help you solve problems. In fact, if you are like most folks, worrying will paralyze you.”

According to Neal, the first step to solving your financial problems is to start looking forward instead of back, forgiving yourself for your past mistakes so you can move on to determining how to best fix them for the future.

“I believe that there’s a lot that you can do to make your financial life better,” he explained, “but, there are also some things you can’t change.” Neal believes you need to accept the mistakes and move on, rather than wallowing in self-pity or worry.

“Before you do anything, you have to start forgiving yourself.”

“Feeling sorry for yourself or berating yourself for making poor choices in years gone by, is an expensive pastime you can’t afford. Those things you cannot achieve — be at peace with them, because you’re doing the best that you can do.”

2. Identify the Problems, and the Solutions

Once you’ve made peace with how you got into your current situation, it’s time to start dealing with it. You start by laying it all out there.

“Before you do anything, you have to be clear on what got you into the mess you’re in. Understand the cause,” said Neal. “You might think your problem is that you need to improve your credit score, but the real problem is you spend too much.”

When you get down to the root of your money worries, you can begin to properly address them. Having a clear picture of your situation will allow you to start identifying solutions to the right problems.

Next, is to brainstorm those solutions. For every problem on your list, you should try to come up with at least a few potential actionable solutions you can work into your plan.

After determining where you are, how you got there, and what you can do about it, you need to start putting together a plan of action. “I believe that you don’t have to worry about it if you take action,” said Neal.

And that action shouldn’t just be limited to your current debt, or any other individual money problem. According to Neal, you need to be managing every facet of your finances. “You need a spending plan. You need a savings plan. And you need an overall financial plan.”

“There’s less uncertainty, less fear, and less anxiety when you have a plan,” added Assaf. “You can say, ‘We had a plan, we executed it, and we solved that issue.'”

No Money Worries — No Matter What

For Neal, those lessons were the ones about risk, reward, and consequences he learned by watching his father struggle in real estate.

Now Neal uses everything he’s learned to help thousands of Wealth Pilgrim readers accept, address, and fix their own mistakes through his blog and videos. You can even get specific advice through the “Ask Neal a Question” tab for anything he hasn’t covered.

“When you make a money misstep, there are priceless lessons to be learned. But once you glean those golden insights, there’s just no point in holding on to the angst. Instead of bothering yourself over the past, just make sure you don’t make the same mistake again.”