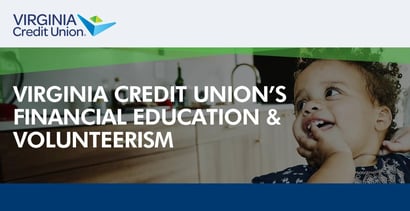 In a Nutshell: Credit unions are known for their deep ties to the community, and Virginia Credit Union exhibits this through its robust financial education programs and its hands-on and financial support for local organizations. The Richmond-based credit union recently took first place in the Desjardins Financial Education Awards for its adult financial education efforts and second place for its youth-oriented programs. Both recognitions were in the large credit union category. Virginia Credit Union also encourages its employees and its members to volunteer at local organizations. And while some sponsored events and planned in-person classes were scrapped or postponed due to the COVID-19 pandemic, the credit union has made efforts to follow through on its commitments to organizations and individuals.

Credit unions began popping up across the U.S. in the early-to-mid 1900s as the idea took hold that, by pooling their resources, a community of people could serve as better stewards of their funds than a faceless institution.

More than 100 years later, those community roots still run deep in many credit unions around the country. While offering many of the same modern financial products and services as banks, credit unions tend to bring to the table a strong focus on supporting and improving the communities they serve.

And that is certainly the case for Virginia Credit Union, which today serves more than 300,000 members, mostly in the Richmond area.

Founded in 1928 as the State Employees’ Credit Union, the organization has grown steadily, including a merger last year that added two new branches to the credit union for a total of 20, said Virginia Credit Union Director of Public Relations Glenn Birch.

Birch said the credit union maintains $3.5 billion in assets, and while most of its branches are in Richmond, it has branches in Fredericksburg, Charlottesville, and Farmville.

Virginia Credit Union is known for its commitment to community, as demonstrated by two recent awards it received for its innovative financial education initiatives. We spoke with Birch about the honors as well as other notable ways the credit union serves the Richmond area.

Birch said that Virginia Credit Union took first place in the Desjardins Financial Education Awards this year in Virginia in the adult financial education category and second place in the youth category.

He said the credit union was pleased to be honored and the awards shine a light on some of the financial education initiatives that are really making a difference in its communities.

“It really highlighted a project that we’ve been doing with correctional facilities to provide financial education for inmates; preparing them more effectively for when they return to society,” Birch said.

Glenn Birch is the Director of Public Relations at the Richmond-based Virginia Credit Union.

The program — Financial Freedom for Prisoners — was created by the Virginia Credit Union and was carried out at the U.S. Correctional Complex of Petersburg and the Virginia Women’s Detention Center in Chesterfield.

In 2019, the credit union reached 1,927 inmates through a series of 44 financial education classes in the program.

Birch said one of the most impactful components of the Financial Freedom for Prisoners program is a review of the participants’ credit reports.

“Getting the inmates to order their credit report and being available to help answer questions as they went through it — I just think that was a very empowering exercise they did,” he said. “It enabled those folks to see and clear up some things that might not have been accurate or understand how some past decisions may have impacted them.”

“Virginia Credit Union’s second-place award focused on teen money camp programs, guest presentations in schools, ‘Real Money’ simulations with middle schoolers and their parents, and numerous other programs for youth in 2019,” according to a credit union press release.

“We have a team of four financial educators on staff, which makes us pretty unusual,” he said. “They’re educators and that’s their focus. They don’t make loans, they’re not pushing products. Their goal is to help people feel more empowered about their finances and that’s what they do.”

Delivering impactful financial education is clearly a priority for Virginia Credit Union, but the institution also makes a point to connect with the community in even more direct ways like volunteering and sponsoring events.

“One of the things that’s been interesting — although it’s had to take a bit of a back seat this year (due to COVID-19) — has been our effort to involve credit union members in our community outreach activities,” Birch said.

He said that, like many organizations, Virginia Credit Union’s staff members volunteer their time to support local organizations but the credit union wanted to take things a step further.

“We asked what a credit union could do that was different, so we invited our members to join us for some of these projects,” Birch said. “In one case, we went to an inner-city school and did construction, painting, yard work, and other things like that.”

Other efforts involving credit union members included volunteering at local elementary schools and at Shalom Farms, a local nonprofit that grows and distributes healthy nutritious food for those in need in the community.

“Those projects have been great, and our members have enjoyed participating in them,” Birch said. “They say that a credit union is a different kind of organization, and we want to live that out. And one of the ways that we can do that is to say, ‘Hey, let’s volunteer together, let’s get out in the community and see what we can do.”

Other notable actions the credit union took recently include contributing $24,000 to the Children’s Hospital of Richmond at VCU by matching employee contributions; facilitating 250 meals at The Doorways, which houses out-of-town families while loved ones are receiving medical care in Richmond; and donating nearly 1,600 boxes of cereal to a food bank in Farmville after a flash flood destroyed their inventory.

Continuing Support in the Face of the COVID-19 Pandemic

While the credit union had to curtail most in-person volunteer efforts due to the COVID-19 pandemic, it hasn’t stopped helping the community in other ways. And Birch said that it plans to continue its volunteer programs when it’s safe to do so.

“Our approach has been simple: Anything that we committed to doing financially prior to the pandemic, we want to make sure that we follow through on those commitments,” he said.

The credit union has also shifted its vast financial education courses to online platforms so it can continue to reach as many people as possible, he said.

That means the institution has been hosting plenty of webinars in place of the in-person lessons it previously held throughout the community in the large Community Resource Center it has established at its headquarters building.

Virginia Credit Union has also prioritized the safety of its employees and members. While its branches remain open, the credit union encourages members to take advantage of its digital banking services.

“Please remember that many of the services you depend on can be performed easily and securely through online banking, mobile banking, and over the phone with our contact center representatives or Quikline phone banking,” according to the website. “Please call on us if you need assistance taking advantage of these convenient services.”