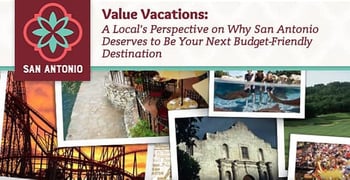 Travel may seem financially out of reach for some people, but many American cities offer plenty of free and inexpensive activities that can help you broaden your horizons without emptying your wallet.

One such city is the South’s second most populous city, San Antonio, which is known for its scenic River Walk and historic Spanish missions, including the iconic Alamo, San Antonio.

Recently, we had the opportunity to sit down and chat with Andres Muñoz, Vice President of Marketing, Communications & Tourism at Visit San Antonio, to learn more about all the affordable activities the city offers from a local’s perspective.

What brings the most tourism to San Antonio, and what are some of its can’t-miss attractions?

With diverse offerings, temperate weather, and warm hospitality, it’s no surprise that San Antonio draws more than 37 million visitors a year. We have long been known for two of the top most-visited attractions in Texas, the famous Alamo and the San Antonio River Walk. However, there’s so much more to see!

Just three years ago, the Spanish Colonial Missions, including the Alamo, were designated a UNESCO World Heritage site — the first in Texas. Known as the San Antonio Missions National Historical Park, all missions are free to enter. For more ideas on free attractions, check out this page on our website.

The Alamo is one of San Antonio’s biggest draws for millions of tourists each year.

Our River Walk has expanded to 15 miles — there are plenty of opportunities to enjoy the river’s enhanced natural beauty by renting a bike on the Mission Reach or simply taking a leisurely stroll on the Museum Reach on the landscaped pathways to view public art.

What is the most popular time of year to visit San Antonio?

With more than 250 days of sunshine a year, San Antonio is a destination for families in the summer and snowbirds in the winter alike.

For scenic drives and hikes, spring is a beautiful time to catch the Texas wildflowers.

Summers are especially popular with families. Our theme parks, such as SeaWorld San Antonio, Six Flags Fiesta Texas, and Morgan’s Wonderland, are in full swing and provide hours of entertainment not far from the heart of the city. And there is always something new happening!

What are some of your personal favorite things to do and see in San Antonio that are free or affordable?

I love taking my kids to the new Yanaguana Garden at Hemisfair Park, which is a play environment of more than four acres, and designed for all ages and ability levels right in the heart of downtown.

What are some popular local dishes to try and restaurants that won’t break the bank?

Our city has long been known as the capital of Tex-Mex, and dishes like Puffy Tacos — invented in San Antonio — are affordable and easy to come by. Some local favorites include Los Barrios Restaurant, Mi Tierra, Teka Molino, Ray’s Drive-In, and Henry’s Puffy Tacos.

With the evolution of the local culinary scene, which we call “Tex-Next,” there is an array of diverse options, including street food from Mexico at places like La Gloria and family-style barbecue at places like Two Bros BBQ.

Do you have any advice for tourists looking for affordable lodging in and around San Antonio?

VisitSanAntonio.com’s Deals page has the city’s latest hotel deals, plus a coupon book for attractions and museums, as well.

What’s the most economical way to get around the city?

A great, affordable way to get around is on our public bus system — VIA Metropolitan Transit — that has three routes under their VIVA program that highlight some of the city’s top attractions. At only $2.75 for an unlimited day pass, this is a great way to get around the city and see some of the top sites.

Plus, visitors can enjoy discounts and special offers when they show their VIVA Passport. The VIVA Passports are available aboard VIVA buses, at partner locations, and at VIA’s Customer Information Centers and Transit Centers.

What do you think makes San Antonio stand out as a tourist destination among other American cities?

Our sense of authenticity and warm, friendly locals are just a couple of reasons visitors return to San Antonio again and again.

San Antonians have a deep sense of pride, and they love preserving and showcasing their city. Accessibility is a key factor as well; the downtown and surrounding neighborhoods are compact and easy to access whether by walking or taking a short riverboat ride. In our welcoming community, it’s easy to “live like a local!”