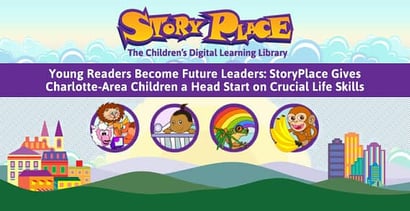 In a Nutshell: Studies have shown that children who learn to read at a young age tend to get the types of head starts that lead to more lucrative career paths. Knowing the importance of early literacy, the Charlotte Mecklenburg Library system developed a program called StoryPlace to virtualize storytime for the preschoolers who couldn’t make it to their local library branches. The program has been instrumental in helping children achieve a third-grade reading level on time, which has been a key predictor of graduation rates and future success. For its imaginative, hands-on approach to educating children, we’re honoring StoryPlace and the Charlotte Mecklenburg Library system with our Editor’s Choice™ recognition.

When North Carolina’s Charlotte Mecklenburg Library system started an online story time in 2000, its target audience were children in the area who couldn’t make it to storytime at the library.

The program, called StoryPlace, was embraced — to the library staff’s surprise — mostly outside the US, in countries where people of all ages were trying to learn English. In fact, Emily Nanney, the Children’s Service Coordinator at Charlotte Mecklenburg Libraries, told us some of the highest rates of adoption were in Japan.

Of course, locals learned about the program, as well, and they remain the program’s principal users. The program focuses on early literacy — providing children with the type of educational foundations that can set them up for better job prospects and more lucrative financial futures.

Learning to read early manifests in several areas of life for children, including neurological, educational, social, linguistic, and psychological development. Through programs like StoryPlace, Charlotte’s library system aims to level the playing field for children from every type of background so even those in high-risk neighborhoods can be on the same page as their peers. For leading the way as an educational resource for Charlotte’s youth, we’re honoring StoryPlace and the Charlotte Mecklenburg Library system with our Editor’s Choice™ recognition.

In its early stages, StoryPlace comprised a team of IT and graphic design specialists, and children’s staff and managers, who would come up with a script, and record voiceovers set to images. They also made book lists and take-home activities to accompany the storytime sessions. They did this for two groups of kids: preschool-aged, or those under the age of 5; and kids aged 6 to12.

“It was widely popular,” Emily said. “We had it on the in-house computers and online, so people could access it from home.”

A Third-Grade Reading Level is a Key Predictor of Success

In 2014, the program, having already established a digital presence, wanted to branch out and deepen its emphasis on early learning. The Charlotte Mecklenburg Library received funding through the State Library of NC from a Library Services and Technology Grant and incorporated practices from a national program called Every Child Ready to Read, which is focused on teaching parents and caregivers how to support the early literacy development of their small children up to age 5. The joint project of the Public Library Association and the Association for Library Service to Children was novel at that time, and has since expanded into a second edition.

With the funding, the Charlotte Mecklenburg Library decided to specialize in the literacy of young children, so it stopped developing content for older children, although Emily notes that its enhanced program for young children (aged 2 to 5) might appeal to slightly older elementary school kids, as well.

“We added staff members doing activities — like using puppets — and also kept those core stories,” she said, noting that all activities are free. “We want the library to be accessible to all. We want to make sure to provide free resources so there are no barriers.”

The library system also wants to educate young children so that, by the time they are in third grade, their reading skills are on par with their peers.

“Research shows that a higher percentage of kids who are on grade-level reading by the end of third grade tend to graduate from high school on time,” Emily said.

A 2011 study by the Annie E. Casey Foundation found that a student who is not on the expected grade level for reading by third grade is four times less likely to graduate by age 19 than a child who has proficient reading skills by that time. The study also found that low-income students are 13 times less likely to graduate on time than their wealthier, more reading-proficient peers.

StoryPlace aims to mitigate some of the effects of poverty by providing free services, especially those that are part of its lifelong learning services program in each of its 20 branches throughout the county.

“Our focus areas are literacy, educational success, and economic opportunity,” Emily said, adding that planning takes place annually in the spring for a fresh program plan each fiscal year that begins in July.

“Every week of the year, we try to offer programs that educate people, and also help them grow, develop, and get jobs,” she said, “so that their whole lives, they continue to learn and grow.”

Economic opportunity is of particular importance, Emily said, since a task force report in Charlotte showed the city has a high number of people living in poverty.

“It’s hard to escape that for different reasons, so the library and other community agencies are working very hard to tackle that issue,” she said. “From a very young age, we want to give kids, and later on, adults, the opportunity to level the playing field.”

The library also participates in the “Money Smart” weeklong programs every April. The national initiative, which is a collaboration between the American Library Association (ALA) and the Federal Reserve Bank, is now in its seventh year. It provides programming and events for library users of all ages on issues, such as budgeting, managing student debt, retirement planning, purchasing homes, and preventing identity theft. The Charlotte Mecklenburg Library has focused its programming specifically on financial literacy and learning for 2- to 5-year-olds, covering issues such as the importance of saving, spending wisely, and sharing.

2025 Goal: For Everyone to be within 15 Minutes of a Library

Already at 20 library branches — which is a lot for a community its size — the Charlotte Mecklenburg Library is considered an urban library, Emily said, adding that it intends to build even more locations as funding becomes available.

“Our goal is, by 2025, for everyone in Mecklenburg County to be 15 minutes within a public library, by transportation or walking,” Emily said. “We want the library to be a welcome place for everyone.”

Library administrators are also working on renovations to the existing library branches to create more open spaces. They are also focused on growing a more multilingual staff and viewing staff more as educators.

“We are trying to be very strategic about everything we do,” Emily said.

The Charlotte Meckleburg Library wants to incorporate customer needs and wants into its services, such as meeting greater demand for e-books and adding flexibility to children’s services. One example includes a project called “StoryWalk,” in which three area parks posted 20 laminated pages from children’s books, to be changed every few weeks, so children could go around and read them while getting exercise at the same time.

Through these efforts, and by developing StoryPlace — an online platform that focuses on teaching children to read at a young age — the Charlotte Mecklenburg is doing its part to help young people get a head start on the type of education that could improve their future job prospects.