Even a 1% Interest Rate Change Makes a Difference: LowestRates.ca Gives Canadians the Tools and Education to Compare Prices on Financial Products 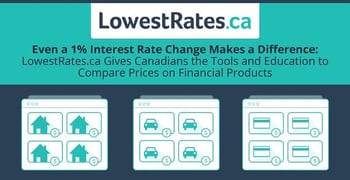 In a Nutshell: Some people may not realize that going online to compare personal finance products, like mortgages and auto insurance policies, is just as easy as comparing airline and hotel prices. Canada has such a website, LowestRates.ca, a company that aspires to be a one-stop shop and online information resource for personal finance products. While the site has seen success, Canada’s consumers have yet to fully discover the power of online comparison shopping when it comes to personal finance. And that education gap is the company’s biggest challenge. Most Canadians, by default, go to their local banks for all financial products and accept whatever is offered, which means they’re often missing the best deals. LowestRates.ca CEO and Co-Founder Justin Thouin recently told us about the benefits — both in savings and education — to comparison shop on the site instead.

If you get a speeding ticket in Ontario, your auto insurance could go up by a few hundred dollars. If you get three tickets, add another $300; and with four, your insurance could more than double. The type of ticket also matters; Tickets for minor infractions, like speeding, incur less of a price hike than more serious infractions like driving without insurance or careless driving.

When LowestRates.ca, which generated this information in a blog post, then posted it on its Facebook page, people were quick to respond with how much they were paying in auto insurance. One person, in particular, got a lot of attention because he was paying $4,600 annually on a 2005 Dodge Caravan, despite a clean driving and insurance record. Everyone commenting agreed he was paying far too much — including a LowestRates.ca representative, who invited the person to compare auto insurance rates on its platform.

LowestRates.ca is, in the words of its CEO and Co-Founder Justin Thouin, the “Expedia of personal finance products.”

“Instead of comparing hotels and flights, we compare mortgages, loan products, insurance policies, and credit cards,” Justin said. “We are a one-stop shop, where Canadians can quickly and easily find unique products to suit their needs, while saving time and money.”

Since it was founded in 2012, millions of Canadians have visited the website, and the Fintech company has completed hundreds of thousands of quotes for them.

“We’re making great progress, but there’s still a long way to go,” Justin said. “Canadians still, by default, tend to go to the major banks when they have a financial decision to make. The banks have such a stronghold in the Canadian psyche. People transact personal financial items through the bank, as their parents and grandparents did.”

Also, Canada’s top-five banks are the country’s most profitable companies, he added, which means ubiquity and massive advertising budgets stack the deck against smaller firms. Those factors have left little room for comparison sites to make their presence felt.

“Only 20% of Canadians use these websites, compared to 70% of Brits,” Justin said “It’s a challenge changing the Canadian mindset.”

While not every Canadian has turned to the web for information on personal finance products, those who have changed their mindsets have benefited, he added, giving three concrete examples. Take mortgages, for instance.

For auto insurance, LowestRates.ca compares rates from over 20 car insurance companies, and sometimes there’s a $3,000 difference between the least and most expensive options, he added.

Credit cards are another area with huge potential for savings based on cost comparisons. Typical credit cards are easily charging 20% on interest rates.

“If you have a $10,000 balance, you are paying $2,000 in interest per year,” Justin said. “We offer cards where you can sometimes have no interest for a year. Saving yourself $2,000 per year allows you to pay down some principal.”

LowestRates.ca posts user testimonials on its site that speak volumes. One person used the site to save money on car insurance.

“After having researched through various companies, I came upon the LowestRates website,” he wrote. “In just a few minutes after putting in my contact information, I was able to find quotes from various brokerages all in one spot! This cut the hassle out of me having to individually find these rates myself through various resources.”

Another happy user wrote, “After watching my condo insurance rise year after year, I realized it was time for a change. I did an online quote and received a quote that was less than half of what I was paying with very similar coverage. I called the broker and she was able to reduce my quote. Not only was the service incredible, I also saved $750 a year.”

“Financial literacy is so important. It’s important that Canadians ask the right questions and keep the right considerations in mind when making decisions,” Justin said. “A lot of times, they don’t think about it. It’s intimidating, or it’s boring. But it’s so important. We’re trying to be that bridge that the education system and government are not at the moment — to help them make these better decisions.”

Indeed, financial illiteracy in Canada seems to be a serious issue. A mainstream news article reported that over half of Canadians are only $200 away from insolvency, and two-thirds aren’t confident about handling their finances. The article profiles young Canadians who are struggling financially, along with what they wished they had learned early on — such as how to manage student loans; how to budget; how interest rates work; and how to manage credit cards and personal banking.

LowestRates.ca addresses these and other issues on its blog, called “MoneyMinded,” and posts news articles as a vehicle for educating Canadians.

“We hope to make personal finance more interesting, so Canadians can empower themselves to make the right choices and lead better lives,” Justin said.

LowestRates.ca faces challenges in becoming more of a household name in Canada, mostly due to a built-in tradition of turning to big banks.

“We don’t have hundreds of millions of advertising money to compete with banks,” Justin said. “For companies like ours, it’s really about becoming known, mostly by word of mouth, from consumers having good experiences.”

Another challenge is getting all of Canada’s major institutions — banks, insurance companies, and credit card companies — to post their best offerings on rates comparison sites, so that people can truly compare products.

“Some of them are leery to put their best rates on our sites,” Justin said, explaining that problem goes hand in hand with Canadians’ own default method of choosing a financial product: going to the banks. “As long as people are walking through the front door and Canadians are accepting the first offer, why would the banks put their best offer out there and cut their own margins?

“There has to be a tipping point, where enough Canadians stop going through the front door, before these institutions are willing to put their best rates on websites like ours.”

For now, the people behind LowestRates.ca said their goal is to seek out every financial product from every institution, and pair those offers with a robust comparisons engine to give users the confidence that they are truly getting the best deals available.

“We want to be the first place that Canadians go to when they have a financial decision to make,” Justin said.“At the same time, we want to continue to improve financial literacy, and make people want to learn about personal finance.”

Meanwhile, people can be mindful of their own financial situations. Justin gave us a couple of tips for consumers, especially those with less-than-perfect credit scores. First of all, he said, “Don’t give up. Take a hard look at what’s put you in the position you are in right now, and learn about the best ways to get out of it.”

Some possible ideas? “There are a number of different credit cards that can help you build credit,” he said. “Different institutions have different requirements for mortgages, so explore your options. And don’t get depressed because you do have options. You can improve your credit level, and when that happens, those options will widen and get better.”

How Long Does a Mortgage in Principle Last?