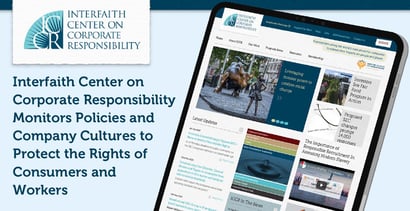 In a Nutshell: Since the mid-2000s, corporate responsibility has been top of mind for consumers in the United States. And the Interfaith Center on Corporate Responsibility is a leader in the effort to encourage corporations to enact those ethical and responsible policies. Its efforts have yielded multiple victories in eliminating predatory lending practices and products. Its ongoing efforts include seeking accountability for the housing crash of 2007 and supporting efforts to protect workers from debt. But ICCR doesn’t like to point fingers at corporations. Instead, it works on solutions that benefit the culture of financial institutions while also protecting consumer interests.

The U.S. housing crisis — a crucial driver of the Great Recession — began in earnest in 2007. Over the ensuing decade, the Federal Reserve estimates that as many as 10 million Americans lost their homes. And those numbers don’t represent a hiccup in the market, they testify to a systemic problem, deeply rooted in financial practices and ethics, that affected the entire nation.

Foremost among those affected were the people who found themselves without homes. Many found support through faith-based organizations, including food pantries and shelters, that tended to their immediate needs. And while those organizations could help with people’s everyday needs, they couldn’t do anything about the broader economic scenarios that led to their situations.

The Interfaith Center on Corporate Responsibility (ICCR) was launched to help fix some of corporate America’s overriding problems — some of which led to the Great Recession.

The ICCR brings religious communities, healthcare organizations, asset managers, and others together to positively influence corporate behavior. It accomplishes that through socio-economic, environmental, and political issues and shareholder advocacy.

“It’s a group of more than 300 investors of all kinds,” said Sister Nora Nash of the Sisters of St. Francis of Philadelphia, an ICCR Member and Advocate. “We are the shareholders, and we’re calling on the world’s most powerful corporations to address their impact on the world’s most vulnerable communities.”

In the context of a recession and financial ethics, the ICCR maintains a sharp focus on banks, economic policies, and operations. Those include institutional accountability, executive compensation, and fair wages for workers. The organization also sheds light on tax breaks and institutions that neglect the well-being of both workers and customers on the bottom rung of the economic ladder, among a host of other issues.

“There have been struggles, but the majority of my experiences have been positive,” Sister Nash said. “We may need to take a long time to get the result, but I believe in perseverance and persistence if the issue is really important.”

The issues Sister Nash referred to encompass practices that are detrimental to consumers and society at large. Two issues that ICCR has successfully helped eliminate at institutions are direct deposit advances and credit card solicitation on college campuses.

“I think ICCR’s engagements with the banking and finance sectors cover a broad area of responsibility from investing to numerous salient issues,” Sister Nash said.

Direct deposit advance was a term used by a particular bank to designate a product that resembled a payday loan. The bank would issue a cash advance for someone in need of funds, for example, to repair their car so they could travel to work. While that may seem like the bank held the customer’s best interests at heart, it was considered a predatory practice that trapped customers in a cycle of debt.

Sister Nora Nash, of the Sisters of St. Francis of Philadelphia, spoke with us about ICCR’s mission.

Sister Nash and her ICCR colleagues collected testimonials and brought consumers together on conference calls and through meetings to show executives how the program harmed consumers. After a multi-year process, the bank finally ended the program. But that was not the only predatory practice that concerned Sister Nash and the ICCR.

“We had major work on credit cards because of how many that were issued. And the fact that banks were coming onto college and university campuses and giving out credit cards and having pizza parties,” Sister Nash said.

Before 2010, issuers would set up booths on campuses and offer food, small prizes, and other incentives to students who signed up for a credit card.

Young college students often lack the financial wisdom to use credit cards responsibly. A slice of pizza or a Frisbee is a minor perk when weighed against the potential hazard of accruing thousands of dollars in debt.

Thanks in no small part to ICCR’s efforts, Congress passed the CARD Act in 2010. The legislation prohibited credit card solicitation on campuses and enacted safeguards to prevent undergrads from being victimized by predatory lines of credit. That can help students steer clear of crippling debt and stay on track for positive financial futures after college.

Sister Nash has emphasized helping people with their homes since the financial collapse of 2007. At the time, rising property values, low rates, and relaxed lending standards led many people to buy homes, while others leveraged their equity through second mortgages.

Unfortunately, there was little institutional accountability, and banks were happy to lend money to subprime borrowers who couldn’t afford to repay the funds. Things turned south when home values stopped rising, and borrowers didn’t have the money to make payments on their loans. Banks began foreclosing on homes in hopes of selling them and recouping their losses.

“People didn’t get the right information,” Sister Nash said. “From my experience working with these people — and there are hundreds — they went through a modification. The normal process is, the bank says you don’t have to pay for 90 days, and we’ll work it out. But, frequently, there was no way to work out the situation. And it got worse and worse for those families.”

Consumers who fell prey to lax lending practices may have also faced damaged credit profiles as well as higher taxes for loan modifications.

And they were often in extreme financial distress with no recourse for improvement. Sister Nash believes that the problem originates with the banks that took advantage of them, not with the borrowers and homeowners.

“The banks should be making restitution because, in most cases, these homeowners did nothing wrong. They just ran into a very bad situation, and that makes it very difficult. There’s nothing worse for me than losing your home, your credit, your good name,” Sister Nash said. “Banks provide a legitimate service, and they enjoy social license to protect the human rights of their customers and employees. It’s a tremendous violation of human rights to process a loan modification that doesn’t get the person back on their feet.”

“I’m thoroughly committed to human rights issues. I tell each company, ‘If your human rights policy is fully operative, you won’t have any of these salient issues,’” Sister Nash said. “Debt bondage is a less-understood aspect of human trafficking, which we also call modern slavery.”

Debt bondage occurs when companies hire migrant workers, promise them a job in another country, and pay for their sea or air travel. But laborers are saddled with the cost of that travel and must work to pay off the debt. Companies may also charge laborers additional fees to procure employment.

Upon arrival, workers may have their passports confiscated and be forced into exploitative labor situations. There are often no written contracts, no stipulation of work to be done, and no clear way of paying off debts and regaining their labor freedom and mobility.

“We’re doing a lot of work with that and in conjunction with the U.S. government,” Sister Nash said. “There have been several resolutions with companies to adopt a more comprehensive human rights policy to ensure their supply chains do not include debt-bondage workers.”

In the wake of the housing crash, many groups focused their ire on the companies, institutions, and individuals responsible. One notable example was the Occupy movement. Protestors took to the streets chanting slogans and waving signs calling for people to rise up against the 1%. They demanded grievances from the government that allowed the financial crisis to occur — and then bailed out the banks at the expense of the consumers whose lives were ruined.

Other groups issued more reserved and realistic calls for tax reform, increased regulation of financial services, and other solutions to the deep economic problems. Sister Nash and ICCR occupy the more moderate end of the spectrum, having dedicated themselves to finding mutually beneficial solutions.

That strategy allows banks to continue providing access to products and services that contribute to the high quality of life enjoyed by many in the United States. And it can also expand access to the underbanked who could gain significantly from more equitable access.

“If you do the right thing, it’s a win for both,” Sister Nash said.