Hoyes, Michalos & Associates — How a 30-Minute Conversation with a Licensed Insolvency Trustee has Helped More than 40K Ontario Residents Get Out of Debt 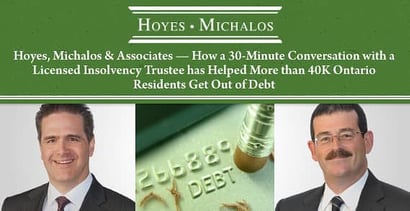 In a Nutshell: In 1999, accountants Douglas Hoyes and Ted Michalos established Hoyes, Michalos & Associates, a firm that has since helped more than 40,000 people in Ontario pay off debt. Clients receive tailored solutions following a free, 30-minute phone consultation with a licensed insolvency trustee. For many, the answer is a consumer proposal, in which a Licensed Insolvency Trustee collectively negotiates with creditors the amount the client will pay off. This is generally about one-third of the original debt, paid off in five years. The firm also handles bankruptcies and refers clients to providers that specialize in other debt-related services.

Americans’ neighbors to the north are no strangers to debt. Each year in Canada, more than 120,000 people file for bankruptcy or a consumer proposal, a popular alternative to handling debt in Canada.

Household debt, in particular, has been climbing steadily in the past several years, due to low interest rates encouraging Canadians to buy homes, and consumer debt is also on the rise: In the fourth quarter of 2016, Equifax reported that 37% of Canadians were borrowing more money. On average, Canadians have $22,125 in non-mortgage debt. Ontario, Canada’s most populous province, and home to the country’s most populous city, Toronto, has an average consumer debt just below the national average, at $22,022.

Consumer debt is an ongoing problem, and 18 years ago, Ontario-based accountant Douglas Hoyes took note of it. He had, until then, spent his career working at big accounting firms, helping businesses overcome debt. That’s when he switched his interest to consumers.

“Most people who have debt problems have never been in that situation before,” Douglas said. “It’s like being in a medical problem for the first time.”

Together with fellow accountant Ted Michalos, the two established a personal insolvency and debt management firm called Hoyes, Michalos & Associates. While locals can have walk-in appointments at one of the 24 offices located throughout Ontario, the vast majority of their clients call in, having studied the information on their website.

“If you have debt problems, it’s embarrassing. You don’t know where to turn,” Douglas said. “People like the fact that a website is anonymous. There is no pressure. People can read or watch videos on their own.

99% of Consumer Proposals Filed by the Firm are Accepted

In essence, Douglas explained, consumer proposals are “a way for debtors and creditors to come to an arrangement to deal with the debt.” It’s often a more appealing option for people than either credit counselors, where clients pay 100 cents on the dollar, Douglas said, or debt settlement, which is non-binding.

Consumer proposals are binding, and they work like this: If clients have debt on five credit cards, those five creditors get to vote on whether to accept the proposal. They get one vote for every dollar they are owed. If the majority of dollars agree, then the proposal is binding to all creditors (even the ones who voted no). Douglas said clients end up paying about one-third of the original debt. “If you owe $60,000, you probably end up paying $20,000,” he said, generally over a period of about five years.

The government regulates who can file for consumer proposals. Clients have to go through a licensed insolvency trustee, and accredited firms, such as Hoyes, Michalos & Associates, have a list of criteria for clients who are applying.

Among the requirements is that debtors can’t have more than $250,000 of unsecured debt, not including mortgages, and they have to be able to pay off a portion of the debt, either in monthly payments or one lump sum. People often choose proposals (instead of filing for bankruptcy) if they want to hold onto assets they might otherwise have to surrender.

The firm has an excellent track record for consumer proposal approval, with 99% of the settlement arrangements accepted by creditors.

“Debt Free in 30” — Personalized Plans Start with a Chat

The first step for clients is to pick up the phone and call 1-866-747-0660 for a free consultation on their debt situation. The firm advertises this service as “30 minutes to debt free.”

The 30-minute period isn’t enough time to clear a lifetime of debt, but it’s suitable to arrive at a personalized plan. Douglas describes this call as a “fact-finding mission” in which the firm ask clients for basic financial information, such as their income, assets, and amount of debt. People call in with a variety of scenarios, and the firm helps them explore their options, Douglas added.

“For some people, their house went up in value, so we tell them to get a second mortgage and to pay off their credit cards,” Douglas said. “Some people have to file taxes, or maybe they need help from a credit counselor to form a budget. We try to figure out the cause of the problem and the solution.”

“Everyone’s situation is different, and there’s no one-size-fits-all solution,” he added.

More Resources: A Bankruptcy Blog and an Upcoming Book on Avoiding Debt

Hoyes, Michalos & Associates is licensed for bankruptcy filings, and on its website, it provides a bankruptcy blog on topics such as minimizing debt as your family grows, budgeting during a job loss, and re-thinking taking out additional loans. The firm also refers clients for other services such as debt consolidation and credit management.

“We focus on the things that we are best at,” Douglas said. “We have a network of other providers to do other things that we don’t do directly for our clients.”

Douglas has helped more than 10,000 people overcome debt, and accrued two decades of financial wisdom. One takeaway is that debt is not often the result of undisciplined behavior, he said.

“Sure, that happens. But in a lot of cases, the problem is we think we are doing the right thing, but what we are really doing is following the crowd,” Douglas explained. “Just because your dad bought a new car every three years, doesn’t mean you should, too.”

People cling to such habits, or as Douglas calls them, “myths,” and they find themselves in trouble years later. Douglas explores these various myths in a book he’s written called “Straight Talk on Your Money.” Due out in early September (with a Kindle version available for pre-order on Amazon), the book also gives practical advice on how to avoid getting trapped in the myths.

Douglas has this advice for people: “Debt problems don’t typically go away on their own. You’re probably not going to win the lottery tomorrow. If you have debt problems, do your research, understand what the options are, and take action.”