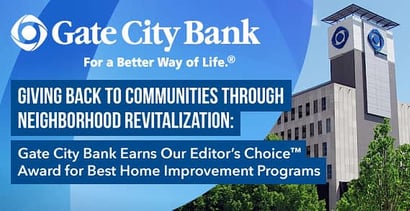 In a Nutshell: Gate City Bank has built its reputation on the generosity it extends to the communities it serves, such as its home improvement programs that provide low-interest loans to refurbish homes in neighborhoods that need revitalization. Started in Fargo, North Dakota, in 2005, the catalyst for the bank’s participation in this program was fostered from concerns regarding low enrollment in specific school districts within the city. Gate City’s four neighborhood programs differ slightly, but all have roughly the same eligibility criteria. Their collective success hinges on the bank’s collaboration with the cities, and has been aided by the bank’s reputation as the Roughrider State’s top mortgage lender. The programs and bank have received numerous awards, and can now add one more to the list — our Editor’s Choice™ Award for Best Home Improvement Programs.

In 2005, Gate City Bank partnered with the City of Fargo — North Dakota’s largest city. A city of 120,000, Fargo, which you might know best from the 1996 Coen brothers-directed film (or the spin-off TV series on FX of the same name) had experienced low enrollment in certain schools within the city.

The low enrollment was correlated to the limited number of owner-occupied homes by families with children participating in the school systems. Many of these homes were being rented, and this program was an opportunity to encourage revitalization in these neighborhood homes and to convince families to put down long-term roots in the area.

City planners asked themselves an important question: How do we revitalize those neighborhoods to encourage owner occupancy and homeowner investments in their own homes and neighborhoods? The search for answers to that question led to a partnership with Gate City Bank, a major North Dakota bank with headquarters in Fargo, and a remarkable new loan program.

Together, the city and the bank partnered in the first of four home improvement programs in both North Dakota and neighboring Minnesota. We recently spoke with Kim Settel, Personal Lending Manager at Gate City Bank about these programs and the differences they’re making in the communities they serve.

“The city of Fargo initially had a city-funded program, and was able to partner with Gate City Bank to provide an investment back into the community through these loans,” Kim said. “This aligns with our culture of helping everyone in our communities experience a better way of life.”

Gate City Bank has a lengthy history of community giving, and this manifests itself both financially and through employee volunteerism. Its home improvement programs provide low-interest loans for customers as part of neighborhood revitalization programs.

Because of the positive influence and success of these programs, we’ve chosen to recognize them with our Editor’s Choice™ Award for Best Home Improvement Programs.

The City of Fargo’s Neighborhood Revitalization Initiative (NRI) Program was Gate City Bank’s first Home Improvement Program, launched right in the bank’s backyard in 2005. To date, Gate City has made $8.15 million in low-interest loans available to the city. This program offers incentives for residents to renovate their owner-occupied homes.

The bank provides homeowners with low-interest loans for a variety of home improvements. The incentive is a low-interest second mortgage at 2.25%, repayable over a 10-year term, ranging from $10,000 to $75,000. Potential applicants can check out eligibility requirements for their homes, as well as instructions for how to begin the process.

These are just a few examples of homes in Fargo that have been improved through the program.

Gate City Bank’s other two home improvement programs are in Minnesota in the cities of Fergus Falls and Moorhead, both on the state’s western border, not far from Fargo. In both towns, the Neighborhood Impact Program (NIP) runs according to the same basic rules and criteria, and is designed “to keep neighborhoods strong and to help local homeowners reinvest in their homes.”

“When we launched the Fergus Falls program, a city representative said, ‘This program is so valuable because it speaks to everyone who may not have the flexibility in their current budget to make home improvements,’” Kim said.

Collaboration with Cities is the Key to Success

All of the programs have the same initial step, which requires each homeowner to contact the city to discuss the scope of the proposed projects, Kim explained. Homeowners work with the city to determine the extent of the project, and then the city refers the customer to Gate City Bank to secure financing for the project.

“It’s a very collaborative process between the city and the lender,” she added. “We definitely look at it as a community-involvement program.”

Each program has reciprocal benefits for the city and bank, Kim continued.  The bank has an opportunity to assist new and existing customers, and in turn, those customers benefit from low-interest-rate loans to make improvements to their homes. Plus, neighborhoods get revitalized.

Individual programs have certain qualifications and limitations, which are listed on the website for each city’s program. For example, minimum and maximum loan amounts are in place, Kim said. Within some programs, there are also criteria for borrowers’ income, she added. The city of Wahpeton, for example, has set a maximum income at $89,000.

Additionally, properties must meet specific eligibility requirements. In Fargo, for instance, houses must be at least 40 years old, not in the floodplain, and have a property value of less than $250,000. The projected cost of the work must be between $10,000 and $75,000. Similar criteria also apply in the cities of Moorhead and Fergus Falls, with the added criterion that houses must be more than 28 years old.

The precedent to Gate City Bank’s home improvement programs is its success as a mortgage lender. Over the years, it’s risen to become North Dakota’s top mortgage lender.

“We have a very strong presence in the communities we serve,” Kim said. “We maintain all the servicing of our mortgage loans. So, if a customer has a question on their loan, they call our office — not another servicing entity or bank.”

The bank has also solidified an excellent reputation in other areas over the years. Already in 2017, the bank has received seven awards, varying from best place to work to best area bank and loan officers.

And 2017 also marks the 11th year that Gate City Bank has received the Champion of Affordable Housing award from the North Dakota Housing Finance Agency. The award recognizes Gate City for its locally-sponsored affordable housing projects and events. Looking at the numbers, it’s clear why Gate City is worthy of recognition. In 2016 alone, the bank gave out 173 loans, totaling more than $29 million.