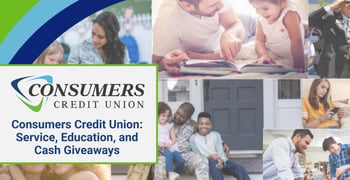 In a Nutshell: Consumers Credit Union started as a small organization but grew into a national institution that impacts communities and offers educational resources to its members. Its Dollars and Sense program, alongside other services, helps members learn better money management skills on the path to financial security. The credit union’s Sharing and Caring program offers cash prizes for members and charities that coincide with holidays and events throughout the year. Although it operates nationally, Consumers Credit Union employees are involved in local volunteer efforts to help the residents in every community prosper and grow.

Not many national financial institutions owe their existence to the dairy market, but Consumers Credit Union is a unique institution.

Autumn of 1910 saw milk prices rise from 6 cents to 8 cents per quart in Waukegan, Illinois. In response, an enterprising group of housewives formed a buying club so they could purchase milk directly from farmers. In 1911, the group became a cooperative dairy and expanded its offerings to include groceries, meat, and even gasoline. Then, in 1930, Consumers Cooperative Credit Union was formed to serve the members who operated it.

Since then, the credit union has weathered depression, recession, global conflicts, and changes in both culture and technology. But through more than 90 years of evolution, the institution has remained true to the vision that motivated its founding: advancing the financial wellness of its members and their communities.

“We are a group of members who are driven by a singular goal — making our lives better through a financial system that encourages saving and allows us to loan money to each other,” reads the Consumers Credit Union mission statement on its website.

Membership is open to anyone nationwide; it is not restricted by geography, profession, or any other criteria. And the institution’s benefits extend beyond its members to families and communities in the form of education, merit-based giveaways, and volunteer efforts for worthy causes.

One significant component of Consumers Credit Union’s financial education efforts is the Dollars and Sense program. The series of modules addresses various aspects of personal finance, from the basics to major life transactions, paying for college, and planning for retirement.

“They’re short little video lessons or tutorials based on different financial topics,” said Eric Shriey, Digital Marketing Manager at Consumers Credit Union. “It’s free, not just for members, but for anyone who goes on our site.”

One of the best teachers of financial literacy, though, is firsthand experience. So Consumers Credit Union offers a Student Choice Checking program through which teens can enroll with a parent or legal guardian as a joint account holder. They receive a debit card with a $310 daily limit and enjoy free electronic statements as well as online and mobile banking.

They also have access to more than 1,800 shared branch networks and 30,000 surcharge-free ATMs. And Consumers Credit Union provides ATM fee reimbursements of up to $25 per month (until their 18th birthday). The program helps young people get supervised, hands-on experience, and build their confidence in personal finance and money management.

Of course, not all members had access to financial education when they’re young. That’s why Consumers Credit Union partnered with Greenpath Financial to provide free content to its adult members. Greenpath provides debt counseling and financial coaching, homebuying counseling, debt management planning, and budgeting assistance, among many other financial literacy tools and resources.

Consumers Credit Union also provides access to Greenpath’s educational articles, seminars, and webinars. Members also gain access to a hotline that allows them to speak to a financial counselor to receive information and guidance about their specific financial circumstances.

The Consumers Credit Union Sharing and Caring program began in 2019 as a way for the credit union to give back to its member communities by distributing cash prizes throughout the year.

The giveaways align with holidays, including Magnificent Mothers on Mother’s Day and Outstanding Fathers for Father’s Day. In August — which is the start of the fall semester for most colleges and universities — the credit union’s Future Leaders event gave four lucky students $500 each for a dorm-room makeover.

Through the Caring & Sharing Program, Consumers Credit Union provides cash prizes to local charities and members of its communities.

Consumers Credit Union partnered with a local radio station to spread the word to potential entrants, who wrote short essays on whether they’d want to win a Nobel Peace Prize, an Oscar, or an Olympic gold medal. During the Thanksgiving season, the giveaway took the form of the Give Thanks, Make Bank challenge.

“We asked people to share on social media who or what they’re thankful for during the holiday season,” Shriey said. “Four winners received $250 for themselves, and the winners also get to select one of five local charities that also received a $250 donation.”

Like membership in the credit union, entry into these Sharing and Caring giveaways is open to people across the nation.

“In the beginning, we kicked around the idea of calling it Local Heroes, and that would have strictly limited it to the communities where our branches are. But, instead, we decided to open it up nationwide because we are open across the country to all members,” Shriey said. “It wouldn’t be fair just to call it Local Heroes because it is open to all of our membership.”

Volunteer Events Give Back to Community Service Centers

Although Consumers Credit Union thinks nationally, the institution acts locally by getting involved in the communities it serves. And the credit union’s marketing manager works closely with service centers to get each location even more involved.

“She works with them throughout the year, and they look at different events that are in their communities,” said Sunny Muehleman, Consumers Credit Union Marketing Coordinator. “For example, our Palatine service center donated to a food pantry. We also have some other locations who organized a 5K run with police officers.”

That approach empowers each service center to follow its local interests and choose which organizations and efforts to support. That sort of autonomy fosters commitment and involvement from employees.

“It’s coming from the service centers and what will best serve their members in their areas — instead of someone who’s removed from that specific community telling them what they have to do,” Muehleman said. “I think that’s great. It’s increased the involvement of the employees and the members who are in those communities.”

Consumers Credit Union also encourages its employees to give back by providing them with one paid volunteer day per year. Typically, entire teams will choose a volunteer opportunity to participate in together.

“Our sales team did Feed My Starving Children. Our technology department went and did the Northern Illinois Food Bank. Our marketing dept went to Bernie’s Book Bank. It’s not only a great team-building opportunity, but it’s great to help out the community,” Muehleman said.

Consumers Cooperative Credit Union counted 61 charter members when it was founded in 1930. By the end of its first year, it held $367 in assets. The institution emerged as Consumers Credit Union and now holds more than $1.2 billion in assets, and boasts nearly 110,000 members across the United States. And it maintains an ongoing commitment to helping people lead healthier financial lives.

After finding success in its first year, the Consumers Credit Union team plans to keep the Sharing and Caring Program going full steam ahead. The credit union also plans to reorganize all of its online financial education resources. That means its resources from Dollars and Sense, Greenpath, and Consumers Financial Group — which offers investment guidance — will all be available in a single location.

“Right now, they’re all housed on separate pages, but we’re working on consolidating them all so people can easily find the resources they’re looking for,” Shriey said. “All those different modules are going to be housed under an easy-to-find section of our website where people can quickly watch a webinar, read a blog, or take one of the Everfi modules.”

That reorganization will make it easier for members to focus on a specific topic and points of concern. And it will put them in a position to make more empowered financial decisions.