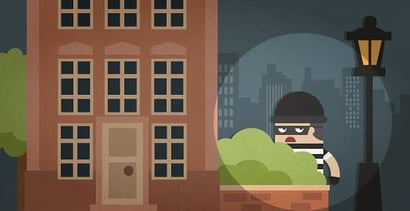 Every year, the U.S. Federal Bureau of Investigation releases data through the Uniform Crime Reporting (UCR) Program that shows the number of known violent and property crimes reported by law enforcement agencies across the U.S.

We analyzed data from the most recent report (2013) to determine the 20 cities where residents, statistically speaking, would be more at risk of becoming victims of a property crime.

If you have bad credit, property crime is just something you can’t afford — paying off your existing (or worse, overdue) debts is hard enough. for example, auto loans don’t suddenly become null and void if your car gets stolen.

If you live in one of these 20 cities, take some time to safeguard your home and belongings.

San Diegans might be a bit confused to see themselves rank anywhere on this list after being named by Business Insider the 20th safest city in America. However, their analysis only included violent crimes such as murder, rape, and robbery.

But the raw data show only 19 other cities had more property crimes than San Diego, California. Speaking of lists, San Diego was also the number five wealthiest city in the U.S. according to Forbes — perhaps all that wealth creates plenty of attractive targets for criminals.

With its prime location along several major interstates in the heart of the United States, Oklahoma City has had its fair share of crime with several Mexican drug cartels trying to establish control over the city. Naturally, a turf war like this in part explains the city’s number of property crimes.

Jacksonville, Florida, is the most populous city in Florida and the largest city (by land area) in the United States, so naturally, there’s bound to be plenty of crime going around with such high urban congestion.

Fort Worth’s downtown area was once known as “Hell’s Half Acre” back in the late 1800s due to its collection of attractions like saloons and gambling parlors. While the city is nowhere near its lawless Wild West days, the spirit of its rough and rowdy beginnings lives on in its crime rates.

Tucson, Arizona, not only has property crime rates higher than a majority of the U.S., but its violent crime rates are well above national averages as well. Perhaps the blazing Sonoran desert sun is making everyone a little too hot under the collar.

As if ranking number 15 on our list wasn’t bad enough, Seattle, Washington, was also named the 20th unhappiest city in America, according to Bloomberg Businessweek. Maybe everyone’s really sad all their property is being stolen or damaged.

Being ranked on lists like these is a double-edged sword. Many Americans don’t readily associate Memphis with high crime like other cities on this list, and relying entirely on UCR may unfairly portray a city as a hub of criminal activity.

However, citizens should welcome MPD’s commitment to providing true and accurate data — we can only guess which other cities didn’t make the list due to agencies’ lack of transparency and thorough knowledge of crime in their hometown.

Detroit, Michigan, has had a full plate when it comes to problems recently. When the major automakers in the area tanked during the Great Recession, the city dipped into bankruptcy and urban decay, causing many of its citizens to turn to desperate measures to make ends meet.

If we were to include violent crimes in our rankings, Detroit would easily be in the top five of our list — if not number one — for the most dangerous city in America.

Austin, Texas, might have high rates of property crimes well over national averages, but aside from that, it’s generally a very agreeable place to live — job openings for nearly every career field, plenty of live music and entertainment and year-round weather that would make plenty of northerners jealous.

If you’ve been following local Indianapolis, Indiana, news lately, you’ll know property crime isn’t exactly their most pressing issue at the moment — the city was recently ranked the number nine murder capital of the U.S. for 2014.

People come to Sin City looking to get lucky — but more often than not, misfortune becomes their sole consolation prize. While police probably aren’t counting stacked house odds as “larceny,” plenty happens outside the casinos to whittle away at the wealth of residents and visitors alike.

As one of the most progressive and tech-savvy cities in the U.S., San Francisco, California, has a lot of things going right. Unfortunately, multiple gangs operate in the area, looking to capitalize on the wealth of the law-abiding citizens in San Fran.

It appears Dallas, Texas, like its neighbor Fort Worth, has a property crime problem. Even worse, Smart Growth America declared it among the most dangerous cities for pedestrians in 2014 as well.

Neither the weather nor its citizens’ dispositions are always sunny in Philadelphia. The city is home to several hundred homicides a year, a large concentration of organized crime rings and some of professional sports’ rowdiest fans.

Sure, it’s bad enough that Phoenix, Arizona, has an incredibly high rate of violent and property crime — but to make matters worse, it was named the “Kidnapping Capital of the U.S.” by ABC News due in large part to drug trafficking activity through the area.

San Antonio has had its fair share of property crime, dating back at least to 1836 when the Spanish stormed the Alamo Mission. While locals don’t have to worry about invasions anytime soon, property crime continues to be an issue, as well as human trafficking.

Los Angeles, California, is already a pretty crazy place. Nestled in the shadow of the world capital of cinema, there’s plenty of wealth floating around the streets of L.A. and its suburbs — and plenty of targets for criminals looking to make a quick buck.

Don’t let the headlines about a sudden drop in crime in Chicago fool you — apparently local authorities in power have been using “magic ink” to publish misleading data on local crime rates. Crime — both violent and property-related — is still very prevalent in the Windy City.

Houston, Texas, like many other major cities near the Mexican border, is a hotspot for drug and human trafficking. Naturally, with so much severe crime in the area, it’s not surprising to see high rates of property crime as well.

Surprised to see Texas so well-represented on this list? Perhaps the issue is statewide — researchers at WalletHub named the Lone Star State as the fifth most unsafe in the U.S.

New York City, New York, is a great many things to an even greater number of people, but anyone strolling the streets of the city that never sleeps knows just how dangerous it can be.

While crime has fallen from its crack epidemic heyday in the ’80s and ’90s, it is still home to some of the most prolific criminal activity in the world.

See how your city compares here.

Thinking you need a home security system now? Consider taking out a small personal loan to cover the expense.

Cities were ranked according to total known reported cases of robbery, arson and property crimes, which include both larcenies and motor vehicle thefts.

We do not intend this study to be a critique of any specific law enforcement agencies or practices.