What is Quantitative Easing? 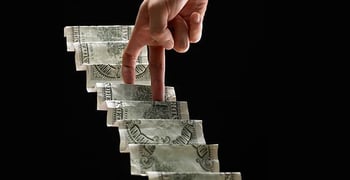 A lot of us have heard the term over the last few years, but few of us can describe it accurately in a conversation. I am talking about quantitative easing.

This monetary policy enacted by the Federal Reserve Bank, or the Fed, is one of the tools available to stimulate growth in the economy when things are slow.

That part we may all know, but…

What exactly is it?

Quantitative easing, usually just referred to as QE, is a way of pumping more money into the financial system. It works when the Fed buys U.S. Treasury bonds and other assets on the open market from banks and other institutions that hold them.

This has the effect of pushing more money (liquidity) into the system. By driving up the supply of money available for the banks to lend, the Fed hopes to stimulate lending to businesses, thus creating economic growth.

The Fed has a responsibility as part of its mandate to maintain financial stability and create jobs through setting monetary policy. How it does this is by raising or lowering short-term interest rates, making it either less or more attractive for businesses to borrow and grow.

“After the financial crisis however, the Fed

In other words, there was little else they could do on that front.

Then they began quantitative easing. The process of bond buying and adding liquidity to the market also has the effect of lowering long-term interest rates. Currently the Fed is a consistent buyer of $85 billion of bonds each month as part of their third round of quantitative easing (QE3).

In order to understand if the Fed’s QE policy is having a positive impact on the economy, let’s take a look at a few key indicators of our economic growth:

When QE3 was initiated in September of 2012, the average 30-year mortgage rate was 3.55 percent. In May of 2013, it dipped to 3.35 percent. Home sales, one of the key measures of economic prosperity, increased by 17 percent over that period.

The unemployment rate when QE3 began was around 8.7 percent nationally. Currently, it’s hovering at around 7.3 percent.

Gross domestic product (GDP) is a measure of the goods and services our economy produces. It is currently running at a growth rate of around 2.5 percent. This is better than when the economic crisis hit, but it is around the same level as before QE3 was initiated.

As you can see from these numbers, the success of QE3 is mixed. While it does seem to be moving us in the right direction, it is far from the engine of economic growth we need.

The better question at this point might be: What happens when the Fed ends its QE policy? The jury is still out on that one, but every indication is it will not happen any time soon.

What is Bad Credit?

What is an Adjustable Rate Mortgage and How Does it Work?

What is a Jumbo Loan?

What is a Specialty Data Report?