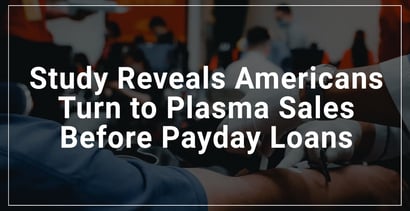 Eric Bank has been covering business and financial topics since 1985, specializing in taking complex subject matters and explaining them in simple terms for consumer audiences. Eric's writing regularly appears on Credible.com, eHow, WiseBread, The Nest, Get.com, Zacks, Chron, and dozens of other outlets. A former software engineer, Eric holds an M.B.A. from New York University and an M.S. in finance from DePaul University.

Americans aren’t shy about borrowing money. A Federal Reserve survey found that 77% of US households have some form of debt. On the other hand, most indebted Americans (53%) list debt reduction as a top priority, with millennials expressing the most robust dislike of debt.

A new study, entitled “Blood Money: The Financial Implications of Plasma Sales for Individuals and Non-Bank Lenders,” shines a fascinating light on our feelings toward debt, especially the high-interest, predatory variety, and just how far some of us will go to avoid it.

US Households Donate Plasma at a Higher Rate Than They Use Payday, Auto-Title, or Pawn Loans

Four years after a new plasma center opens in a community, the local population’s inquiries about payday and installment loans drop by 6.5% and 8.1%, respectively, among individuals under 35 years old. Moreover, young borrowers with access to plasma centers were 18% less likely to take out a payday loan.

The study’s authors estimate that Americans save between $180 million and $230 million in predatory borrowing costs each year because they have access to plasma centers. The findings attribute much of the impact of plasma center access to non-banked individuals who infrequently borrow rather than those caught in a predatory loan debt trap.

Given a choice, it seems that Americans would prefer to use income from selling their plasma than resort to high-interest loans.

Donating plasma for money is a big business. It involves donors providing blood for plasma extraction in return for cash. Plasma is a blood component that contains antibodies, electrolytes, vitamins, and clotting factors that help manage blood pressure, clotting, immunity, and nutrient transport.

The plasma-derived medicine market had an estimated value of $33.4 million in 2021 and is expected to surpass $53.1 million by 2028, according to industry numbers.

The study focuses on donating source plasma via apheresis for money. Initially, new donors receive a check-up, undergo blood tests, and respond to health history questions. You can’t donate if the supervising doctor detects signs of drug use that can contaminate your plasma.

The donor’s weight determines the amount of plasma they can donate. They must weigh at least 110 pounds to sell up to 690 milliliters (mL), while those who weigh 175 pounds or more can give up to 880 mL of plasma.

The medical evidence regarding plasma donations is thin. Generally, the side effects of donating plasma  —  bruising, faintness, and fainting  —  are less severe than for donating blood.

The process can lead to mild citrate toxicity because the returned blood contains anticoagulants. The evidence of possibly undesirable protein loss (increasing a donor’s vulnerability to infection) is mixed.

Little research exists on donors’ quality of life or illnesses not transmissible through the donation process. Some researchers suggest that giving plasma may help treat high blood pressure and high cholesterol, possible health benefits for donors.

Pharmaceutical corporations that run plasma centers pay American donors between $30 and $70 per donation. You can donate up to twice per week or 104 times per year.

Under the most aggressive scenario, an individual could collect $70 x 104, or $7,280 per year. Donors receive payment through prepaid debit cards.

The study’s authors estimate that between 2.54 million and 3.7 million US adults provided 64% of the global plasma market in 2019. More than 1 million US donors sell plasma 20 or more times per year at a compensation rate of $30 to $50 per collection. These donors earn an annual income that ranges from $630 to $5,200.

Interestingly, the plasma centers do not report donor payments to the IRS because each one is below the $600 threshold. But donors should report earnings greater than $400 as self-employment income.

You would do this by filing IRS Form 1040-SE and paying the Medicare and Social Security taxes. If you are skeptical about this self-reporting, the study authors share your mindset.

Additionally, plasma centers do not report donation income to the three major credit bureaus, and thus donating does not affect a donor’s credit score.

The study’s authors estimate that Americans save between $180 million and $230 million in predatory borrowing costs each year because they have access to plasma centers.

Plasma centers aggressively pursue new and returning donors through advertising and by offering them referral payments, rewards, raffles, and volume increases in compensation. Donor payments account for 40% to 60% of the total development costs of plasma-derived medicines, compared to just 10% to 15% for the entire pharmaceutical sector.

Regulatory barriers to plasma collections (from both the Food and Drug Administration and the Plasma Protein Therapeutics Association) affect demand for related therapies. These barriers result in:

Growth in the US

US plasma centers are responsible for collecting two-thirds of the global supply. The last two decades have generally seen significant industry material growth and consolidation.

The demand for plasma drives the expansion of plasma center access, with the number of US plasma centers increasing from 400 to 1,000 between 2012 and 2021. During that period, the country’s plasma collection more than doubled.

The study authors seek to gauge the relative importance of plasma sales as a fast source of cash for low-income households. The authors compare plasma sales to payday loans and gig income.

Their findings indicate that the populations of plasma donors and payday loan borrowers share similar characteristics.

The study authors looked at 2018 through 2019 survey results from a sample of low-income online tax filers. They found that 3.3% of households donated plasma one or more times in the previous six months, more than those taking payday, auto-title, or rent-to-own loans, but fewer than borrowers of pawn loans.

Other types of gig work represented 7.4% of the sample, but the period was over a year instead of six months, making it possible that the difference is much less significant.

The survey sample shows that a donor’s age, income, and education are the most decisive factors determining whether they make plasma donations. Typically, donors are individuals who:

The number of plasma donors has increased during the pandemic. Moreover, COVID erased the demographic differences between donors, payday borrowers, and gig workers. These groups have low liquid assets, poor credit scores, and higher debt. Plasma donors have shorter planning horizons, are less likely to pay their credit card balances in full, and are more likely to miss payments.

The study’s takeaway is that plasma donation is relatively common among financially vulnerable households looking for help to pay essential expenses.

The study evaluates plasma sales as an alternative to payday loans and gig work. Selling your plasma offers you certain advantages:

There are but a few disadvantages to plasma sales relative to gig work and payday loans:

Implications of the Study

The study’s authors seek to provide a causal relationship between the ability to sell plasma on demand and the use of non-bank credit such as payday and pawn loans.

Previous studies established that plasma donors usually have low incomes and poor credit scores. They also tend to favor non-bank credit and are less likely to access bank loans. These facts suggest that non-bank credit is a significant source of money to help households pay bills, although only 5% of plasma donors intend to repay debt with plasma income.

By donating plasma, you can avoid taking a predatory loan or help repay one you’ve already taken. Study results bolster this thesis by showing that introducing plasma center access into a community reduces inquiries for non-bank loans, indicating decreased demand for credit among infrequent borrowers.

The study did not show that plasma center openings affected the repayment or rollover of existing payday loans. But it did not rule out decreased demand for non-bank installment loans due to plasma center access.

The authors also observe that new plasma center access has the most substantial dampening effect on non-bank loans sought by younger people (i.e., below 35 years old). This effect peaks three years after a plasma center opens.

How Donors Spend Their Donation Income

Previous studies showed that 58% of households sell plasma to help pay for essential goods. Another 19% use the money to pay for discretionary purchases, and 5% earmark the earnings for debt repayment.

To check these earlier findings, the current study’s authors tested whether the income from plasma donations boosts local store foot traffic. They found a 7% increase in visits to essential goods establishments and a 10% boost for non-essential goods stores two years after a new plasma center opened.

From a public policy perspective, the findings suggest that access to small-dollar, quick sources of income may substantially boost local economic activity.

Some older readers may remember the old Jack Benny joke: A mugger accosts Benny and demands, “Your money or your life?” Benny is silent. After several seconds, the mugger asks, “Well?”

The current study addresses a similar question: Your money or your blood?

It finds that the ability to donate plasma reduces demand for non-bank credit, especially for individuals under age 35. This effect leads to savings of more than $180 million annually for consumers living near plasma centers and a substantial boost to foot traffic at local stores.

The ethical implications of selling one’s biological material for money is a subject of debate among policymakers. Selling your plasma may allow you to avoid expensive payday loans and support your current spending.

“One potential policy tool for reducing reliance on high-cost debt is to ensure that low-income households have access to low-barrier sources of quick, discretionary income, even if only available once or twice per week and for small-dollar amounts,” the authors conclude.

We need more medical research about the costs of possible adverse outcomes to know whether donating plasma improves household welfare.

Eric Bank
Eric Bank has been covering business and financial topics since 1985, specializing in taking complex subject matters and explaining them in simple terms for consumer audiences. Eric's writing regularly appears on Credible.com, eHow, WiseBread, The Nest, Get.com, Zacks, Chron, and dozens of other outlets. A former software engineer, Eric holds an M.B.A. from New York University and an M.S. in finance from DePaul University.

How to Make the Most of a Debt Consolidation Loan