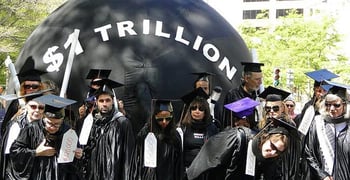 A new report published by the Institute for Policy Studies (IPS) finds student debt is rising faster at state universities with the highest-paid presidents.

The report, titled “The One Percent at State U,” is the result of a study looking at the 25 public universities with the highest executive pay when compared to the nationwide four-year university average.

It examined statistics from 2006 through 2012 and found a disproportionate compensation structure for executives at the top 25 schools.

• The sharpest rise in student debt levels occurred in schools where executive compensation rose the fastest.

• At state schools with the highest-paid presidents, administrative spending outpaced scholarship spending by more than two to one.

• Executive pay at the top 25 schools increased more than twice as fast as the national average to nearly $1 million on average.

Where does your alma mater’s president rank?

According to The Institute for College Access and Success (TICAS), student loan debt reached $1.2 trillion in 2012, overtaking total credit card debt for the first time in history.

And with part-time adjunct faculty at universities making an average annual wage of just more than $22,000 per year, we know the increasing costs aren’t going to them.

So one has to ask — are university professors worth the salaries they receive?