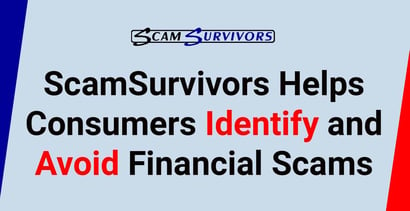 In a Nutshell: Scams have been around since the internet’s inception. Though the details have changed with the times, the basic premise of most online fraud — from catfishing to fake ATM cards — remains the same. ScamSurvivors, an online resource that launched in 2012, aims to help users know if they’re being conned. It is run by a team of experts that responds to fraudsters and gets as much information as possible about them. The website posts scam scripts and stories from those who have been defrauded, which helps others avoid falling into the same traps.

Wayne May started scam baiting in 2015. The process typically involves communicating directly with scammers, rather than ignoring their emails or calls. When he received an email telling him that he’d won money, instead of deleting it, he asked the scammer to tell him more.

What’s the point of scam baiting?

“Sometimes it’s just to waste their time. Sometimes it’s to get something funny at the end of it. But most of the time it is to gather information about the scammers infrastructure like fake websites and the methods used by the scammer to collect money. This can be in the form of Western Union, bank account, or Bitcoin information that can be reported to authorities,” Wayne told us.

About a month into scam baiting, he received a message from someone pretending to have connected with him on a dating site. May wasn’t on any dating sites because he was married, so he knew he was being scammed. He played along, and soon began concentrating primarily on romance scams.

“Because there were so few of us dealing with romance scammers, people would email me and say, ‘My family member or my friend has been scammed by this person. He or she was convinced they’re genuine. Would you fake the scammer?’” May said.

Stories like those, in which victims may lose not just their money but their trust in people, broke May’s heart.

After scam baiting for several years, May and a group of like-minded people decided to start a website where they could share these stories and the scammer scripts they uncovered. ScamSurvivors, which launched in 2012, now includes stories about many types of scams, from blackmail and sextortion to work-from-home frauds.

May is the name behind ScamSurvivors, but many individuals operate the site.

“We are very much a group of equals. It was just that I have more technical knowledge in creating a website than they do, where they have more knowledge in how particular scams work,” May said.

Scams Are Often Repurposed For Repeated Use

Over the last 10 years, May and his collaborators on ScamSurvivors have learned something important about fraud prevention: new scams are rare. Rather, most scammers use the same basic premise, only changing a few elements.

For example, scammers are using a new twist on the romance scam. A scammer posts a profile on a dating site, meets someone, and convinces them to invest in bitcoin. This is similar to older frauds in which scammers would ask individuals on dating sites to invest in other types of schemes.

“Now they’re coming up with different reasons and ways for you to send the money,” said May.

Even sextortion scams haven’t changed considerably in the last 15 years. May used the same software and webcam to record scammers and create “broken webcam” videos as scammers do today.

“It’s a program that’s used more often than not. So, a lot of the technology is old but has been repurposed,” May told us.

ScamSurvivors is also seeing the proliferation of fake charities that claim to support the war in Ukraine. This is an issue that’s been in the news lately, but it is not inherently different from older charity scams.

Fraudsters often use contemporary issues to update their scams. Fake websites selling PPE, face masks, and rubber gloves also became a common scam during the COVID-19 pandemic. Obviously, illegitimate websites have been around since the early days of the Internet, but they still play off current events to defraud consumers.

“For example, they’ve evolved from ‘I’m dying of cancer,’ to ‘I’m dying of COVID.’ A death scam was the very first email I ever replied to back in 2005. They’re still going on now, almost identically to how they were back then,” May said.

How to Protect Yourself From Online Fraud

With so many frauds always in play, Internet users may worry about staying safe online. May offers some advice.

For one, he suggests using Google’s reverse image search. Scammers typically steal the photos they use, so if they pretend to be someone, that person is likely to have a different name and identity than the one used by the fraudster.

“Often, just a simple Google image search on the picture can help people say, ‘You have deceived me.’ It quite often will turn up something and say, this is another person,” said May.

He also suggests searching potentially shady scripts on Google. Scammers typically have prewritten messages they will send to users, and scam baiters like the ScamSurvivors team may have posted these online.

So if users search for unusual phrases from messages, they are likely to find these scripts posted word-for-word online. Many scripts may misuse a word or include a typo — like mixing up the words defiled for defied.

If a user does find a script, though, May doesn’t recommend sending it back to the scammer because then they’ll change it. New scripts are not searchable. He says the same thing about email addresses. If someone reports a fraudulent email, then the scammers will just pop up with new, untraceable contacts.

ScamSurvivors Advises Readers to Research Everything

If people are unsure about a communication they receive, they can look up their issue on ScamSurvivors. The website posts every scam tip it receives, as well as the frauds it finds in its so-called catcher account.

A catcher account is one that is prone to receive more scams than the average address. When someone replies to a fraudulent email, then they’re likely to receive even more scam correspondences.

“You will be put on this thing called a sucker list. So what we did is create our own sucker list and put it out there onto the internet for the scammers to find,” May said. “But anytime they write to one of those, they’re actually writing to somebody who’s going to waste their time, who’s going to report all the information they can get about them on the Internet. I can receive up to 70 emails a day.”

After they scam bait the fraudster to receive as much information as possible, May and his team post what they’ve discovered on their website.

“We will write a short, ‘I’m interested, tell me more’ and then let them ramble on. You’re trying to get them to do as much work as they can with as little work as possible on your end, until you get to the end of their script,” said May.

May has even compiled some of the most egregious stories into a book called “The Stupid Scammer Files.”

After 17 years of scam baiting, May has one piece of advice that he offers to everyone online.

“Research everything. Absolutely everything. If you’re unsure, ask somebody else for their opinion. Because a scammer will try to keep you separated and try to tell you to keep this a secret,” he told us.