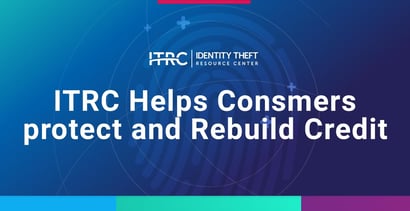 In a Nutshell: The Identity Theft Resource Center (ITRC) has offered free remediation and recovery services to identity fraud victims since 1999. Its resources cover situations ranging from credit card scams to unemployment fraud. The ITRC can help victims mitigate the effects of fraud on their financial and overall well-being. It also teaches consumers that the best way to avoid identity theft is a proactive approach to safeguarding their sensitive information.

When consumers think of identity theft, many picture data breaches, the dark web, and malicious fraudsters, but they may not suspect someone they know, or even their employer, of using their information for illegal purposes. However, that type of identity fraud happens often, and it can be an unsettling experience.

“Our co-founder’s employer stole her identity in the mid-1990s, and this was before we had any real knowledge of what that meant,” said Eva Velasquez, President and CEO of the Identity Theft Resource Center (ITRC), which helps people combat and prevent many types of fraud. “Identity theft victims were often treated as criminals. They were treated as the fraudsters themselves, and there was no uniform process for recovery or to help people remediate. So she turned that terrible experience into the Identity Theft Resource Center.”

Today, fraud can strike from anywhere, and it is much more common than it was 25 years ago. Fortunately, consumers have more avenues of relief today, thanks in no small part to the ITRC. The organization was established in 1999 with a mission to help identity theft victims through free remediation and recovery services.

“Even though there are a number of paid services, not everyone can afford them,” Velasquez said. “They don’t have the disposable income to hire an attorney or pay a company to help them recover and clean up their identity.”

The ITRC’s robust collection of free resources and tools allow those consumers to reclaim their identities and move forward with their lives.

Everyone is a Potential Target for Identity Theft

Consumers may think they’re safe from identity theft and fraud because they make under a certain amount each year or their credit has a relatively low limit. But they are still vulnerable.

“Your identity credentials are valuable no matter what your true financial picture is,” Velasquez said. “They can be monetized in so many different ways.”

Credit card, banking, and insurance information are just a few types of information targeted in identity theft. But fraudulent use of other sensitive data, including financial information, personal identifiable information, and identity credentials, is also on the rise.

One lesser-known way thieves use stolen personal information is government identity theft, which occurs when fraudsters use stolen credentials to scam the government — and the actual owner of the identity credentials. In particular, unemployment fraud has become increasingly prominent since the onset of the COVID-19 pandemic.

The information used in these scams was already exposed through prior breaches. The surge in unemployment requests gave bad actors an easy opportunity to leverage that stolen data.

“This was a great opportunity for the thieves. They have taken us to the cleaners,” Velasquez said. “We’re looking at, from some estimates, upward of $300 to $400 billion in fraud.”

Unemployment fraud is just one example among many, and its increasing prevalence emphasizes the importance of safeguarding sensitive information. It also underscores the critical role ITRC plays in helping the public.

“We have been relevant since our founding in 1999, and as the landscape changes and has changed over the years, we continue to be more necessary and relevant,” Velasquez said. “We still provide free one-on-one recovery and remediation services to the public at no cost to them.”

Victims of identity theft, and those who think they may be victims, can contact the ITRC through multiple channels. These include its toll-free call center, live chat on its website, and social media platforms. Even if consumers are just concerned about the fraud and want to learn more, the ITRC encourages them to get in touch.

“We are heavily involved in risk minimization, best practices, and education,” Velasquez said. “And we do get those calls where people will say they’ve had some exposure to a data breach, ‘OK, I know my password or credentials have been compromised, I followed the steps on the breach notification, but what else can I do?’ And we have resources for them.”

The ITRC uses an artificial intelligence platform called ViViAN (Virtual Victim Assistance Network) to better serve all callers. ViViAN, which was developed and initially funded by a grant from the U.S. Department of Justice Office of Victims of Crime, help identity crime victims and curious consumers when live operators and advisors are not available, after hours and on weekends.

“She’ll help to direct people right to what they’re looking for so they can get access to it faster,” Velasquez said. “When we have victims call in who need tailored remediation plans and they need to talk to somebody, our advisors will help them. ViViAN can help a lot of consumers who have basic identity-related questions.”

Fraud can significantly damage personal finances and credit scores, but the harm extends beyond the time and effort spent fixing the problem.

“We do an aftermath report every year,” Velasquez said. “We survey the people we helped in the previous year, and we ask them questions about how this has impacted their lives, and it’s more than how much time and money they spent fixing it.”

Identity theft also impacts other areas of life beyond finance. It can lead to emotional and psychological problems, including anxiety, difficulty focusing, and physical issues like insomnia, stomachaches, and headaches.

Then, there are the lost opportunities. A wrecked credit score — even if they’re not at fault — can prevent people from getting a home loan, a better job, or a student loan. All of those can hold down financial potential.

“Even with the consumer protection laws we have, the notion that you’ll be made financially whole, it doesn’t always work out that way,” Velasquez said. “The best example I can give is if you have an existing credit card account that has unauthorized charges on it — which I think is something that just about everybody with a credit card can relate to — you’d report it. Generally speaking, the charges are reversed, and you’re issued a new card. The impact to you is that you may not have access to that line of credit for a week to 10 days.”

While many consumers can get by without a credit card for that long, losing a debit card can cut someone off from access to the money in their bank account. That could impact rent or mortgage payments, utility bills, putting gas in the car, or feeding a family. That means identity theft can affect not only finances but someone’s quality of life. The ITRC believes that the best way to avoid those negative consequences is to remain vigilant and always be proactive.

Consumer financial information is often exposed to fraudsters through large data breaches, which occur more often than anyone likes to admit. Luckily, the ITRC is on that case as well.

“In addition to the work we do in the victim space, we’ve also been tracking publicly reported data breaches in the U.S. for the last 17 years,” Velasquez said. “We issue an annual report and quarterly analysis that not only provide data — the info about how many breaches have occurred and how many people were affected — but we look at the specific data points.”

These reports use about 90 data points to measure a breach’s impact. However, it’s important to note that these reports do not use any of the consumer data. The ITRC does not have access to any of that information, which could make the organization itself a target for hackers and create a greater risk for the public.

That attitude toward data illustrates the best way to avoid identity theft: minimizing data exposure and, if possible, refraining from exposing it in the first place. That isn’t always possible, but it is something to strive for.

Velasquez said holistic models and policies for identity theft and data security are becoming more prevalent. In the meantime, free resources for victims are essential because the best defense against fraud is vigilance and a proactive approach.

“We need to be less reactionary and put more resources into our infrastructure to build it up and make this a priority,” Velasquez said. “And that is good for everybody.”