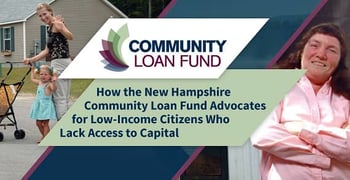 In a Nutshell: Despite a clientele list of borrowers traditional lenders would consider high-risk, the New Hampshire Community Loan Fund hasn’t lost a single investor dollar in 33 years. The Community Loan Fund uses donations and investor dollars to make loans directly to, and on behalf of, low-income people, families, and communities in its state. With the fund’s help, residents who would otherwise have been denied conventional loans by banks have secured capital for mortgages, business growth, and other life-changing ventures. The organization focuses not only on credit score and debt-to-income ratio, but several other factors, like payment history and life situations, to determine creditworthiness.

One of America’s most ingrained rites of passage into adulthood is home ownership. Having at least four walls and a roof to call your own is a dream that many grow up with, but not everyone gets to experience.

All across America, average rent prices are rising monthly with little softening seen in the market. And obtaining a traditional mortgage can be more difficult than it once was as banks have tightened their belts following the housing crisis of the last decade

Since 1983, the New Hampshire Community Loan Fund has helped Granite State residents obtain the needed funds to reach dreams like home ownership, as well as growing a business. The average borrowers may not meet the requirements of a traditional lender, but they can still show a positive payment history that proves creditworthiness.

The Community Loan Fund was started as a labor of love by private citizens. It has grown into a Community Development Financial Institution (CDFI) that finalized its 1,000th Welcome Home mortgage loan in January 2016. Welcome Home Loans, which provide mortgage loans for manufactured homes, saved borrowers who had previously rented an average of $852 annually in housing costs.

“You could be a low-income person who has faithfully paid your rent the entire time, totally met all of your needs, but you pay 50% of your income for rent,” said Juliana Eades, President of the New Hampshire Community Loan Fund. “When you go and try to buy a house with that same exact payment, they wouldn’t let you because they have ratio requirements that are lower than that.”

“Our borrower loss rates are very similar to a bank’s loss rates,” Juliana said. “It’s not that these people are more risky. They just look more risky.”

New Hampshire has the 13th highest cost of living in America. That makes traditional home ownership difficult for people already spending most of their income on rent and other bills. Other affordable housing options, like manufactured homes, are available, but obtaining a mortgage for those structures can be difficult at best.

Many banks do not offer mobile home mortgages. Some offer loans based on automobile rates, which have interest rates that can climb into the teens. Since mobile homes often fall into the automotive category, there’s a blue book that shows depreciation for the home over time.

“But just like any house, it’s not about how old it is, it’s what condition it is in,” Juliana said.

To help those looking to purchase a mobile home, the Community Loan Fund has a set of standards different from those of mainstream mortgage lenders.

“We’ll lend no matter what the age of the house is,” Juliana said. “There’s no minimum credit score required. Our interest rates are the same. A lot of places advertise a low rate, and you go in and by the time they have information about you, it’s a lot higher than they advertise.”

“If you went to a bank to get a loan on some of these houses, you’d need to put 20% down,” she said. “We’ll lend at 5% down because you can afford it, you just can’t come up with the down payment. That’s because we don’t have mortgage insurance, and those are all mortgage insurance rules.”

Since 2002, single manufactured home loans have been available through the fund’s Welcome Home Loan program. Mortgage lending evolved from the fund’s ROC-NH program, which helps residents in manufactured home parks secure the land under their homes by cooperatively purchasing their communities.

“A lot of times when people’s parks come up for sale, we’ll help the people that live there organize and form a corporation to buy the park themselves,” Juliana said. “So basically they rent from themselves as a group. The first thing they always say is, ‘But how would we get that money?’ and we say ‘Whoever owns it is financing it somehow, and we’ll help you finance it.’”

An example of ROC-NH in action took place in 2015, when residents of Bob’s Mobile Home Park in Milan, New Hampshire, learned that the land their homes were on was to be auctioned off. Rumors over who would buy the land and how that would affect rents spread uncertainty among park residents. Then, the morning it was to be auctioned off, the Community Loan Fund helped the residents purchase the park. Now, those residents own the land and the homes they reside in. It’s one of several such stories Community Loan Fund customers tell.

Providing Loans for the Underserved

While homeownership is a goal of many Americans, it isn’t the only facet of Community Loan Fund’s work with its local citizenry.

The fund also provides loans for job-creating small businesses ownership, nonprofit housing developers, and nonprofit and childcare facilities. Capital can be just as difficult to obtain for these organizations as a mortgage is for low-income individuals and families.

“You maybe can’t get a bank loan because you don’t have enough collateral or because the recession has put a dent in a lot of people’s profitability,” Juliana said. “We can do our own analysis and structure the loan in a way that works better for you than what a standard bank loan would look like.”

These types of loans, which might have been denied by other lenders, have helped entrepreneurs expand businesses. Juliana said that one of the fund’s goals for business lending is to open opportunities for more jobs to be created, which gives low-income residents, even those without a college degree, an improved chance to succeed.

“With any business, its most valuable asset is its employees,” she said. “We work with companies that agree with that belief. It will help a company be more profitable if it does a good job with personnel management.”

Lack of access to capital is not always a product of lower incomes. Extenuating circumstances sometimes arise that make loans both necessary and difficult to obtain. The Community Loan Fund aims to look beyond just a number in a credit score and bases its assessment of creditworthiness on the person applying for the loan.

“We will actually underwrite to your behavior,” Juliana said. “Say that you were a victim of domestic violence and you fled your house, and there were a lot of bills in your name that you either couldn’t pay or weren’t paid by your spouse. You could be in a situation where you couldn’t borrow for years while recovering from that. With us, if you can show us you’ve paid your bills for the last six months, then we can see what your creditworthiness is, no matter the history of your credit score.”

That local, customized perspective has paved the road to many dreams in all 10 counties of New Hampshire. From home loans to loans that saved existing businesses, the Community Loan Fund has created opportunities that traditional lenders wouldn’t attempt.

Recently, the fund made a loan to The Whole Child Center in Tilton that allowed the child care provider a chance to fix its facilities and give raises to its teachers with the savings from refinancing.

One of the First CDFIs Sets a Standard that Others Follow

There are CDFIs all over the country with similar goals as the Community Loan Fund. Some specialize in specific types of loans, and others have diverse clientele. The main goal of each is to serve the underserved with capital that can extend the American dream to new doorsteps all over the country. Whether it be a new home, a business, or a vital community nonprofit, organizations like the Community Loan Fund take donation and investment dollars and turn them into real, productive loans that make goals more attainable.

And while the future gets much brighter for clients impacted by Community Loan Fund, it’s equally bright for the organization itself. As its focus expands, so does the demand for capital, something that Juliana says is the main goal for the fund’s future.

“Our first ambition is to keep up with the demand,” she said. “I’d hate to have someone come to us with a chance to buy their park, and we have to say ‘Sorry, we don’t have any money this week.’ We want to make sure that we have enough capital for people.”