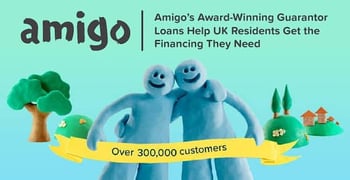 In a Nutshell: For people without much of a credit history, or a history with negative marks, obtaining needed loans can be challenging, if not impossible. Many turn to payday loans, which might only add to their problems, given the exorbitant interest rates and endless debt cycles that are often associated. Bournemouth-based lender Amigo stepped in more than a decade ago with another solution for UK residents in need of funding: guarantor-based loans. Borrowers obtain loans through guarantors, typically friends or family members willing to vouch for them. The trust element pays remarkable dividends, and Amigo has helped hundreds of thousands obtain loans to fulfill their dreams, while often improving their credit scores in the process.

UK resident Carolyn Lipczynski had poor credit but wanted a baby and needed expensive in vitro fertilization treatments to get there. With the help of a co-signing guarantor, she secured a loan and is now pregnant.

Another UK resident, James King required a £2,000 loan to achieve his dream and start a recruitment company. The loan, which he secured in 2016, was all the money he had to his name at that point, and in his first year of directing Sparkings Personnel, he made £2 million and is on track to reach £4.5 million in his second.

Former expatriate Scott Heslin had lived outside the UK for too long, and, therefore, couldn’t obtain a mortgage loan. Like Carolyn and James before him, Scott turned to Bournemouth-based Amigo and qualified for a £1,000 guarantor loan. He’s since been accepted by Barclaycard and is on track to be approved for a mortgage.

Amigo has many similar example of people who have sought its help, after being unfairly turned away from other loan providers. As its name implies, Amigo has been a friend to thousands of UK residents who needed help.

Started in 2005 by James Benamor, Founder of The Richmond Group, Amigo provides guarantor loans. For those unfamiliar with the process, a guarantor — usually a family member, friend, or colleague — shares the responsibility of the loan with the borrower, agreeing to make payments on it if the borrower defaults. The borrower benefits by leveraging the credit history of someone more qualified to receive a loan, while the guarantor’s typically close relationship with the borrower adds another layer of trust that loans will be paid off.

Amigo is now one of the most recognized lending brands in the UK, and it currently has around 160,000 customer loans. We recently spoke with Glen Crawford, CEO of Amigo, about how the lender helps people achieve dreams through financing.

Doing One Thing Only, and Doing It Really Well

Like a lot of successful businesses, Amigo thrives on specialization — doing only one thing, but doing it really well. It provides loans, with a representative 49.9% variable interest rate charged daily, and it doesn’t charge any up-front fees.

“What you see is what you get,” Glen said. “We also have, as part of a customer charter, a rule that we will never charge a customer more interest if they default than they would have paid had they stayed on track.”

He estimates Amigo has helped more than 300,000 people, most of whom contact Amigo online.

“The information gathering [on both borrowers and their guarantors] is also done online,” Glen said. “We look at the guarantor’s credit file and scale the guarantor — they have to meet affordability requirements. For the borrower, we insist that they have at least £100 left over after paying the loan every month.”

The payouts are generally very quick, he added.

“Loans are typically paid out in 24 to 25 hours,” Glen said. “That’s twice as fast as 18 months ago. We’ve become much more efficient.”

That time frame is also faster or comparable to most other lending organizations, which only deal with one party, instead of two, like Amigo does.

“We do have competitors,” he said. “But we’re maintaining our position as the dominant player on the stage.”

One option many people who use Amigo might otherwise resort to are payday loans (also known as cash advances), or small, short-term unsecured loans, which rely on a client having previous employment and payroll records. Often viewed as precarious — and even predatory — for borrowers, they come with enormous interest rates, and the risk of defaulting on payday loans can reduce borrowers’ already poor credit score and often lead to seemingly endless cycles of debt. Amigo takes a more forgiving attitude toward credit scores.

“We look behind a traditionally generated credit score and take a much broader view,” Glen said. “It’s easy to accidentally damage a credit score. We believe in getting to know the individual and the individual’s circumstances, and we take the view that bad things happen to good people.”

Glen also noted that, with responsible repayments, borrowers’ credit scores generally start to improve within six months to a year of taking out a loan through Amigo.

The whole process hinges on a guarantor agreeing to co-sign a loan for a friend or relative with a damaged credit history.

“The guarantor is prepared to vouch for the integrity of the borrower,” Glen said. “They know they are standing behind the borrower and taking responsibility for payments being made. If the guarantor doesn’t pay, we will make contact with them. We make sure the guarantor understands they really are part of this. That level of understanding is absolutely crucial to this working properly.”

The way it works is that the loan is paid to the guarantor, who then pays it to the borrower. Only on rare occasions does the guarantor have to step in and make a payment for the borrower, Glen said, which he points out typically only happens if someone has had a particularly bad month. He estimates Amigo receives about 11% of payments from guarantors.

“The reality is it works,” Glen said. “The proof is that we are a long-standing business with a lot of trustworthy customers. We have a lot of return customers, despite their improved ability to go elsewhere.”

“People trust Amigo as a brand,” Glen said. “We look at their faces, and speak to them, and try to understand how they stumble. We speak in plain English. We do exactly what we say we’re going to do. There’s no small print. Everything is clear. It’s a simple, friction-free process that is human and intelligible, and we are helping them at a time when a lot of other people turn them down.”

Amigo’s trust factor is evident in the numbers. The company has an 85% market share and is growing rapidly, and it’s considering going public in 2018.

Glen told us Amigo’s office culture reflects its mission of helping people and encouraging personal responsibility. The Amigo office has an open, non-hierarchical environment, where 280 people work in a culture based on ownership.

“We have a loyal workforce and low turnover rate,” Glen said. “Our focus is always on improving the customer journey.”

Ultimately, that means lending a human touch to people, as well as much-needed financial resources. Whether it’s financing weddings that parents can’t afford — and having the parents serve as guarantors — or covering IVF treatments for a woman who might not otherwise be able to have a child, Amigo is positioned to help.

“There is a wide range of human circumstances,” Glen said. “It’s the human nature of the business.”