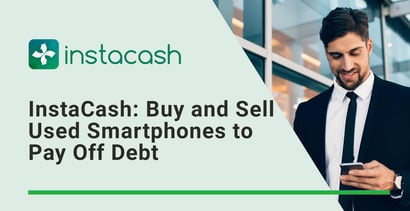 In a Nutshell: InstaCash offers a streamlined process and fair compensation for consumers in India who want to sell their used smartphones. Its digital evaluation platform verifies a device’s age and functionality, and an in-person inspection determines whether it requires repairs or refurbishment. Sellers receive payment immediately following the review, which creates a level of trust between the parties. InstaCash plans to expand its footprint and improve digital evaluation methods to enhance the process of physically examining devices. That will make it even easier for people to earn cash from their used devices.

Electronics manufacturing is one of the largest industries in the world, and given the nature of modern connected society, that’s unlikely to change any time soon. But beyond offering convenience, electronics add a significant amount of waste to the environment.

Science News reports that consumers and companies generated 53.9 million tons of e-waste in 2019. Of that amount, about 17.4% was recycled, meaning only about $10 billion worth of raw materials was salvaged out of an estimated $57 billion industry.

That’s where Prateek Goel saw an opportunity. The entrepreneur saw that he could make a difference in the amount of hazardous waste ending up in landfills and make an impact in consumer bank accounts.

“In 2016, I was working on electronic waste management,” Goel said. “I was trying to understand what could be the next idea I should work on. And I was taken aback by the problem electronic waste was generating in India.”

Goel’s solution to that problem is InstaCash, a platform that purchases used smartphones from consumers and refurbishes them for resale.

That not only helps keep hazardous waste out of the environment, but it also helps sellers earn money for their unwanted electronics, and buyers get better deals on the devices they need — while avoiding debt in the process.

According to Goel, the recycling part was easy. The difficulty was managing the supply. His solution was an offline collection network to keep e-waste out of dumpsters and in the hands of people who need reliable devices.

“It is very common in India that we value all stuff. We don’t just throw it away,” Goel said. “The first person who will use it will pass it on to the second person and third person, and it will have many lives.”

Refurbishing and Resale Give New Life to Old Phones

InstaCash began in the broad business of consumer durables — including televisions and appliances — before transitioning exclusively into the smartphone space. This move presented the opportunity to develop a diagnostic platform that expedites the valuation and buying process. That helped expand the market from which InstaCash could buy, not just locally in India but also in other countries. Those now include electronics-heavy China, where many consumers have old devices they need to sell.

“The idea was to reach the consumer directly,” Goel said. “And also through exchange programs, whether it’s on ecommerce platforms or it’s big retail chains.”

But in India alone, the opportunity to refurbish and resell smartphones is enormous. According to Goel, more than 150 million smartphones are sold each year, less than 5% in the organized sector. Countless others are sold informally — with no guarantee to the buyer about the quality of the device.

InstaCash adds a higher level of trust to the secondhand market. It assesses the functional and cosmetic condition of used smartphones through its digital and physical inspections. It repairs and refurbishes them as needed, providing a reliable device to the next user.

“Everything we buy comes to a central location, so we know whether it needs a minor touch up or it needs a heavy-duty repair,” Goel said. “Once we start valuing items, good stuff starts coming in. People who know that their product has good value start to sell.”

Operations like InstaCash are more manageable in the United States and Europe, which are historically tech-heavy markets where consumers have more understanding of — and trust in — the evaluation and appraisal process. In India, however, this structure is novel. Many consumers were wary of handing over their devices with only a promise of payment and, in their minds, a possibility of winding up even deeper in debt after falling victim to a scam.

That circumstance was a big motivator for InstaCash to implement its digital assessment and diagnostic process. Once a phone is verified as functional, a courier conducts a physical inspection. A digital payment is triggered when the phone passes muster. The seller gets instant compensation, hands the phone over to the courier, and the deal is done.

“We maintain that you get your money from us, and that creates a huge market potential and a huge trustworthy factor,” Goel said.

The process does increase costs, but not significantly. Goel said the sticker price of the phone rises by only about $1. That keeps the resale price low and within reach of consumers in the secondary market, helping them avoid unnecessary debt.

Just as significantly, it enhances the seller’s experience. Handing the device over to the courier, rather than placing it in the mail or putting it in a drop box, creates a personal interaction that enhances trust and boosts InstaCash’s brand integrity.

“It gives us a chance to emotionally connect with the customer,” Goel said.

Buying a used phone offers two significant advantages. First, the buyer saves money by purchasing a secondhand device rather than spending money (or accruing debt) on one that’s new in-box. Second, were they to buy a brand-new phone, its price would plummet as soon as they take it out of the packaging, immediately reducing its resale value.

Of course, depreciation continues over the device’s lifespan. The time a phone has spent in use will naturally influence the price at which consumers can sell it. InstaCash values phones based on three broad age ranges: Zero to three months, three to six months, and six months to a year.

Other factors may also affect a used smartphone’s value. In India, for example, providing the original packaging can increase value because it proves that the phone isn’t stolen. Those considerations are weighed against the current base price of the phone, not the original sale price.

After a year, depreciation typically bottoms out at around 35%. Even if a device has been sitting around for some time, sellers can still earn a decent amount of money to pay off debt or buy a new device by selling it to InstaCash.

InstaCash brings new value to old phones in India, but Goel doesn’t plan for his enterprise to stop there. InstaCash is working with strategic investors to launch the platform in eight other Southeast Asian countries.

Of course, InstaCash depends on the physical evaluation of phones, which is currently a manual process conducted by the couriers. Now, it is exploring AI and machine-learning solutions to expedite the selling process.

Goel describes the process as simply holding the device up in front of a mirror and using it to take a photograph of itself. The InstaCash system can then verify the device’s condition and diagnose problems, including scratches on the case or cracks in the screen. Moreover, it can conduct that evaluation at any point without a commitment to sell, allowing anyone to get an idea of their device’s value before they sell it.

“This gives us a new potential to minimize the risk and also a new window to launch protection programs,” Goel said. “We want to build an ecosystem around the device and make it simple, so the experience has to be like new, and that’s where we bring the whole overall expertise around the device.”