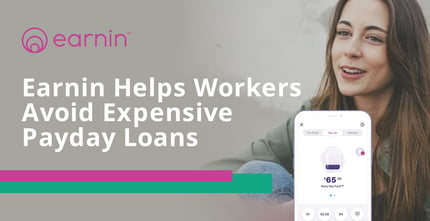 In a Nutshell: Millions of workers in the U.S. struggle to make ends meet, living paycheck to paycheck. With limited options, they often turn to resources like costly payday loans to help get them through thin times, but these loans tend to prove financially damaging in the long run. Earnin is an app that helps people avoid costly short-term loans with its Cash Out feature that lets users receive up to $100 per day or $500 per pay period from their next paycheck. Earnin also features a suite of other tools to help people budget and save money. The company listens to user feedback and encourages its community members to share valuable financial tips with one another. Earnin’s first-ever $10,000 Tip Yourself Sweepstakes launched on October 26.

History books will remember 2020 as a challenging year for the U.S. as it grappled with the COVID-19 pandemic and a contentious political landscape. Unemployment rates have skyrocketed and millions of those who remain employed still struggle to make ends meet. And, unfortunately, that was the case even before the pandemic.

Seventy-eight percent of workers in the U.S. live paycheck to paycheck, according to Earnin, a financial app that aims to help workers gain more financial security. Low-wage workers are often forced to turn to less than ideal means to meet their financial needs, such as payday loans that often come with crushing interest rates. Payday loans can sometimes help workers in the short-term, but it sends many of them into an even worse cycle of debt than they were in before.

Earnin allows workers to access up to $100 per day — and up to $500 per pay period — from their next paycheck, with no hidden fees or interest. The handy app not only steers people away from payday loans, but it also helps people develop healthy saving habits and reduce medical debt.

“Earnin started when we questioned why people wait two weeks to get paid,” according to a spokesperson from the company. “That works for companies, but not for many people. We imagined a different way — where each individual could decide when to access their pay. That’s
now become a product that millions have used.”

The company firmly believes that people should not be restricted access to the money they have already earned, the spokesperson said. About 65% of community members surveyed said Earnin increased their ability to pay bills on time.

Cash Out Lets Users Access Their Money Before Payday

“Earnin has created innovative technology that is consumer-friendly, transparent, and affordable for people who have been excluded from the traditional financial system,” according to the company.

Earnin’s central function is its Cash Out program.

Any employee with direct deposit into their checking account can use Earnin.

Earnin empowers workers by giving them access to up to $100 per day from their next paycheck to help make ends meet or pay down debt.

It doesn’t matter where someone works, the size of their company, or the capability of their company’s IT department, Earnin is a portable tool for ordinary people, according to the company.

“The top reasons people utilize Earnin are for gas, groceries, or food, avoiding overdraft fees, utility bills, unintended emergencies, and rental payments,” the spokesperson said. “It’s not a loan, because this is money people have already accrued, they just haven’t gotten their paycheck yet from their employer.”

This product follows Earnin’s business model, which is all about empowerment. That means that Earnin users even control the cost to them by paying what they think is fair for the services they use.

“We are giving our Community Members (our customers) the agency and freedom to determine an amount they think is fair, one that fits within their budget, to pay for the services we offer,” according to the company. “This makes us cheaper and more affordable than other Earned Wage Access providers in the marketplace.”

Earnin has been downloaded more than 10 million times and maintains an active base of nearly 2.5 million users.

“Our products were built from the ground up with the 125 million-plus Americans living paycheck to paycheck in mind,” the spokesperson said. “We developed a way to transparently, swiftly and affordably transfer people’s earnings to them in real time, and they choose how much they want to pay for it.”

The spokesperson said that 85% of Earnin customers tip on the platform.

In addition to Cash Out, Earnin users gain access to a whole suite of tools to help them with money management, budgeting, and saving.

“Tip Yourself is a tool for community members to set financial goals and put money aside, enabling them to achieve targets in a new way,” the spokesperson said. “Earnin users can set up a new Tip Jar for different goals, such as a vacation or a car.”

When users accomplish tasks they are proud of, they can fill their Tip Jars to celebrate and congratulate themselves, while also moving a step closer to their goals. Additionally, users can share why and how they’re setting aside money, which can help encourage the rest of the Earnin community to reach their financial objectives as well.

Earnin features a range of tools to help users budget, manage, and save money.

Earnin’s Balance Shield product makes it easy for users to monitor their bank account balance so they avoid overdraft fees. Balance Shield Alerts notify users when the balance in their account falls below a predetermined threshold.

“Submit your unpaid medical bills for review and allow our team to help negotiate for a lower total and/or better payment options,” according to the Earnin website. With approximately one-third of American workers in medical debt, this feature can prove extremely valuable.

Earnin also facilitates a Cash Back Rewards program through its app.

“Enroll one or more cards, then shop and dine at partnered businesses,” according to the company. “Earn extra cash automatically and cash out when you want.”

Earnin also understands the personal and sensitive nature of people’s finances, which is why the company takes security seriously.

“Security is a high priority at Earnin and we work hard to keep your info safe and secure,” according to the company. “We take privacy and data security seriously and follow industry best practices. We are hosted on SOC 2 certified third party infrastructure.”

The company also fulfills its mission with its user base and Earnin community in mind.

“We have a user research team that conducts usability studies on an ongoing basis to develop new products and features and improve our services overall,” the spokesperson said. “We also leverage the reviews of our app that are published in the App Store and Google Play Store to get a sense of customer feedback.”

Earnin also conducts studies on financial trends to get a sense of the economic challenges its community is facing. A recent study found that its customers’ wages are growing faster than the national benchmark, according to the company.

“We also have an exciting Facebook community called Helpin, which launched at the beginning of the COVID-19 pandemic,” the spokesperson said. “The group brings Earnin community members together outside the app and provides a space for people to ask questions and help each other through these challenging economic times with direct assistance or resources.”

The spokesperson said that, for example, one Helpin member named Richard Nielson has been offering free plumbing services to those in the Florida and Georgia areas, sometimes even traveling up to eight hours. Another member collected feedback from the group on tips to improve credit and consolidated all of them in one thread for the community to access and use. So far, the group has more than 13,000 members and 600-plus resources have been shared.

“We also recently launched the ‘People of Earnin’ blog where we showcase our community members’ stories and journeys,” according to the company. “We are all working to improve our financial situation, so we want to recognize those who are succeeding and provide a source of inspiration to those who are still progressing towards their goals.”

Earnin continues to look for new ways to help its users save money and make ends meet.

“In light of the economic challenges people are currently facing, we are launching our first ever Tip Yourself sweepstakes — a $10,000 sweepstakes to help our community on their savings journey.”

The sweepstakes officially launched on October 26. Earnin will select 100 participants to each receive $100 in their designated Tip Jar within the app.

“Through the initiative, we hope to support more community members in their journeys towards financial wellness,” the spokesperson said.

Listia: Sell Unwanted Goods and Get Items for Little or No Cost

Planswell: Free Financial Plans for Everyone