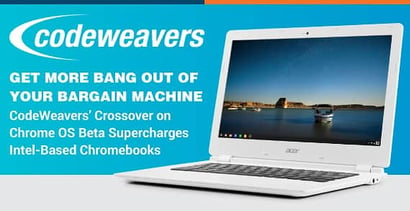 Ray has more than a decade of journalism experience, writing for publications such as The Gainesville Sun, Miami Herald, and Investment Times. He’s covered everything from Bitcoin and blockchain technology to real estate investing and the stock market, but most enjoys sharing creative ways to budget and save money to make income go further. He works closely with various firms and individuals to learn more about traditional and alternative investments in his spare time, and greatly enjoys watching and reading about classic films from the silent period through the advent of color.

In a Nutshell: Chromebooks are rising in popularity as the small size — and smaller price tag — lure customers away from pricier machines. But limitations of the Chrome OS and its inability to run Windows-based applications, like Quicken or Microsoft Office, has kept some consumers from making the jump to a Chromebook. Five years ago, CodeWeavers set out to prove that Windows applications could be run on an Android operating system. When Google assimilated much of the Android technology into its Chromebooks, CodeWeavers pivoted its research and developed the CrossOver on Chrome OS for that growing market. The beta version of the operating system is available as a free download in the Google Play Store and supports an ever-growing list of Windows programs for Intel-based Chromebooks.

Making a lifestyle change during a 4,600-mile trip across the globe would seem like a questionable idea to most people, but James Ramey isn’t most people.

James always travels with his MacBook to complete vital tasks on business trips, but dragging heavy luggage through the world’s airports prompted him to rethink the arrangement. A recent excursion from Minneapolis to Warsaw, Poland, by way of Paris, was the first time he left his Apple product at home and opted for a smaller, lightweight Chromebook.

Certain that he’d get less work done with a different computer, he found himself wondering why he hadn’t made the switch earlier by the end of the trip.

Across the country, more and more consumers are making the change to Chromebook. Chrome OS overtook Mac OS in the US in terms of shipments for the first time during the first quarter of 2016. Many consumers find the small, portable laptops are just what they need to complete tasks on the go and at home.

Aside from the size and weight, Chromebooks offer a price point that few other machines can touch. Many models are available for as little as $150, which makes them ideal for budget-minded consumers who want fast internet access without spending upward of $1,000 on a premium laptop.

One main complaint about Chromebooks, though, is their inability to run popular Windows-based applications on the Chrome operating system.

CodeWeavers, the company for which James is President, may have hit on a solution to that problem, and in the process, made Chromebooks even handier. The current beta version of the company’s CrossOver on Chrome OS is available for free in the Google Play Store and offers Intel-based Chromebook users the capabilities of running some of their favorite Windows applications on their device.

“Programs, like Microsoft Office, or even your grandma’s knitting program can possibly run on a Chromebook,” James said. “That lowers the cost of ownership.”

The development of CrossOver on Chrome OS started about five years ago when CodeWeavers began to wonder if it could get a Windows app to run on an Android operating system. As the company’s programmers proved it could be done, Google began using more of Android’s technology in its burgeoning Chromebook product.

“The initial idea was that there would be a bevy of Intel-based phones and tablets that would make the software compelling,” James said. “Then, Google absorbed most of the Android technology into its Chromebooks, so lo and behold, the software works on Chromebooks, too.”

Most tech-savvy consumers take heed to the word beta. While some see testing new games and software as a badge of honor, others opt to wait until the wrinkles are ironed out before downloading a new piece of software.

James said that users shouldn’t be concerned about the term when taking CrossOver on Chrome OS for a spin.

“We call it beta not because we’re concerned about the product, but because we’re learning more about what Windows applications our customers are wanting to run and we’re trying to broaden our support for a wider array of those applications,” he said. “Until we feel as if we have those feet underneath us, we’re keeping the product in beta.”

James said he expects the product to remain in beta until late 2018. The time will allow the company to add to the rapidly growing number of programs for which it offers support. Many beta testers have looked for access to financial and productivity software like Quicken and Microsoft Office. Others have requested access to hobbyist programs like remote control device or gaming programs.

“Just yesterday, I got a note from a customer who wanted to run Quicken 2001,” James said. “The software has been out of support for 17 years and we were able to get it running on a Chromebook. These are things that are taking place in days and weeks instead of months and years.”

The software is currently available for a one-year free trial. After that, James said he expects the program to cost users between $2 and $5 per month.

“We’re hoping that we can develop a broad enough support base for the applications that consumers are looking for, which will make the value proposition justify that price,” he said.

The software is currently limited to Intel-based Chromebooks only, which is a small portion of the available devices. Recent releases like Pixelbook show that Google may be leaning toward Intel processors in future products, making CrossOver on Chrome OS ever more attractive to future Chromebook converts.

Other add-ons, like Google Chromecast, strengthen the capabilities of the machines with streaming and mirroring capabilities. James said Chromecast allowed him to mirror his Chromebook screen onto a hotel television during his European trip.

“A lot of people complain about the small screen size, but in the near future I expect to see new strategies implemented in hotels and other places that will have Chromecast readily available for users,” he said. “When that happens, there will be no reason for anyone to carry a heavy laptop or MacBook around with them.”

CrossOver on Chrome OS beta isn’t the first time CodeWeavers has worked to help consumers access their favorite programs on a variety of devices. The company has been in business for 21 years and is the commercial face of the open-source Wine project.

Wine’s mission for more than two decades has been to make Windows applications accessible on operating systems like Linux, macOS, and BSD without the use of an emulator. Similar movements have popped up over time, but fail to gain the traction that Wine has.

“One of the main problems people have with open-source projects is that there is always a lot of initial interest, but with a lack of funding, that interest wanes and the product dies. We’ve been able to continue this project for 21 years and are still growing.”

Wine has a team of 20 developers working full time on open-source projects mostly funded from the sales of CodeWeavers products. Wine supports applications as far back as Windows 95 with more than 2 million lines of written code.

“Our company’s mission is to really break down these barriers and limitations by making these devices — whether it’s a Linux laptop or a Chromebook or a MacBook — do more,” James said.

Future Plans that Stretch Beyond the Chromebook

Whether he is taking his Chromebook around the globe on business trips, or working with his CodeWeavers team to uncover new ways to expand Chrome OS capabilities, James is committed to making CrossOver on Chrome OS as flexible as possible to meet consumer needs. That means future capabilities on Pixelbooks, tablets, and mobile devices.

“I haven’t been stumped yet and found very few programs that simply won’t work on our platform,” he said. “I know that may change when we get into the real high-end games, because of the graphics processing. But short of that, I’ve been really impressed with how versatile the Chromebook is.”

He’s also fully converted to his Chromebook for international and domestic business trips. The experience he had in Warsaw taught him that bigger isn’t always better.

“You don’t have to have a big, expensive laptop or MacBook Pro to access the financial software you need or do the things that you enjoy doing from gaming to knitting,” he said.

More than 700,000 users run CodeWeavers’ programs, including the popular CrossOver Mac and CrossOver Linux. James said he expects the popularity of CrossOver on Chrome OS to increase as the list of programs it supports grows.

“We’re constantly working to make the product better, more stable, and more able to support Windows applications,” he said. “We listen to everything our customers say and do our best to make things happen for them in a relatively short period of time.”