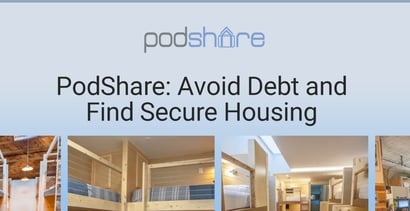 In a Nutshell: Many people are met with challenges when it comes to finding affordable housing in large cities like L.A. And these challenges are only made worse if the person is in debt or has a tarnished credit history. But PodShare throws out traditional measurements of worth when it comes to housing and bases decisions on a person’s character. The company launched nearly 10 years ago and maintains co-living spaces in Los Angeles, San Francisco, and San Diego. The PodShare model is based on affordability and community. Podestrians, as PodShare residents are called, are free to stay for as long as they want, whether it’s one day or several years, at any of the locations within the PodShare network.

Elvina Beck was just finding her way in the world when things started crashing down around her. Beck was just 21 years old in 2010 and the reverberations from the Great Recession were still being felt across the economy.

Beck — the future Founder of PodShare — was born in Russia and her immigrant parents worked to build a solid foundation for their daughter, including purchasing property for her and putting it in her name to help establish and build her credit history.

But with the economy crashing down around her and debt piling up, Beck’s L.A. home was foreclosed, her car was repossessed, and, despite her parents’ best intentions, her credit was in shambles.

“Nobody would rent to me, so I was left with the option of couch surfing, dating someone with an apartment, or finding someplace that’s very affordable who I can pay X amount of dollars to, to not look at my credit, because to them I look irresponsible,” Beck said.

Beck had accepted a lump sum of money, known as cash for keys, to voluntarily move out of her home when it was foreclosed. She said she was then able to use that cash to pay upfront for several months of rent in an apartment in the Lincoln Heights neighborhood in L.A.

Born with an entrepreneurial spirit, it wasn’t long before Beck began thinking about a business venture inspired by her recent housing challenges. She also took inspiration from her love of the 1990s MTV show ‘The Real World,’ where a diverse group of strangers live together in relatively close quarters.

Beck said she convinced her landlord to let her run with her idea. She would build a number of pods in the vacant downstairs floor of the apartment building, rent the space out, and share the profits with the landlord. That idea eventually become PodShare.

Once Beck proved that her idea could be a successful, sustainable model for affordable housing, she moved out of the apartment and officially launched PodShare at another property she acquired.

“PodShare was born in 2012 as a safe and affordable option for travel and transitional housing in the centers of expensive cities like Los Angeles and San Francisco,” according to a PodShare article on Medium.

We recently spoke with Beck about how PodShare living is more affordable than traditional housing models and helps people avoid debt, but we also discussed the many ways in which co-living can be a very rewarding experience.

From the outset, Beck did not want to follow many of the traditional rules associated with renting or owning a home, she said.

“I believe in a zero barrier of entry,” Beck said. “All you have to do is provide some form of ID and sign our terms saying that you are going to be a good roommate.”

Elvina Beck is the Founder of PodShare.

Beck said she also wanted to break away from the constraints of running background checks and basing a person’s worth on their credit score. She explained that, because of the situation she had been in herself, she wanted instead to look at the character of the person and not their financial background or how much debt they’re in.

“Clearly, I’m a nice person and something bad happened to me, and I was looked down upon,” she said.

Beck said she also thought about how people have vastly different wants and needs, and wanted to offer flexible payment options whether that means paying per day, week, or month.

PodShare locations charge one fixed rate with utilities included, come fully furnished, and include food, toiletries, and daily housekeeping. There are no minimum or maximum stay requirements, and check-out time is 10 p.m.

Beck said that, as someone who worked in the gig economy, she didn’t want people to have to check out in the mornings like many places require. She would rather let them have the opportunity to spend the day working and earning money knowing their belongings were in a safe place.

As the Founder of PodShare, Beck was her own first customer. And she has lived in pods in the PodShare community ever since.

The Benefits of Co-Living Include Security and Community

“PodShare was created to give everyone the chance and choice to shared housing in the heart of the most expensive cities. Not just because it’s affordable, but because it makes us more emphatic humans,” according to the Medium article.

Residents have privacy in the sense that they have a pod to call their own — a 50 square foot, cleverly designed sleeping space.

PodShare homes are designed with open floor plans along with 50-square-foot Pods for residents.

The idea is that to live in an expensive city like L.A. and gain access to all the opportunities and amenities it provides, some people may have to sacrifice privacy for affordability.

PodShare is also about community and sharing experiences.

“Housing is unaffordable. By sharing, costs lessen. Subconsciously, we identify with people different from ourselves in close quarters. Upon departure, we take these experiences with us,” according to the company. “Sharing breaks down walls that over time could make one a more educated voter, kinder neighbor, empathetic employer, better collaborator, and grateful citizen.”

Beck said PodShare and its affordable co-living model attracts people from all walks of life.

Many PodShare residents — aka Podestrians — are millennials who work in the gig economy and look at the world from a different perspective from that of their parents’ generation.

“Millennials don’t own a gym at home, they buy a membership. We don’t subscribe to cable television, we watch Netflix. We don’t buy CDs, we stream music,” according to PodShare. “American car sales are on the decline because we Lyft or Uber. We can rent a bicycle, get a degree online, have our meals delivered to us, and document our entire lives on social media.”

Other residents are simply looking for the peace of mind that comes with living in a secure location and having their basic needs met while they are working on getting out of debt and establishing a solid financial foundation for their future.

A Network of PodShare Communities in California Cities

Since launching the first PodShare location in 2011, Beck has expanded the PodShare network to include multiple locations across L.A. as well as locations in San Francisco and San Diego.

And as members of the PodShare community, Podestrians can enjoy living in any of these locations.

“Our membership housing offers you flexible, single rate, network-wide housing across the most expensive neighborhoods in Los Angeles,” according to the company. “As our community grows, so do your options to travel and live remote. Join our housing network, and never feel stuck in one home, with one set of roommates, under an annual lease.”

And community is an idea that is very much front and center at each PodShare home as well.

“PodShare’s layout offers maximum rate of collisions. Collision is defined as the rate at which you meet someone new,’’ according to the company. “A private home has the least number of collisions, an apartment with a few shared roommates is in the middle, and PodShare’s co-living model would have the highest rate.”

These opportunities for collisions are a great cure for loneliness. They offer networking opportunities and help people become well-rounded individuals by sharing ideas and experiences with others.

While things look a bit different these days thanks to the COVID-19 pandemic, PodShares also support the community vibe with monthly events such as gatherings around music, comedy, and people in general.

The mix of long-term and short-term residents, and Podestrians who move around from one location to another are essential components that make PodShare what it is.

“That hybrid community is super crucial to us,” Beck said. “And we don’t call ourselves a hostel because hostels don’t let you stay past three weeks. We call ourselves a co-living space because many people have stayed here for years, not days.”

Listia: Sell Unwanted Goods and Get Items for Little or No Cost

Planswell: Free Financial Plans for Everyone