Listia: An Online Marketplace Where Users Can Sell Unwanted Goods and Pick Up Useful Items for Little or No Cost 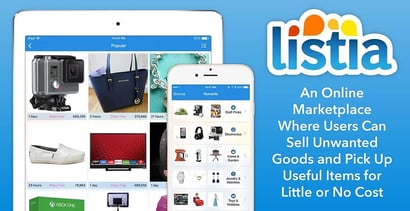 In a Nutshell: We all have items lying around the house that have outlived their usefulness to us but could hold great value for others. Consumers can sell those unwanted goods on Listia — an online marketplace — and build up Ink, which is Listia’s native cryptocurrency. They can also purchase goods from other members with Ink, credit or debit, or trade Ink on an exchange. Listia is a great place to buy and sell old video games, movies, and other media, as well as clothing and collectibles. For those who traditionally enjoy donating their goods to charitable organizations like Goodwill, Listia allows users to donate their transactional credits to a number of different charities.

Let’s face it — if you haven’t worn those clothes that are stacked in the top of your closet or are stuffed away in the storage container under your bed in more than a year, you’re probably not going to. Similarly, if you haven’t had a hankering to save a princess in many a fortnight, you could likely get rid of that dusty video game console and never give it another thought.

We all have those types of items lying around our house. They are in perfectly fine condition, but they have outlived their usefulness for us. Yet, they remain in our possession when someone else might gain years of use from them.

With Listia, users can easily gain value from their unused goods through its easy-to-use marketplace. And, the platform is great for consumers on a budget because the website is packed with a wide variety of items that can be had for next to nothing, or in some cases, nothing.

“The idea for Listia was born in 2009 after my Co-Founder James Fong tried to give away a pair of snowboard boots on Craigslist,” said Listia Co-Founder and CEO Gee-Hwan Chuang. “He found the process frustrating. After he listed the boots he immediately got like, 50 emails. Then the guy he chose to give them to never showed up.”

That’s when Chuang said he and Fong set about to create a platform where users can conveniently give away the things they don’t need. And they launched Listia in late 2009.

Buy, Sell, or Trade While Earning Cryptocurrency and Building Your Listia Reputation

The concept behind Listia quickly evolved from one that offered just a place where you could give away your unwanted items to include the idea that the more you give away, the more you should be able to get in return, Chuang said.

Chuang and Fong introduced Listia credits, which users build up by giving away items, and can apply toward items other users have listed on the site. Users can also gain credits by completing offers from partners, participating in promotions, and other activities on the Listia website.

Today, the credit concept has evolved even further with the introduction in 2018 of Listia’s own cryptocurrency, known as Ink. Ink works much like the Listia credits system, except that with Ink, users have a way to take their Listia gains outside the marketplace by trading them for other cryptocurrencies, which can then be traded for cash.

Listia facilitates users to be able to buy, sell, and trade unused items.

“When you sign up for Listia, you get some free Ink right away, so you can start browsing right away to see if there’s anything you’d like to buy,” Chuang said. “And, there’s a list of five or 10 activities you can do to earn more Ink, including listing your first item, watching a video, and inviting friends to Listia.”

Chuang said it’s not necessary to become a seller on Listia to participate. A portion of users gain Ink exclusively by participating in the various offers, deals, and surveys on the site. He said users also have the option to purchase items using a credit or debit card if they do not have enough Ink.

For consumers on a budget, Listia can be an economical way to essentially trade out items you don’t need for items you do. If you’re participating as a Listia seller and buyer, you can score quality items without having to invest any of your own funds — just give away or sell items you already have and don’t need.

“We have a few broad categories that tend to be the most popular among users,” Chuang said. “One big thing is media — DVDs, video games, Playstations, Xbox consoles. All that sort of stuff is great because even though you’re done with them, they still have their full value in that they can do all the things they did when they were new.”

Chuang said he’s unlocked a lot of value from his own collection of movies and old video games. He recommends new Listia users start by clearing out their old DVD and video game drawers.

“We also have a lot of young parents whose kids are at the ages where they’re outgrowing clothes quickly,” he said. “They’re able to take that onesie that might have been worn once or twice and list it, then trade up and get the next set of clothing.”

Other popular categories include electronics, including cell phones, cameras, and other commonly used items.

“Another big one is collectibles,” Chuang said. “We see a lot of baseball cards, Pokemon cards, Magic: The Gathering cards, stamps, and coins.”

Chuang added that, like eBay, Listia users have a star rating. And, their past transactions are publicly viewable as well. He said this helps to let users know who the most trustworthy and effective buyers and sellers are.

These features, along with an open commenting system led to the creation of a Listia community in which users regularly chat with each other about items, and in some cases, Listia friendships carry over into the real world.

“We’ve had users who met on Listia, as buyers and sellers, who started dating and eventually got married,” Chuang said. “That was a completely unexpected effect of Listia, but there is this really strong community element about it that we love.”

He said another recent user story that stood out to him was a father who wrote in saying that he and his son had strengthened their relationship by collecting various cards together and selling them on Listia.

“It came at a time in their lives when the dad was just really happy that they found something that they could do together and really enjoy their time,” Chuang said. “That was a really nice story.”

The act of donating hits many people right in the pleasure centers of their brains. It feels good to do good. That’s why many consumers look to Goodwill and similar charitable organizations or thrift stores to pass along their unwanted items, including clothes, electronics, games, and other common goods.

So, not only does donating your items to charity help those in need, it gives you a healthy mental boost as well. And, according to Go Green Drop, donating clothes is good for the environment because it keeps the items out of landfills.

Chuang said that, over the years, Listia has employed various tactics to enable users to contribute to charities while using the marketplace.

“Over the years, we have tried a few different ways to allow users to contribute to charities,” Chuang said. “When we first started, if users wanted to list their item and have proceeds go directly to a charity, they could do that. But that process proved to be fairly complicated.”

He said Listia’s most recent iteration simplifies the process.

“We can basically take your credits and we’ll convert it to a dollar amount and give it to charity,” Chuang said. “We know a lot of people feel good about giving their items to Goodwill or another charity, so we wanted to enable that process in an online way as well.”

Past charities that Listia users have donated to include the Red Cross’s Hurricane Harvey Relief, the League for Animal Welfare, Disabled American Veterans, and Children’s Aid.

Chuang said that Listia is currently focusing efforts on Ink Protocol — an extension of Listia. He said now that the company has built up a solid, safe, and secure marketplace with thousands of transactions occurring, it wants to help Listia users build their reputations across other marketplaces.

“If you’ve been selling on Listia and you have 100 positive feedbacks, we want to enable you to use that feedback the next time you sell on Craigslist, Etsy, or eBay,” he said. “We want you to be able to say, ‘Hey, look at my Listia reputation — you can trust me.’”

Chuang said Listia hopes to significantly expand Ink Protocol in the next couple of years.

“We’re trying to build a global reputation system with a marketplace layer,” he said. “We want to give some power back to the sellers so they can have freedom of choice and also attract new buyers.”