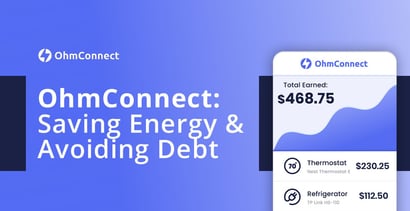 In a Nutshell: As people look for ways to save money and avoid debt, OhmConnect offers one solution for residents of California. OhmConnect works with utility companies to learn when the energy grid will be particularly stressed. OhmConnect then asks its users to lower their energy consumption during a specified time. The reduction in energy consumption reduces stress on the grid and helps utility companies avoid using costly and inefficient peaker plants to supplement demand. OhmConnect users are then recognized for their role by earning points that can be used to purchase rewards or they can be entered into a bi-weekly prize drawing.

The past year has been a particularly challenging time financially for many U.S. residents. As the COVID-19 pandemic surged across the country, the financial livelihoods of millions of people were impacted and their debt began — or continued — to accrue.

People have been looking for ways to avoid further debt by cutting corners where they can, canceling online subscriptions and adjusting dining budgets.

Another area where residents of California can potentially uncover savings and avoid debt is on their power bills. Of course, anybody anywhere can theoretically reduce their power bill by simply using less energy.

But OhmConnect is a company that helps people save energy and money through strategically timed reductions in energy consumption. The company was founded in 2014 by Cadir Lee, Matt Duesterberg and Curtis Tongue.

We recently spoke with Tongue to learn more about OhmConnect and how the company helps consumers use less energy, save money, and potentially avoid debt.

“We wanted to figure out a way to reward people for making smarter energy decisions; to help me make smarter climate decisions,” Co-Founder and Chief Strategy Officer Tongue said. “What we were able to cobble together in those early days was a program that paid users to reduce their energy once or twice a week.”

Over the years, the OhmConnect model has grown more robust and sophisticated, which allows more consumers than ever in the company’s service area to reduce their energy consumption, lower their power bills, and be rewarded.

Reducing Stress on the Energy Grid

From the comfort of home, it can be easy to forget exactly how much work is involved behind the scenes for a light to come on when we flip a switch or for the water temperature to be just right for a shower any time of the day.

Power companies run vast plants that generate electricity, but of course the amount of energy that can be generated by one particular plant or a group of plants is finite. When the energy grid is pushed near its maximum capacity, power plants turn to backup sources to keep energy flowing for consumers at home.

Curtis Tongue and Matt Duesterberg are two of the Co-Founders of OhmConnect.

“There’s a market to ensure that if the grid is stressed — on a particularly hot day, perhaps — there are enough power plants around to be able to keep the lights on and meet that demand,” Tongue explained.

This sounds like an obvious and simple solution, but Tongue said the backup plants — known as peaker plants — that companies turn to are often not in what one would consider prime operating conditions.

“In many cases, those peaker plants are old, outdated, and don’t make a ton of economic sense to run except for in these instances when demand is through the roof,” he said.

These plants are able to command premium rates when the grid is in an emergency situation, Tongue said. But they are terrible for the environment.

“They produce two or three times the carbon footprint of other plants,” he said. “That’s where we come in. We have a more economical and cleaner resource for the grid to be able to dispatch.”

OhmConnect not only helps users reduce their energy consumption, but it also rewards them for doing so.

It all centers around what OhmConnect refers to as the Ohm Hour.

“It’s a brief window of time (usually on weeknight evenings) when demand on the energy grid is so high that utility companies would rather pay their customers to reduce their collective usage than the alternative — firing up a dirty, expensive peaker plant,” according to the company website.

OhmConnect works by partnering with utility companies in its service areas. The companies let OhmConnect know when a time of intense demand is approaching, and OhmConnect notifies its users via email or text message.

Users then signal whether they will be able to participate in the energy reduction event.

“OhmConnect community members reduce our energy usage by giving our thermostats a break, procrastinate on running the dishwasher or washing machines, and not using electronics,” according to the website. “Get rewarded: If you’ve used less energy than you were forecasted to, you get rewarded with cash payments or an entry into a bi-weekly prize draw.”

This is possible because OhmConnect basically trades energy in the utilities market similar to how a power plant would.

“We bid a quantity of energy at a specific price, and if the market accepts our bid, we need to deliver that energy,” according to the company. “The trick is that we don’t actually create any new energy — we simply reduce as a community, which has the same effect as contributing energy to the grid.”

With this system in place, utility companies can avoid using the pricier, environmentally damaging peaker plants, and OhmConnect users get rewarded via points or prizes.

And, in addition to helping the environment, the rewards are the best part for users.

“You’re actually able to use the rewards points that you’ve earned and put them toward things like smart plugs or Nest thermostats in the OhmConnect store, which is really nice for families looking to save more,” Tongue said.

Users can also redeem other items, including gift cards, in the store.

“Instead of earning points for using less energy, Prize #OhmHours give you a chance to win a prize,” according to the website. “You’ll get an energy-saving goal for each Prize #OhmHour, and if you beat it, you’ll be entered to win the next prize drawings (which happens every two weeks).”

Clearly, using less energy will reduce power bills and help avoid debt, but in today’s world, it’s not always easy to simply turn everything off. Tongue offered some guidance to help people reduce their energy consumption.

“The best thing you can do to maximize your Ohm Hour is to automate the home using smart plug or smart thermostats,” he said. “We noticed that people who automate tend to save about twice as much as non-automated users, so we try to make that as easy and cheap as possible for people to do.”

Not only does this accelerate those users’ earning, but it also simplifies things.

And speaking of earning, Tongue said consistent users can earn $200 to $300 per year through OhmConnect. Of course, the automated users stand to earn more. While it’s not typical, Tongue said he has seen some users earn into the thousands of dollars.

Another energy-saving tip for those who may not be able to automate their whole house is to consider automating appliances like refrigerators and freezers.

“Those are particularly helpful appliances to automate because a lot of times they are old and inefficient so they’re running all the time. And they use a lot of energy,” Tongue said. “But if they’re off for an hour or so, it doesn’t really affect anything inside because the thermal mass of a refrigerator or freezer is huge.”

“This is available for our automated users,” he said. “We monitor the real-time energy market and as soon as we see in real time there’s a spike in demand or increase in energy prices, we’ll automatically adjust their appliances on the fly.”

LegalShield: Save Time and Money with a Legal Subscription