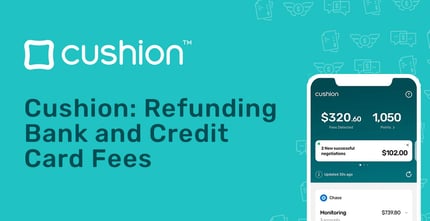 In a Nutshell: Consumers often accept the occasional overdraft fee or late credit card payment fee as an unavoidable expense. What they don’t realize is that they are valuable customers to financial institutions, and with the right tools at their disposal, they can say goodbye to those fees. Cushion is a platform that leverages AI and machine learning to scan customer finances and determine when and how to negotiate fees on behalf of the customer. The company has helped users get more than $3 million in refunds since launching in 2018. Cushion offers three tiers of service, ranging from $36 per year to $96 per year, the latter of which comes with unlimited scanning and unlimited negotiations.

Bank and credit card fees seem nearly unavoidable, and they’re often incurred by accident — a forgotten due date results in a late fee or an automatic payment is deducted leaving your bank account temporarily in the red.

Those kinds of small mistakes add up to big money for finance companies. In 2019, U.S. banks took in more than $11 billion in overdraft fees alone.

Many consumers may not even be aware of how much they are paying in fees or realize that many of the fees are refundable. Cushion is not only bringing this issue to light, it’s taking on the dirty work of negotiating on behalf of the customer.

Kesserwani spoke with us about how the company’s innovative tech helps people save money and live financially healthier lives.

How Cushion Leverages AI to Save Users Money

Kesserwani gave us a rundown of the types of fees people are being hit with.

Monthly minimums and monthly service charges are also crushing people, Kesserwani said, because they are getting billed simply for not maintaining a minimum balance.

“That’s another massive category,” he explained. “And ATM fees are huge, whether it’s from making withdrawals outside the network or whatnot. Credit card late fees is another very big one that we do. There are dozens and dozens of fees, I could go on and on.”

Paul Kesserwani is the Founder and CEO of fintech app Cushion.

Since launching in 2018, Cushion has helped facilitate more than $3 million in refunds to customers by negotiating fees with banks, credit card companies, and credit unions

Today, Cushion’s platform is powered by artificial intelligence and machine learning technology. But that wasn’t always the case.

“In the early days, we wrote some algorithms, and we had humans doing a lot of the work,” he said. “We then hit a threshold of, I think, 60,000 or 70,000 negotiations, and we’re like ‘Ok, now we have enough data to build up several machine learning models.”

What that means is that Cushion has algorithms working automatically for customers to determine which fees to negotiate. And once the determination is made, the algorithms continue to do their work by writing, sending, and reading emails.

Kesserwani said humans step in when there are problems interpreting emails or if the models run into any other kinds of problems. But, for the most part, the machine learning models get the job done in an efficient and impactful way.

So, Cushion negotiates fees on behalf of financial institution customers. But, why do these institutions so often refund the fees?

“Whether it’s bank fees or credit card interest, there are 15,000 financial institutions in the U.S. competing for the business of a finite number of people,” Kesserwani said. “And their cost to acquire a customer is very high. So they’d much rather give you back $200 than spend $700 to replace a customer that’s just like you.”

“The goal was never to start a company that fights with banks, that’s not how you build a million-dollar successful business,” Kesserwani said.

Kesserwani’s journey to launch Cushion goes back to his time working at numerous Silicon Valley companies, including Twitter, for a decade. While taking some time off, Kesserwani said, his parents were traveling abroad in their native Lebanon.

One of their bank accounts was accruing and compounding fees daily but they couldn’t reach the bank to resolve it, so they asked Kesserwani to close the account for them while they were away.

“I ended up fighting with the bank pretty heavily about the situation, and I also realized I had a bunch of fees from my Twitter days because I was traveling nonstop as a project manager,” he said. “I remember thinking the fees were painful, but I was making enough money that it wasn’t the end of the world.”

But Kesserwani began to think about how somebody who is struggling financially could ever stay on top of a similar situation.

“I tried every single fintech app out there and realized no one was tackling bank fees head-on,” he said.

So when Kesserwani set out to create his own platform to help solve the fee problem, he did it with the financial wellness of the average consumer in mind.

Cushion was created out of necessity — to safeguard people’s money, according to the company. Cushion believes that people deserve peach of mind and should be empowered when it comes to money.

Cushion offers three plans for customers to choose from, and signing up only takes a couple of minutes.

“With the basic offering, we do one negotiation per month, and we scan for fees once a week,” Kesserwani said.

This entry-level package costs $36 per year.

“To be very honest with you, I thought everybody was going to sign up for that package, but practically nobody signs up for that tier because they have so many fees,” Kesserwani said. “They’re like, ‘One negotiation a month is not going to cut it for me.’ They’re accruing fees almost weekly if not daily.”

That’s why most customers choose the middle tier or the top tier package.

The middle tier, which is called the People’s Choice, costs $48 per year. This package includes daily fee scanning, up to three negotiations per month, and negotiation updates.

Finally, the highest tier — The Works — is $96 per year. This comes with daily fee scanning, unlimited negotiations, negotiation updates, and priority support.

“So, what’s really varying there is the volume of negotiations we’ll do per month, and how often we’ll scan your account for fees,” Kesserwani said. “For example, the unlimited tier, we do unlimited negotiations through the year, and those do cost us money. So, we said, if you pay us more, we’re just going to go all out for you.”

Kesserwani said that, while consumers have the ability to negotiate these fees on their own, Cushion tends to have a higher success rate when it comes to getting fees refunded. This is because the Cushion system looks for leverage points that the average person may not consider.

These kinds of negotiations result in getting refunds, Kesserwani said.

Cushion is continually working to improve its service, the CEO said, and will be rolling out new features in the future. In the meantime, he left us with some advice based on his experience at Cushion, illuminating the value of the product.

“Most people think they’re on top of their finances, and that’s fair to assume,” Kesserwani said. “Unfortunately, almost everybody who signs up for Cushion, including our own employees, are surprised because they think, ‘Oh, I don’t have any fees or maybe just a $10 fee,’ and then they’ll start to see triple-digit amounts of bank fees.”