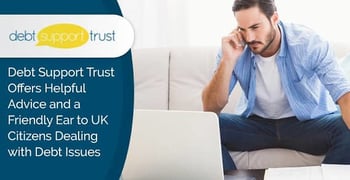 In a Nutshell: An increasing number of Brits struggle with debt issues every day across the UK. As the cost of living rises faster than wage increases, more consumers find themselves dealing with bills they can’t afford. Since 2010, Debt Support Trust has provided citizens across the UK with expert advice on ways to manage debt from £100 to several thousand pounds. The not-for-profit debt advice charity served more than 1,500 clients in 2016 and has helped them eliminate more than £1.4 million in unsecured debt since its inception. The organization takes a holistic, tailored approach to each client and prides itself on providing a friendly voice to clients in need.

No one enters adulthood with a plan to accrue debt. In most cases, personal financial issues — from loss of employment to medical emergencies — happen unexpectedly with little time to react to the changes. Other times, personal financial problems develop over time without you realizing it.

Debt isn’t a new phenomenon in the UK, but it is growing. Higher food and energy bills, housing costs, as well as the four-year government freeze on tax credits and working age benefits, have more than 14 million Brits living in poverty. The UK government classifies poverty as anyone making less than 60% of the country’s average income of £23,200 ($31,071 USD). The number of people in that category is higher than it’s been in 20 years.

The number of UK citizens struggling with debt has increased since 2010. The average household debt-to-income ratio is expected to rise to 152% by 2021, inching closer to the 160% recorded during the boom years before the 2008 financial crash.

The graph shows the projected increase of the UK household debt-to-income ratio through 2021.

Most of the increase is attributed to a slow 0.7% wage growth that can’t keep pace with rising interest rates and the cost of living. As prices for everyday goods and services increase, more Brits lean on credit cards to survive. Interest charges can make those debts hard to eliminate over time.

Debt Support Trust is a not-for-profit debt advice charity which helps its clients face these challenges every day. More than 1,500 residents of England, Wales, Scotland, and Northern Ireland turned to the charity in 2016 for guidance on debt issues both big and small.

“We provide debt and money advice that covers everything from somebody who may have £100 ($133.88 USD) in debt on a small credit or personal loan, all the way up to thousands upon thousands of pounds that they don’t know how to manage,” said Stuart Carmichael, Chief Executive of Debt Support Trust.

The charity’s expert advisors are trained in various repayment plans open to citizens in different parts of the UK. Stuart said the goal is to provide each client with a personally tailored experience that ends with a plan to get out of debt.

“We cover the whole spectrum,” he said. “We give transparent and holistic advice that can help any individual in debt. We present them with all of their options — positive and negative — and help them choose which is best. Then we help them accomplish whatever their goals are.”

Stuart said the nonprofit’s mission, in addition to financial advice, is to provide a sympathetic ear and a friendly voice to clients experiencing the troubles that life sometimes hands out.

“We’re doing something for people who are at a time in their life that they never expected they’d be in,” he said. “We’re problem solvers. We give them the information they may not know is available to them. We do everything we can to help them sleep again.”

Anyone who reaches out to Debt Support Trust online or over the phone is connected to one of the charity’s advisors. Together they examine the person’s overall financial situation — debt, income, and other obligations — to create a debt management plan and set a date by which the client can be free of debt.

“If they can’t get a date on the calendar when they’ll be debt-free again, it makes it very difficult for people to keep up their repayment plans,” Stuart said.

“Online messages are like a halfway house for people who are embarrassed or frightened to admit the debts they have,” he said. “Many people don’t tell their friends and family about their debts. The online application allows them to take a small step toward seeking help. We guide them from there.”

Thousands of clients have followed the advice Debt Support Trust gives, leading to plenty of positive responses from people who are now free of their debt burden.

While thank-you gifts are always nice to receive, the nonprofit gauges its success on the number of clients who don’t come back.

“Our jobs can be weird,” Stuart said. “If you’re doing your job right, then you’ll probably never speak to that person ever again. We don’t want repeat customers.”

A Holistic Approach to Restarting Your Financial Life

UK citizens struggling with debt have many options for how to approach their situation. Numerous advice charities and management companies specialize in assessing financial health across the country. Debt Support Trust aims to set itself apart from the others with a welcoming atmosphere for each client.

“We like to pride ourselves on our holistic approach,” Stuart said. “We take a lot of time to walk people through their problems with a friendly voice.”

He said that approach resonates with clients who appreciate the chance to discuss sensitive topics with someone who is willing to listen.

“Sometimes we talk to people and they phone us back later to talk about something that’s not relevant to debt, but relevant to their lives,” he said. “That’s how we differentiate ourselves. We’re friendly and supportive.”

Debt Support Trust’s clients come from varying backgrounds. The charity has experience dealing with many forms of debt and understands that sometimes there are underlying issues clients need to address before they can tackle their debt.

Stuart recalled the case of a former client with a gambling problem. The man had ready access to credit and new money and continued to increase his gambling debt making a bad financial situation worse.

The nonprofit approached his addiction issues by suggesting he block gambling websites and cut off access to certain credit lines. In time, they created a debt management plan together that slowly helped pull the client out of the problem.

“If there’s an underlying problem like gambling that’s not being treated, then ultimately even the best repayment plan in the world won’t keep that debt from growing,” Stuart said. “We sometimes have to approach the hidden problem before we can attack the obvious one.”

Take the First Step to Freedom from Debt

If you’re dealing with debt, you’re not alone. A record number of UK citizens struggle every day with bills that cannot realistically be paid. Debt of any size must be approached in a way that eliminates the root cause of the problem and finds ways to avoid debt in the future.

Debt Support Trust has thousands of success stories from clients who felt they were stuck in a never-ending financial spiral. With expert advice from the charity’s counselors, that spiral for many has come to a stop and life has returned to normal.

The agency’s holistic approach to debt management offers a friendly voice and ear to consumers who are just coming to grips with their problem and may be hesitant to talk about it. Stuart said the biggest hurdle most clients have is taking the first step. Once that happens, the process is often smoother than they had expected.

“A lot of people just say they’ll deal with it tomorrow and stick their head in the sand,” he said. “For the majority of people who never want to be in this situation, they just want to get it solved and get their lives back to normal. We try to help them get that done as quickly as possible.”