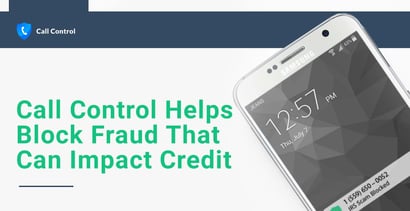 In a Nutshell: Nearly 1 in 3 Americans were victims of phone scams in 2020. That type of fraud costs victims money and can quickly hurt their credit scores by raising card balances and credit utilization rates without their knowledge. Call Control helps consumers avoid those scams by blocking calls from unknown or unwanted phone numbers. The app is the most established third-party call-blocking solution on the market and offers tools for landlines and mobile devices. Call control also stays updated on the latest trends so its users can stay a step ahead of fraud.

A recent report from Truecaller found that phone scams are alive and well in the United States. In 2020, one-third of Americans fell prey to phone scams, and almost one-fifth of those people were swindled more than once.

That fraud also cost victims $29.8 billion, and respondents reported an average loss of more than $500 — more than in any other year on record.

Many consumers understand they can lose money to phone scams, but they may not recognize the long-term havoc that fraud can wreak on their credit scores. For example, if someone can give out a credit card number over the phone, a fraudster can use that number to make purchases online or even create a fake card.

Over time, the victim’s higher card balances and increasing credit utilization affects their credit score. If someone steals a card number that legitimate cardholders rarely use, they may even miss payments on a balance they didn’t know existed. Those late or non-payments can significantly influence a person’s credit score.

That’s why Call Control aims to block calls before they come in, providing consumers with protection and peace of mind. The app also reports spam phone calls to keep others from falling victim.

Call Control is the most established app on the market, and its functionality doesn’t stop with blocking calls. The platform also educates consumers and businesses and stays ahead of fraud trends to further protect its users.

“We’ve been in business the longest, and we have a complete solution. We’re a one-stop shop for consumers and businesses, and we build education in every chance we get,” said John Adler, CEO of Call Control.

Adler shared a phone scam attempted on his elderly mother. She received a call from an unknown number, and when she answered, the caller told her that her nephew was in the county jail after a car accident. The fraudster said her nephew’s attorney needed $5,000 to bail him out.

She didn’t fall for the scam for a simple reason — she doesn’t own a car or an ATM card. The scammer quickly hung up.

“We get more of our share of scam stories like that. This is what gets us up to work every day. What do you do to protect your 93-year-old mother?” Adler said.

In fact, Adler said he was inspired to help create Call Control after his father lost $300 to an IRS phone scam years ago. He came to understand that phone companies were doing very little to prevent fraud, and third-party companies needed to take action.

With that objective in mind, Adler decided to crowdsource identification of the malicious actors behind phone scams. Essentially, he realized that, if one caller could report a scam call, a company could block that number from calling others — or provide information about the caller’s intent.

So Adler and Founder Ben Sharpe developed the first call-blocking app on Blackberry and Android. Over the years, the company has added blocking capabilities for Android and iOS and a cloud-based service for enterprise phone systems.

They also have a Bluetooth landline device and are beta-testing a new Wi-Fi based landline call blocker.

“Landlines are tougher because it’s hardware vs. software. For landlines, you have to have an app and hardware. We carefully released the Bluetooth product, and now we’re onto Wi-Fi for the older phone networks in the U.S.,” Adler told us.

Users typically block two types of calls with Call Control. The first type are calls from legitimate sources. For instance, if someone signs a contract to get satellite radio in their new car, they may not realize they are signing up to allow that company to call them.

Companies and nonprofits comply with the Telephone Consumer Protection Act (TCPA), which means they are legitimate organizations with an authentic offer for customers.

The other types of unwanted calls are from fraudsters. These callers are not concerned with the TCPA or the Do Not Call List because they know how difficult it would be for anyone in the American government to track them down.

“You can imagine how difficult it is to capture the data, go through the legal system, and then get to the three people overseas that need to be arrested,” said Adler.

Call Control works by identifying calls from numbers that are not in the user’s contacts list. The app then offers information about the number before asking the user to allow or block the caller.

If a user blocks the call, Call Control uses that information to help other users decide whether they want to block the same number.

“Those are votes for us. That’s how we identify who the bad actors are. There is a lot of software around that,” said Adler.

Phone companies haven’t done enough to prevent phone scams, and neither has the National Do Not Call Registry.

Aside from those avenues, there are few programs in place that prevent this type of scam. The phone industry, in particular, has shown little appetite to intervene.

“Because of inaction by industry, consumers have trained themselves not to answer the phone. When I tell people we stop robocalls, it always starts a big conversation,” Adler said.

Call Control also aims to inform users about trending and up-and-coming phone scams. In addition, the company posts educational content about phone scams on its website so all consumers can benefit from its knowledge.

Many consumers have simply stopped picking up their phones, but Adler and the Call Control team said they want everyone to feel comfortable answering their calls.

Some Call Control customers are so passionate about preventing scams they go above and beyond in sharing information. For instance, users can send tickets to EveryCaller.com that describe the scammer who tried to dupe them.

Despite all its innovations, Call Control has to remain vigilant to keep up with the latest phone scams.

“You probably remember the great Twitter Bitcoin hack. That hack started with a phone call, and they used social engineering. Another one is people are calling hotels and saying, ‘This is the front desk, your credit card didn’t go through, can you give it to me?’” Adler said.

The first step to preventing phone fraud is blocking unknown numbers. Still, if someone picks up a call from a potential scammer, Adler offers this piece of advice:

“Ask them to give you a number to call them back. Say, ‘I need to call you back after I verify through a third party,’” Adler said.