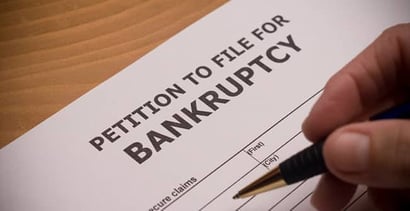 Bankruptcy is a measure of last resort for the overindebted consumer, presumably offering a fresh financial start to people drowning in debt.

But for low-income citizens, those who’re most likely to file for bankruptcy, is the law really on their side?

If you had asked that of University of Denver Sturm College of Law Associate Professor Michael D. Sousa before 2005, he might’ve said yes.

But in his latest paper “Legitimizing Bankruptcy Petition Preparers: A Socio-Legal Prescription for Change,” he argues the Bankruptcy Abuse Prevention and Consumer Protection Act (BAPCPA) “has greatly affected debtors by reducing access to the bankruptcy law system.”

I spoke with Sousa to find out what’s ailing our bankruptcy system and his ideas to change it.

How did BAPCPA change bankruptcy for consumers?

Upon signing the BAPCPA, President Bush said, “The act of Congress I sign today will protect those who legitimately need help, stop those who try to commit fraud and bring greater stability and fairness to our financial system.”

The BAPCPA was introduced to Congress under the pretext that consumers were abusing chapter 7 and 13 bankruptcies, using them as a way to discharge debts they would’ve otherwise been able to pay.

It introduced several new statutory provisions that debtors and their attorneys must adhere to when filing for bankruptcy.

For example, debtors must pass a “means test” to determine whether they’re eligible for Chapter 7 bankruptcy and must also take credit counseling and debtor education courses prior to filing.

“It made the process much more difficult, more cumbersome and ultimately more expensive for consumers,” Sousa said. “Because in order to comply with all of the new requirements, attorneys charge more and it’s more difficult for people to file pro se, because of the new laws and the technicalities that go along with it.”

The court fee alone to file for a chapter 7 bankruptcy is roughly $300 (although a bankruptcy court can waive the Chapter 7 filing fee if the debtor has an income less than 150 percent of the official income poverty line for a similar family size), but that doesn’t include the additional fees attorneys charge to represent you in court.

“[BAPCPA] made the process much more difficult, more cumbersome and ultimately more expensive for consumers.”

When all’s said and done, consumers pay an average of $1,500 or more to file for Chapter 7 bankruptcy.

The introduction of BAPCPA has also sparked criticisms from several legal experts and consumer advocates.

“The principal target of [BAPCPA] was the debtor,” University of Michigan Professor James White writes. “The most widely discussed goal of the creditors was to force many out of Chapter 7 and into Chapter 13. A set of less vocal creditors hoped [the BAPCPA changes] would dissuade any debtors from filing in any chapter.”

Indeed, the banking industry was one of BAPCPA’s most prolific supporters, spending more than $100 million lobbying for changes that would make it more difficult for debtors to file for bankruptcy.

Bankruptcy petition preparers are non-lawyer individuals who help debtors simply file for bankruptcy. Because they are not authorized to practice law, they’re prohibited from offering any legal advice, such as which chapter to file under, which debts/assets to list and what property might be exempt.

Sousa cites Stanford Law Professor Deborah Rhode who once said, “[t]o require that lay practitioners sit sphinx-like in the face of even rudimentary inquiries, and type up forms which they know to incorporate errors or omissions, is a rather perverse means of ‘protecting the public.'”

Petition preparers don’t have a sterling record themselves, either. In the early 1990s, the Central District of California discovered “petition mills” that were filing solely to delay their clients’ evictions.

“These petition preparers allegedly promised customers protection from eviction proceedings or, at a minimum, affording them several additional months to save money in order to eventually relocate by filing “face sheet” bankruptcy petitions merely to invoke the automatic stay of § 362 of the Bankruptcy Code,” Sousa writes.

Today many debtors turn to petition preparers as a means of finding the most economical way to declare bankruptcy, hoping to avoid the burden of high attorney fees.

“[T]o require that lay practitioners sit sphinx-like in the face of even rudimentary inquiries, and type up forms which they know to incorporate errors or omissions, is a rather perverse means of ‘protecting the public.'”

But Sousa said not all petition preparers are bad (and, to be fair, not all are good), but they may provide an economical solution to low-income Americans who can’t afford to hire attorneys to help them file for bankruptcy.

“We can attempt to put in place a program whereby qualified and regulated bankruptcy petition preparers can offer limited legal services to debtors in routine Chapter 7 cases where legal representation would be otherwise unavailable,” he writes. “A moderate level of legal counsel … would be a much better alternative than having individuals navigate this arcane process without any representation at all.”

To ensure quality in the process, Sousa also said petition preparers should be required to i) have a certain educational background or years of paralegal experience, ii) complete and pass a competency exam, iii) procure malpractice insurance and iv) complete continuing education requirements in order to obtain their license.

He also suggested having them supervised by the trustee system to a certain degree, whereby an overabundance of consumer complaints would result in revocation of their license to practice.

What needs to be done?

Proposing solutions to an unbalanced consumer bankruptcy system is one thing, but getting lawmakers to agree to them is another story.

Sousa said practicing attorneys would likely be opposed to the idea of allowing petition preparers to offer limited legal advice to debtors.

“Attorneys would never want this to happen because they want a monopoly on representing consumer debtors,” he said. “They don’t want the competition … The law is a competitive business, particularly for individual services.”

Trustees may be opposed to the idea as well since, according to Sousa, there’s the underlying stigma that giving petition preparers more liberties could clog up the legal system and make bankruptcy more difficult from a bureaucratic perspective.

The final hurdle would be passing legislation through Congress which, given the divisive culture on Capitol Hill, would be a herculean task in and of itself.

In the meantime, consumers who’re considering filing for bankrtupcy should be wary of going to petition preparers for advice. Although they may be a solution for change in the future, bankruptcy law renders them little more than secretaries-for-hire today.