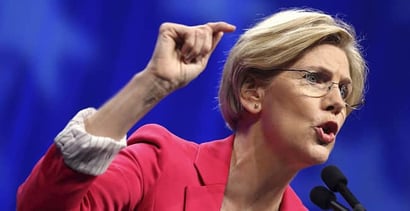 A student loan bill that would’ve allowed borrowers to refinance their loans in return for higher taxes on the wealthy failed a Senate vote Wednesday 56 to 38.

“Today is a really good day for billionaires,” Warren said after the vote, according to CBS News. “For the 40 million people dealing with student loan debt, it wasn’t such a good day. This raises the fundamental question, who does Washington work for? Does it work for those who can hire armies of lobbyists to make sure that every single loophole in the tax code is protected for them? Or does it work for young people who are trying to get started in life?”

Only three Republicans voted in favor of the bill: Bob Corker (R-TN), Susan Collins (R-ME) and Lisa Murkowski (R-AK). The bill needed 60 votes to move on to the next phase.

“Students can understand that this bill won’t make college more affordable,” Senate Republican leader Mitch McConnell (R-KY) told Reuters. “They understand it won’t reduce the amount of money they have to borrow. And students know it won’t do a thing to fix the economy that’s depriving so many young Americans of jobs.”

President Obama, who signed an executive order Monday easing payments under the Depart of Education’s “pay as you earn” program, spoke about the failed vote during a high school graduation ceremony in Massachusetts.

“When a bill to help you pay off your college doesn’t pass, it’s a disservice not only to your generation but to our history as a nation that strives to put quality education within the reach of every American,” he said, according to Reuters. “So we’re going to have to keep on putting pressure on Congress.”

Reuters and CBS News contributed to this story.