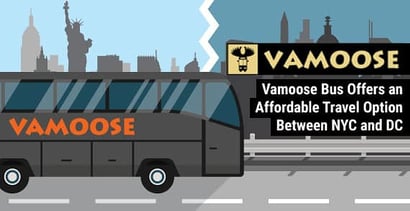 In a Nutshell: Getting around in cities with well-designed public transportation systems is both cheaper and more convenient than owning a car. New York City and Washington, DC, are two examples of cities where public transit is a practical option. Many commuters traveling between these popular destinations have discovered a convenient option in Vamoose Bus. This lower-cost alternative to flying or taking a train is a pleasant way to travel between NYC and the DC Metro area. And the Gold Bus option from Vamoose Bus provides a more upscale ride with wide leather seats, free wifi, and mobile device access to current movies.

Visitors to the United States — especially those from Asia or Europe — will immediately notice that the public transit system in our country is sorely lacking, especially outside of major metropolitan areas.

Of course, most tourists are far too polite to point this out, but the comparison to the well-designed systems of transportation in their own countries makes these observations perfectly clear. In fact, with relatively few exceptions, public transit in the US is treated more like a social program for people without cars than as a viable mode of transportation for everyone.

Many argue that the reason mass transit in the US lags that of so many other nations is the way our cities are designed, with sprawling suburbs located many miles from urban centers. Others will note Americans’ love of cars and the open road, and the desire to travel where we want and when we want. Whatever the reason, very few cities have been able to create a system of mass transit that’s both popular and practical.

The most obvious success story is New York City, with its interconnected system of buses, subways, and light rail lines. Travel around New York City, especially within the borough of Manhattan, is faster than driving — and it’s certainly cheaper and easier than finding parking. One could live anywhere within the five boroughs of New York and never need to own an automobile.

Another region that has made great advances in public transit, albeit not on the scale of New York, is the Washington, DC, metropolitan area. Collectively known as the DC Metro, the Metrorail and Metrobus systems serve more than 4 million residents of the greater DC area, as well as millions of visitors each year. Avoiding the abysmal traffic in and around Washington is the goal here.

Travel between these two major east coast metropolitan areas is one of the busiest and most popular of any two US destinations. As a result, many options are available for getting back and forth. Two of the most popular modes of transport are flying and taking the train. However, these trips can be expensive, and if you travel with any frequency, it can really add up.

A third option is to take a bus — but not just any bus. Vamoose Bus is a specialty bus service that operates between New York City and three locations in the DC Metro area, at rates far less than the airlines and Amtrak.

“We’re a family-owned business that began in 2004,” said Fred Lastres, Director of Operations at Vamoose Bus. “We started as an alternative to airline travel, which had become difficult after 9/11. We’re not a discount bus service, but we provide a good, on-time alternative to air travel, with superior customer service.”

Don’t Miss the Bus on a Cost-Effective Travel Strategy

While air travel between New York and Washington, DC, varies by airline, even the cheapest flights can exceed $200 each way. Amtrak’s regional train can be close to $100 per trip, with the Acela Express train costing even more than that. By comparison, Vamoose Bus tickets start at just $20 depending on how far in advance you book, and rarely exceed $40 even at the last minute.

But cost alone should not be the deciding factor in how you choose to travel between DC and New York. Other considerations include how long it might take to get to the airport, pass through security, check your bags, etc. Similar delays exist with train travel, although perhaps not on the same scale. With Vamoose Bus, however, there are no long lines to wait in, and no long drive to and from the airport.

The New York point of departure for Vamoose Bus is conveniently located in Midtown Manhattan, and the locations in Bethesda, Arlington, and Lorton are similarly situated within a block of the metro lines that go straight into the heart of DC.

Another cost advantage of Vamoose Bus over the airlines is with checked bags. Nearly every airline charges extra fees for bags, but Vamoose Bus is different.

“There’s no luggage fee at all,” Lastres said. “With Vamoose Bus, you can bring two suitcases per person, up to 50 pounds each, plus a carry-on. We also handle the luggage loading and unloading for our passengers at each location we serve.”

Today’s buses, or motorcoaches — as they’re more appropriately termed — are comfortable and enjoyable ways to travel. The Vamoose Bus fleet represents some of the most modern and pleasant coaches on the road, with free wifi and power outlets at every seat.

This image of Vamoose bus interiors illustrates the upgraded experience on a Vamoose Gold bus.

The premium Vamoose Gold Bus is an even more luxurious way to travel, with wider leather seats, more leg room, and a row of single seats on one side of the coach. There are also free movies available via mobile devices on the Gold Bus, for anyone who just wants to relax and unwind. This is business-class luxury travel at a still affordable rate.

The Rationale Behind Ditching Your Car in Major Metro Areas

For many people, owning a car represents freedom and independence. But it also means the expense of maintenance, the hassle of parking, and the frustration of navigating bumper-to-bumper traffic. If you happen to live in an area served by a convenient and well-functioning mass transit system, ditching your car is a valid option.

The argument used by most car owners is that they want to be able to travel with more freedom. And, while that’s perfectly understandable, it comes at a cost. With car payment, insurance, monthly parking fees, upkeep, and fuel costs, vehicle ownership is actually quite expensive — all for the convenience of being able to drive somewhere.

Now, transportation companies, like Vamoose Bus, are helping to remove one of the final arguments for car ownership in major metropolitan areas. By providing convenient, consistent, and enjoyable travel via modern motorcoach, residents of New York and DC can explore everything that both locations have to offer, without ever needing a car.

A High Level of Repeat Business Has Only One Explanation

When companies provide great experiences and excellent customer service, they’re typically rewarded by their customers. Vamoose Bus is no exception to this rule. Repeat business is a large portion of those who choose to travel with the company, and many are regular weekly commuters. There’s even a reward program set up for regular travelers.

“We have a points program, where you get a point for every dollar you spend, and for every 120 points, you get a free one-way trip,” Lastres said. “We also offer a 15% discount to college students and to anyone who works at a college or university and can show an ID card.”

That 15% discount also applies to groups of 10 or more who book together. But that’s not where the perks and customer service benefits end. The company also offers secure luggage storage at its NYC location for people who have to check out of their hotel early but who still want to explore.

In addition, travelers will be reassured to know that each location has a customer service representative present whenever buses are running, and a US-staffed call center available from 6:30 a.m. until 10:30 p.m. every day.

With such a comprehensive focus on quality and customer service, it’s no wonder Washingtonian magazine has recognized Vamoose Bus with its “Best Bus to NYC” award in recent years.

If travel between New York City and our nation’s capital is in your plans, consider Vamoose Bus as an alternative to expensive and cumbersome airlines or trains.