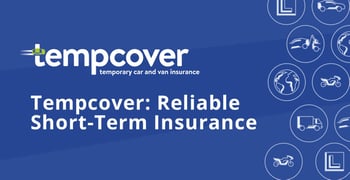 In a Nutshell: Tempcover opened the doors to the temporary automobile insurance coverage industry in the U.K. in 2006. The company offers an array of short-term insurance policies for individual drivers, commercial drivers, motorcycle drivers, expats, and many others. Tempcover’s simple strategy makes it easy for UK residents to procure automobile coverage from as little as one hour to as many as 28 days. The insurtech pioneer leverages technology to ensure a fast, convenient experience for customers. And it maintains a positive reputation with a 4.5-star Trustpilot rating out of more than 16,000 reviews.

Automobile insurance is one of those necessary things that people don’t think about until they need to use it. Or when they need it and don’t have it.

Of course, motorists are required to have insurance to own and operate a vehicle on the road in the U.S. The same goes for the UK. However, in the U.S., if you want car insurance — even if you only need coverage for a week — you have to agree to a minimum of six months of coverage.

Meanwhile, in the UK, thanks to companies like Tempcover, drivers can get temporary coverage for as little as one hour.

“Tempcover is a leading provider of short-term insurance in the UK, here to help you find flexible temporary cover quickly and easily,” according to the company. “We’ve spent over a decade developing short-term insurance products and creating an industry that has helped millions of drivers get flexible and affordable insurance.”

We recently spoke with Paul Salter, Tempcover’s Chief Product Officer, about the origin of the company (and temporary coverage industry) and how the Tempcover service works.

A Pioneer in the Temporary Insurance Industry

While temporary insurance coverage hasn’t made it across the pond to the U.S., it has been a growing industry in the UK since, well, the launch of Tempcover.

“We kind of think of ourselves as the original insurtech — we go back to 2006,” Salter said. “The genesis of this business was really the start of this niche as well. We were the first to go to market.”

In 2006, Salter was working as an insurer for another company and recalls hearing about a new company called Tempcover and its innovative service.

“I remember thinking, ‘Are you crazy? No one could do that. No one’s ever done that, it’s really quite different,’” he said. “Going forward 14 years, and we’ve got a lot of history of doing what we’re doing very successfully.”

Salter said that, to put it simply, Tempcover sprang up to facilitate the short-term usage of vehicles by people who weren’t the owner of the vehicles.

“These people don’t have any long-term interest in the vehicle, but they have some demand around using a vehicle for a fairly short period of time,” he said.

But within that core demand, the use cases for Tempcover are extremely varied.

“We’ve got a lot of commercial drivers where they’ve got a van and they’ve got a contract, and they need an additional driver on for a week because they’ve got somebody else doing a bit of work, or they got more vehicles for a particular job,” Salter said.

But the largest portion of Tempcover’s business comes from individual, private drivers. Particularly in today’s environment, people are looking for more flexibility and ways to keep their costs down. So, rather than owning a vehicle, they may simply borrow a family member’s or friend’s car as needed, Salter explained.

“It’s really a thing, for me, about giving back control to the individual,” he said. “We’re not decreeing that they’ve got to buy a huge policy because they just don’t need it. They just need whatever it is — a car for a week or for a day, and that’s it.”

Salter said Tempcover lets people know when their temporary coverage is about to run out, but there is no further commitment from individuals who purchase a temporary policy.

“They’re free to come and go. But we’re really pleased because we do have a huge amount of repeat purchases, which is absolutely vital to the model,” he said.

Salter spoke to the importance of utilizing technology in today’s fast-paced environment to keep up with consumer expectations.

“In terms of how we work, it was clear to us that we really need to be very slick. And this is kind of where we’ve evolved over the last few years, in particular,” Salter said. “Everything’s getting digitized, everything needs to be very rapid.”

Tempcover makes it fast and convenient for customers to purchase temporary insurance.

With Tempcover’s swift and straightforward quote process, it only takes about two minutes to get a policy, according to Salter.

“Our highly skilled and experienced team work hard to make it as easy as possible for you to get the right insurance. Anytime, anywhere, with Tempcover, there’s no waiting around,” according to Salter. “Our efforts have been recognized by customer, business, and insurance bodies, who have praised our customer-focused approach to insurance.”

Salter said that one reason Tempcover is able to provide quotes so quickly is due to the company’s data intake process. In the U.S., insurers can rely on a company like LexisNexis, which maintains a huge database of information. But the UK doesn’t have a similar service.

So, the choice became whether to take the time to gather about 43 different data points to produce a car insurance quote, Salter said, or go in the opposite direction.

“We went the other way and said, ‘What do we absolutely need to know to allow this person to drive?’” he said. “So, we cut our journey time down to less than two minutes and just nine questions. They’ve got the documentation by email literally a few moments later to go over and ensure that everything’s as it should be.”

Coverage for an Array of Scenarios

“Temporary insurance is the ideal insurance solution for a wide range of drivers looking for short term insurance that’s quick and easy to purchase and flexible enough to suit a number of everyday situations,” according to Salter.

The company offers short-term policies for straightforward everyday situations, such as borrowing a friend’s car for a few hours or days. But Tempcover also provides policies for less common scenarios, including its temporary learner’s insurance.

“Get extra practice without the worry,” according to Salter. “Learner insurance from Tempcover provides fully comp cover and protects the owner’s NCD for as long as you need it.”

“Returning expats can get flexible and affordable cover to use a car while in the UK with short term expats insurance,” according to Salter.

Additionally, short-term motorcycle insurance is available for people who only ride occasionally.

“Whether you need an hourly policy in an emergency, one-day car insurance or a longer, one-month policy, you get fully comprehensive cover as standard for complete peace of mind,” according to Salter.

Tempcover garners positive reviews from customers and maintains a 4.5 out of 5-star rating on Trustpilot, with more than 16,000 reviews.

“We encourage customers to give feedback on how they felt about their journey, and we take strong reference from those sorts of points,” Salter said.

With its positive reputation and position as an innovator in the insurtech space, Tempcover makes a good case for UK residents looking for fast, easy, and convenient temporary automobile insurance.