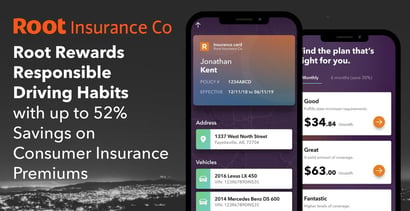 In a Nutshell: Even the best drivers often find themselves paying for accidents caused by some of the worst drivers on the road — but the Root Insurance Company is on a mission to change that. Root bases its rates primarily on current driving practices to save policyholders 52% or more on their insurance premiums. Drivers simply take the Root mobile app along on an extended test drive to see if they qualify. If approved to join, users can also purchase and manage policies, file claims, and obtain roadside assistance through the app. Root is currently available in 24 states but plans to expand to most of the U.S. by the end of 2019.

It’s a fact of life; Every town has its terrible drivers. But college towns — like the one in which I live — seem to attract bad drivers from all over the country, if not the world. Inevitably, I end up next to them in traffic.

Sometimes, it’s the driver who nearly swerves into you while texting; other times, it’s the truck that rides an inch from your bumper because the speed limit is too low. In those situations, my first thought is often, “How much does this person pay for car insurance?”

But it’s not just the bad drivers who are on the hook for their decisions. As many car owners know, their insurance premiums don’t just cover their vehicle. What they pay contributes to the costs incurred by all of the bad drivers their provider insures. So bad driving can end up costing good drivers money.

The Root Insurance Company set out to change that by basing its premiums primarily on each policyholder’s driving ability.

“I think there’s a huge need in the market for car insurance that’s fair and based on how you drive,” said Lauren Gruenebaum, Chief Product Officer at Root. “That’s what our mission is — to take an archaic product and turn it into something more modern and fair and keep the customer front and center.”

Root leverages technology already built into most smartphones and doesn’t have sales agents. Policy management and claims are handled directly through its mobile app, which is available on iOS and Android.

The service is available in 24 states that cover about 45% of the U.S. population, but Root plans to continue expanding until it can reward good drivers nationwide with the rates they deserve.

Car insurance companies typically base premiums on a customer’s driving record, age, and credit score. Actual driving habits often play a minor role in calculating an individual rate. Those premiums cover payouts for all accidents, which is why drivers may keep paying more even if they’ve never had an accident. The money goes into a pool that covers costs incurred by all drivers insured by the company.

According to Root’s research, the bottom tier of bad drivers is responsible for most accidents. These drivers cost insurance companies the most money, thereby raising rates for the other drivers the company covers.

Root, on the other hand, bases its rates primarily on current driving habits and each customer’s driving record — in that order. It places less weight on other data commonly used to calculate insurance rates, such as credit score, age, marital status, sex, vehicle type, zip code, and prior insurance coverage. Instead, Root bases rates on the demonstrated likelihood of an individual customer’s driving practices causing an accident.

“We’ll only take good drivers,” Gruenebaum said. “And since we’re not underwriting those bad drivers, we can offer even better prices to the people who deserve them.”

This practice of cutting the worst drivers from its client base allows Root to save money, which it passes along to its customers in the form of reduced insurance premiums. Those savings are both a well-deserved reward and an incentive to stay safe on the road.

To apply for Root coverage, drivers can download the mobile app and use their camera’s phone to scan their driver’s license. Based on that information, the app automatically fills in the people and vehicles you’ll likely want to put on your policy. After you confirm your information is correct, you’ll be ready for your test drive.

A Root test drive is a multi-week process that monitors real-world driving behavior. Users enable the app to use their phone’s GPS and motion sensors and leave the app running in the background — all collected information remains private.

As they drive, the app collects data on key driving characteristics. These include braking practices, the times at which you tend to drive, the speed at which you take turns, and the consistency of your vehicle’s speed. The app can discern the differences in motion between driving and riding as a passenger, so you won’t need to worry about being judged for the habits of your lead-footed friends.

Root uses artificial intelligence and machine learning to analyze the data it gathers and determine how much attention the driver pays to traffic while behind the wheel. Distraction while driving is a significant indicator of risk. The app typically takes 2-3 weeks to collect a sufficient amount of driving data.

“We found that having a test drive that’s a few weeks long is pretty representative of how you drive,” Gruenebaum said. “If you get to the end of the test drive and we don’t think you can qualify for a Root quote, we’ll send you a very nice notification that, unfortunately, we can’t insure you.”

But those who do qualify can immediately accept the rate and sign up for a Root policy. The automated process can even cancel the driver’s current insurance policy, saving time, effort, and up to 52% or more on their premium.

“We got that number from talking with customers about how much they were saving,” Gruenebaum said. “And they can save that much because we don’t underwrite bad drivers.”

After downloading the app and starting a test drive, the Root app provides feedback to drivers via a scorecard. This scorecard helps potential customers understand how the app is measuring their driving performance, which is the primary factor in their quote. Naturally, a better score means a better rate on a policy.

Once they qualify for a policy, Root customers can manage it directly on the app, from buying insurance to managing the policy to filing a claim.

To submit a claim, users provide information, including the parties involved in the accident, an overview of what happened, and the address where it took place. The submission process takes only a few minutes, and the claims team will then get in touch with the customer to help navigate the next steps in the process.

In the event of car trouble, users can easily request free roadside assistance — included in every policy — with Root covering the cost upfront.

And, while automation is practical and convenient, Root realizes that sometimes users need help that only a real, live person can provide. That’s why its customer support team is available for policyholders requiring additional guidance and assistance beyond self-service.

Paving the Way for Better Insurance Rates Across the U.S.

While Root may not make the texters or tailgaters in your city better drivers, the company can give you peace of mind that you won’t be paying for their accidents. Root rewards drivers who take the safer approach and welcomes their feedback on how it can improve its services.

Lauren Gruenebaum, Chief Product Officer at Root, spoke with us about the company’s unique approach to insurance.

The company often reaches out to customers to ask what they like most about the service and solicit suggestions for improvements, which are taken into consideration as the company plans its future.

Thus far, Root customers appreciate the app’s ease of use, and, of course, the money they save on insurance. But the company does get plenty of questions from anxious drivers who want to know when Root will expand into their state so they can join.

That’s why Root is adding states as quickly as regulatory and legal strictures allow, and the company hopes to cover drivers in most of the U.S. by the end of 2019 — with an ultimate goal of offering nationwide service shortly after that. On its website, Root provides a map of where coverage is currently available and where the company is expanding next.

“Keep tabs on where we’re going. If we’re not there yet, we’ll be there soon,” Gruenebaum said.