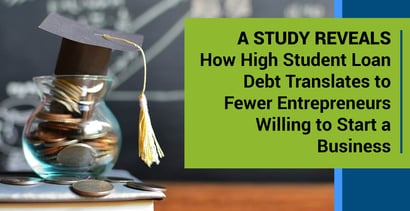 As a Contributing Editor at BadCredit.org, Matt uses his financial expertise and communications background to keep audiences informed on ways to make their financial lives easier. By exploring the latest fintech, budgeting tools, and financial literacy options, Matt hopes to help subprime consumers move into the prime territory.

In a Nutshell: At around $1.5 trillion, student loan debt in the U.S. is quickly becoming what many experts are categorizing as a crisis. It is only outranked by outstanding mortgage debt and is higher than both auto loans and credit card debt. A recent study published in Marketing Science, the journal of the Institute for Operations Research and the Management Sciences (INFORMS), explores the relationship between student loan debt and entrepreneurship. “The Cost of Financing Education: Can Student Debt Hinder Entrepreneurship?” was written by Karthik Krishnan, Associate Professor of Finance at D’Amore-McKim School of Business, Northeastern University, and Pinshuo Wang, who was a doctoral student at the time and is now an Assistant Professor in the University of South Florida’s Muma College of Business Finance Department. We recently spoke with Krishnan to learn about this pioneering study.

Student loan debt in the U.S. is no joke.

In fact, the term “crisis” is used regularly in the media to refer to the situation.

So, what does this all mean? Well, a lot of different things — let’s take a look.

Homeownership rates have dropped for people between the ages of 24 and 32, according to NPR, and evidence points to massive student loan debt being a major reason these young adults are putting off buying homes.

Other evidence shows that millennials are also postponing getting married due to student loan debt. Not to mention, the whole situation is a real economic drag.

But there was one study in particular that recently caught our eye. This one looks at how student loan debt may be impacting entrepreneurs in the U.S. The study, titled “The Cost of Financing Education: Can Student Debt Hinder Entrepreneurship?” was published in the October 2019 issue of Marketing Science, the journal of the Institute for Operations Research and the Management Sciences (INFORMS).

The study was conducted by Karthik Krishnan, Associate Professor of Finance at D’Amore-McKim School of Business, Northeastern University, and Pinshuo Wang, who was a doctoral student at the time and is now an Assistant Professor in the University of South Florida’s Muma College of Business Finance Department.

We recently spoke with Krishnan about the study, including how the duo conducted the research, the state of entrepreneurship in the U.S., and how changes in higher education laws may be impacting those who may be interested in starting a business.

“Broadly speaking, there were some studies on the evidence of declining entrepreneurship rates in the U.S. around the same time we were seeing a substantial increase in student debt levels,” Krishnan said. “One of the key pieces with student loan debt is it’s going to be paid no matter what. It’s effectively non-dischargeable.”

The researchers became curious about how the non-dischargeable student loan debt may take away from would-be entrepreneurs’ motivations to go out and start a company since their limited liability ventures would still be susceptible to their student loan debt burdens.

A recent study in Marketing Science, the journal of INFORMS, examines the connection between student loan debt and entrepreneurship rates.

Krishnan and Wang found the data they were looking for in the Survey of Consumer Finances, conducted by the Federal Reserve.

“The survey data include information on families’ balance sheets, pensions, income, and demographic characteristics. Information is also included from related surveys of pension providers and earlier such surveys conducted by the Federal Reserve Board,” according to the Federal Reserve website.

There is no other study in the U.S. that collects comparable information.

Krishnan said that, despite some limitations, the data is pretty rich when it comes to the outcomes of the students surveyed.

“We use the SCF because it provides the two important variables for the analysis we conduct, namely, student debt amount and whether or not an individual starts a business,” according to the paper. “Beyond this, the SCF provides information on how to account for imputations, sampling and survey error, and survey weights, which help us to easily incorporate this data in a regression framework.”

Krishnan explained how, when an entrepreneur is running a startup, he or she often relies on the limited liability company classification to separate their personal assets from their business assets. But when someone takes on student loan debt, limited liability is no longer possible.

He said that if the business fails, these entrepreneurs still face debt they cannot avoid.

Karthik Krishnan and Pinshuo Wang are the authors of “The Cost of Financing Education: Can Student Debt Hinder Entrepreneurship?”

“Not only do you not get an income because the business shut down, but you’re not old — all the money and obligations which you’re unable to pay — if you don’t pay, all sorts of bad things can happen to you,” Krishnan said.

What’s more, entrepreneurship often requires a good deal of experimentation to find the formula for success, he said, and there is a lot of uncertainty — including with paychecks — in the early phases of entrepreneurship.

So, the researchers’ primary hypothesis examined whether the non-dischargeable nature of student loans may deter some entrepreneurs from starting a business venture. Krishnan and Wang also explored whether student loan debt could negatively impact an entrepreneur’s ability to raise capital.

Conversely, the researchers found that student loan debt did not have any impact on raising startup capital.

“Our results also suggest that student loan also decreases the incidence of startups that are highly successful,” according to the paper. “Given the high value of student loans outstanding (more than $1 Trillion) and its potentially significant impact on entrepreneurship, we believe that our results shine some light on an important phenomenon.”

Unintended Consequences of How the U.S. Finances Education and the Impact of Declining Entrepreneurship

“Using the Higher Education Amendments of 1992, which made federal Stafford loans more widely available, as an exogenous shock to student debt for those students already enrolled in four-year college at the time of this regulation, we find that student debt negatively impacts entrepreneurship,” according to the paper.

The other big development with repercussions today is the Higher Education Amendments of 1998.

The study found that the non-dischargeable nature of student loan debt negatively impacts the rate of entrepreneurship in the U.S.

“Moreover, the reclassification of student debt as non-dischargeable through personal bankruptcy (by the 1998 HEA) reduced the likelihood of entrepreneurship by students already in four-year college at the time of this regulation and having significant student debt,” according to the paper.

Krishnan said the regulatory changes were valuable to the study because, although one can say there’s a correlation between student loans and entrepreneurship, the researchers needed to show a causal relationship. Which is just what the amendments do.

“Correlation doesn’t cut it,” he said. “We needed an experiment in which something happened where student debt changed.”

Krishnan said that since he and Wang began their study, they have heard many anecdotal stories from individuals whose entrepreneurial plans had been impacted by their student loans, just as the study hypothesized.

The paper was also cited by the White House Council of Economic Advisors.

“We are probably the first to show a causal effect of this debt to entrepreneurship,” Krishnan said. “This is the first big step in trying to understand some of the unintended consequences of the way we finance education.”

One of the primary goals of education is to create and distribute knowledge, which will then help to grow the economy, he said. So, if the system is providing the opposite result in some cases, it’s important to be aware of this. Ultimately, the researchers concluded that evidence indicates recent policy decisions to reduce student loan debt burden may promote entrepreneurship.