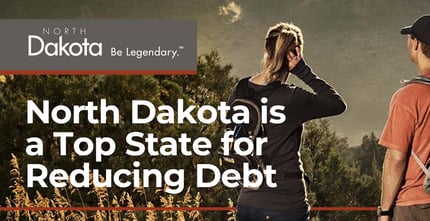 In a Nutshell: With the COVID-19 pandemic affecting the health and financial wellness of communities across the country, many people may be looking for a fresh start in the coming months. And North Dakota may be just the place to begin again. With its low cost of living, low unemployment rate, and diverse job opportunities, the state makes an appealing case for those looking to ease their debt burden while taking in the beautiful scenery. North Dakota encourages entrepreneurs to pursue ideas and builds a nurturing environment for innovation in a number of ways. The state also offers residents a great work-life balance. Outdoor activities abound while the arts thrive in communities all across the state. Because of these reasons we are recognizing North Dakota with our Editor’s Choice Award™ as a Top State for Reducing Debt.

The stock market climbed high in 2020, and the wealth of billionaire CEOs like Jeff Bezos and Elon Musk has grown by jaw-dropping amounts over the course of several months. Meanwhile, average folks in the U.S. struggled with decreased pay, unemployment, and economic uncertainty.

In the early months of the COVID-19 pandemic, credit card debt actually decreased due in part to government stimulus checks and people being extra vigilant about their finances in the face of uncertainty.

As the year trudged on, monetary cushions dwindled, credit card debt climbed once more — and then came the evictions.

Suffice to say, 2021 is a year in which many people will be looking for ways to tackle their debt and get a fresh start. And for those considering a change of scenery as well, North Dakota holds a lot of potential for a variety of reasons.

We recently spoke with Shawn Kessel, Interim Commerce Commissioner for North Dakota about the many ways the state may appeal to those looking to change careers, start something new, or simply reduce their debt.

Because of these considerations as well as other factors that may help people find their financial footing, which we’ll get into below, we are recognizing North Dakota with our Editor’s Choice Award™ as a Top State for Reducing Debt.

A Low Cost of Living and Low Unemployment Rate

Living in a place with a high cost of living can make getting out from under a large amount of debt all that more difficult. Some may argue that wages move up or down accordingly with the cost of living, but that’s not necessarily true — especially with remote working opportunities continuing to grow.

And Kessel said North Dakota’s cost of living is well below the national average. Not to mention that it’s one of the states with the largest wage gains in recent years.

Shawn Kessel is the Interim Commerce Commissioner for North Dakota.

“With a booming economy, a high quality of life, and a competitive cost of living, North Dakota has been rated one of the best places to live in the United States,” according to the state website. “Living here means having friendly and safe communities, a strong educational system and low crime rates — all at a cost that’s far less than our coastal counterparts and most of our neighbors.”

And, while the U.S. unemployment rate reached frighteningly high levels during 2020, North Dakota’s remains lower than many other states.

“Our unemployment rate right now is about 3.75%,” Kessel said. “Our pre-COVID unemployment rate was less than 3%, around 2.7%. That obviously varies regionally across the state. I used to be a city manager in western North Dakota. I was there about nine years and the majority of the time the rate was closer to 1%. It all depends on where you’re at.”

Kessel added that wages in North Dakota are very competitive.

“North Dakota is the only state in the nation that has a median wage over $15 an hour,” he said.

“We’ve been involved in 18 separate and distinct affordable housing projects over the last couple of years,” Kessel explained. “And some of these in our smallest towns and others are in our largest towns. You can acquire a nice house in some of our smaller communities for less than $100,000.”

Of course, homes in North Dakota’s larger, more populated areas will cost more, Kessel said, but the affordability and value is much greater than many states offer.

As far as job opportunities are concerned, North Dakota offers a surprisingly diverse range of industries.

“The sectors that dominate the economy include energy, agriculture, hospitality, construction, healthcare — those are the huge industries in North Dakota,” he said.

The state isn’t satisfied to rest on its laurels, however. It encourages entrepreneurs and works to maintain a nurturing environment for innovation.

“From launching the nation’s first operational test site for Unmanned Aircraft Systems to developing cutting-edge precision farming practices, our state is committed to policies that create an environment where innovation thrives, and new enterprises can entice and retain top talent,” according to the website.

It’s not just talk either — the state’s ND Grant program is just one way North Dakota turns its words into actions that support the growth and development of ideas.

The program can help participants tap into the talent and extensive research base of North Dakota’s research universities, access up to $300,000 in matching funds for qualified projects, and gain funds for research, development, and commercialization in a variety of industries.

Sure, we’ve been talking a lot about work so far, but that’s only part of the equation. Striking a good work-life balance is essential for a fulfilling career and home life.

“In North Dakota, we really do have it all: the highest quality of life in the nation; chart-topping economic growth; breathtaking national parks; history, culture and the arts; and some of the gosh darn nicest people you will ever meet,” according to the state website. “North Dakota is for those who want to live extraordinary lives without paying an enormous price.”

Kessel discussed some of the nonwork-related perks of living in North Dakota.

And, he said people can find plenty of great things to do no matter what season it is.

“A fishing season that never ends; waterfowl, pheasant, deer and big game hunting; miles of snowmobile, mountain bike, and hiking trails; AND more lakeshore than the state of California (yes, it’s true!) — that’s enough to make anyone go outside and stay,” according to the website.

But it’s not all about outdoor recreation. North Dakota has plenty to offer by way of the arts and culture.

“From the Enchanted Highway to the Medora Musical; from moving pictures to the Makers Movement; from art and wine walks to popup parks, North Dakota is brimming with a bevy of year-round entertainment options to stir the soul and expand the mind,” according to the website.

And casinos, big-name concerts, local music scenes, festivals, and the theater all add up to a cultural smorgasbord, according to the state website.

If you’re looking for a fresh start, whether it’s continuing your current career, starting a new career, or simply enjoying a lower cost of living and higher quality of life, North Dakota is certainly worth considering.