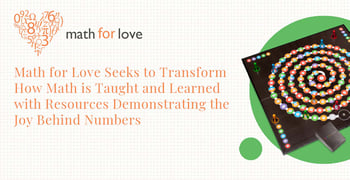 In a Nutshell: Math strikes fear into the hearts of Americans across the country, but the husband-and-wife team of experts Dan Finkel and Katherine Cook are determined to change this through Math for Love. The company’s goal is to illuminate the beauty, playfulness, and fun behind mathematics to make it more accessible and easy to learn. Math for Love has developed a bevy of resources using its play-based philosophy, including award-winning games, a variety of lessons, and a K-through-5 curriculum. The organization has also focused its attention on delivering valuable math resources to help students and parents stuck at home during the COVID-19 pandemic.

As a writer, the thought of carrying out math equations more complex than calculating the tip at a restaurant can make my brain feel like it’s going to jump out of my head and run away.

As a youngster, my math teachers — and the math curriculum at the time — were quite Draconian in their approach to numbers. We often weren’t shown the real-world applications of the problems we were solving.

Instead, we were taught to memorize certain methods, then the teacher would give us equations on a sheet of paper and tell us to figure it out.

No fun, no context, just numbers — and now, I’m a writer. That’s an equation I can understand.

I also understand that it doesn’t have to be that way, especially for kids learning math concepts for the first time.

Husband-and-wife math experts Dan Finkel and Katherine Cook also know that it doesn’t have to be that way, and that math can actually be — gasp — fun. The couple founded Math for Love in 2010, inspired by their passion for math and with the mission to transform how math is taught and learned.

“One of the things that I love about math is that it is beautiful and powerful,” Finkel said. “It makes you more powerful in your life and gives you more options, more control, more insight into what’s happening. At the same time, it’s sort of this joyful, fun, free activity that just enriches your life.”

Math for Love develops math games and curriculum, and many free lessons that it makes available on its website. Finkel and Cook also write puzzles, produce math-art shows, and anything else they can do to show how math is beautiful, fun, and life-changing all at once.

“It’s really nice that math can do all of these things, but there is just a huge number of people who have been alienated from the subject,” he said. “I really see it has a kind inheritance that gets wrenched away from people.”

Young children are naturally drawn to mathematical thinking, Finkel said, and love playing around with numbers, shapes, and patterns.

“It feeds them from a very young age, and I think it speaks to the naturalness of finding structure imposing order on the world to make it more understandable,” he said.

The company focuses on nurturing these instincts in school settings and at home.

“We looked at what the highest-leverage places are to create change, and there are three major areas that we zeroed in on,” Finkel said. “One is teachers, which I think is just a huge opportunity.”

He said that even teachers can carry around what he calls math trauma. Math for Love can help these teachers overcome their negative experiences with math and become excited to share a different point of view on mathematics with their students.

The next area Math for Love focuses on is parents.

“We want to insert the value of thinking deeply and slowly as opposed to just having more artificial, shallow ways of gauging success,” Finkel said. The organization wants to help parents move beyond just worrying about whether their child is doing well in math, but to see the value and importance of it as part of a well-rounded education.

“Then there’s the systemic role — administrators and principals — and trying to figure out how to make structural change in schools,” Finkel said.

Finkel and Cook have developed a treasure trove of resources that make math fun and entertaining — and perhaps most importantly, they work.

“We’ve got a ton of free resources on our website,” Finkel said. “We’ve got all sorts of lesson plans, free games to play at home, and free openers and explorations to try in classrooms or at home.”

Finkel and Cook have also developed board games that have received the stamp of approval and awards from some notable organizations, including MENSA, Dr. Toy, and the National Parenting Center.

One of the games the couple developed is Prime Climb, which Math for Love describes as a beautiful, colorful mathematical game.

“Prime Climb is a perfect game for ages 10+ (or 8+ with adult guidance) to explore mathematical structure in multiplication, division, and prime numbers in a fast-paced, dynamic game of strategy and luck,” according to the company website.

The other game Math for Love currently offers is Tiny Polka Dot, which encourages number-loving fun.

“Tiny Polka Dot is the playful way for children ages 3 to 8 and up to fall in love with numbers,” according to the company. “With eye-catching, colorful cards and 16 easy-to-learn games, Tiny Polka Dot is built to grow with your child, teaching critical skills in counting, arithmetic, and logic along the way.”

The couple has also written a play-based, kindergarten through fifth-grade supplemental or summer curriculum, he explained. The curriculum was first adopted by Seattle Public Schools in 2016 before it began spreading throughout Washington, then around the country.

Since March, parents, teachers, and students have been forced to adjust to a new normal since the COVID-19 pandemic has closed school doors across the country. Schools quickly shifted to an online learning model which has presented challenges to all parties involved.

“Right now is a very interesting time,” Finkel said. “Because schools are now doing remote learning, everyone’s at home. So, right now, we’ve shifted to really focus on how parents can have productive conversations with their kids at home.”

This includes figuring out what kinds of activities they can do together that will be fun, not too stressful, and educational, he said.

Math for Love has posted a number of resources on its website aimed at students and parents to help them get through this difficult time. The organization has also been sending out messages to its email list that include free games and ideas for at-home exercises that aren’t necessarily mentioned on the Math for Love website.

“We thought some specific suggestions might be appreciated, especially for families who are at home with one or more kids and looking for fun, educational ways to pass the time,” according to the company.

Finkel is also currently adapting the Math for Love curriculum to an online learning model, which he said has been a huge undertaking.

He has also been making a point to write more blog posts with helpful ideas and resources during this time.

And regardless of what the new normal will be as far as classroom or virtual learning over the next year or two, Finkel said it’s clear that math education needs an overhaul.

“What we’ve done in the past obviously hasn’t worked. Every public conversation about math on TV or the radio is prefaced with a warning because the public is afraid of it because they’ve had horrible experiences with it,” Finkel said. “That shows us that we’ve not done a good job teaching it. We have to come up with other ways.”