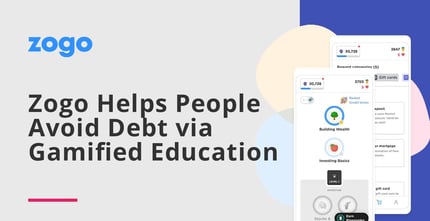 In a Nutshell: Financial literacy initiatives are often lacking in U.S. schools and households. And although an abundance of free and readily available resources exist online, many people simply don’t use them. Zogo is changing all that with its engaging, gamified approach to financial literacy. The app includes more than 300 quick and educational modules addressing over 120 finance topics, from debt to credit cards to retirement. Zogo users can earn a variety of rewards for completing modules. The company partners with institutions in 40 states to deliver the app to the partners’ customers.

In the U.S., children are taught from an early age about the value of a quality education. Schools dive deep into English, math, and history. But they often gloss over or completely ignore a whole topic that we use every day as adults — financial literacy.

Students are often turned out into the real world without any concrete understanding of personal finances. This opens the door to a number of potential pitfalls down the road, including using credit irresponsibly and falling into debt.

“I was a sophomore at Duke University and got super frustrated with how the schools are delivering financial education to our generation,” said Bolun Li, Founder of Zogo. “And when I was in high school, there was a three-hour long financial literacy seminar provided by a local bank. No one was paying attention.”

Li said that as the bank representative droned on about debt and other financial topics, students were texting one another and doing everything except listening to — perhaps understandably — the extremely dry presentation on money.

“By the end of it, the banker would give each of us a little flyer that said we could open a checking account and receive $20,” Li said. “It was just a really terrible experience.”

Li said that when he was at Duke, he received zero financial literacy education. And some of his smartest friends knew next to nothing about personal finance.

That’s when he decided to start Zogo, a financial literacy platform built with Gen Z in mind. Zogo makes learning about important financial topics like credit cards, savings, and debt engaging and even fun.

“It really addresses a two-sided problem,” Li said. On one side is financial institutions not knowing how to reach younger generations in formats they like. On the other side is the younger generations — they just don’t have a fun, engaging, and simple way of learning financial literacy growing up.”

Li created Zogo while he was still a student at Duke University, from where he recently graduated. Who better to tap into the preferences of Gen Z than a member of the generation?

“Our belief at Zogo is that students are rebellious, right?” Li said. “If the teacher tells them to do something, most of the time they will do the opposite. So, we really want to do this from the bottom up to get students inherently interested in financial literacy. And get the parents to be interested also.”

Bolun Li is the Founder of Zogo.

Li said the idea was to create a very simple tool that didn’t require a teacher or bank representative lecturing on finance topics. Instead, students would be able to learn on their own, and actually want to use the tool and spread it to their friends.

“Zogo teaches financial literacy in a way that Gen Z actually loves,” according to the company website. “On their phone. Gamified. With incentives embedded.”

Zogo users earn rewards such as gift cards or checking account bonuses for learning on the app.

Li said that financial literacy resources are readily available from many online resources these days. But people don’t actually use them until they run into some kind of financial problem, and it’s too late.

“So what we did at Zogo is to bring in incentives and give people a very simple reason for getting onto the app,” he said. “And it takes fear out of the equation. Instead of the mindset that they are using something educational, they think about how they are going to be earning something and it brings out a different emotion.”

“Classrooms? Seminars? Nope,” according to the Zogo website. “Our users learn everything on the Zogo app with 300-plus modules, at their own pace.”

Li explained that the app includes more than 120 topics that cover nearly anything you need to know about finance — from managing a checking account to avoiding debt and saving for retirement.

“Each topic has about 15 modules within it,” he said. “So, altogether, we have more than 300 modules. Each module consists of five Twitter-style snippets, so super short, like 250-character snippets.”

Then, short quizzes accompany each module.

“There are five quizzes at the end that are very fun, interactive quizzes that test people’s knowledge. By completing the modules the users will earn this currency called pineapples in the app. And then they can use the pineapples to redeem for rewards.” — Bolun Li, Zogo Founder

In fact, Zogo’s slogan is earn while you learn, he said.

“It’s an incredibly effective way to incentivize engagement and learning,” Li said. “And, believe it or not, what we’ve seen with the younger generations is investing is the number one topic people pick.”

Following close behind in popularity is budgeting, he said.

“And, then, for older generations — we have a ton of users who are millennials or even older — the most popular one is savings, and then retirement,” Li said.

Zogo is a useful tool that is helping to change the landscape of financial literacy with its easy-to-use and intuitive interface, combined with its incentivized approach to learning about money.

Partnering with Institutions in 40 States and Growing

“Zogo enables financial institutions to easily customize the learning experiences in-app,” according to the company. “Expect your logo and branding everywhere. Create modules that talk about your checking, savings, or other products. Offer rewards such as direct deposit, loan discounts to motivate users. Download impact reports and track the engagement of users in the app.”

Li said that Zogo is on track to partner with more than 280 financial institutions by the end of the year. And it is currently available in institutions in 40 states.

Many of Zogo’s partners to date have been credit unions, which are known for their focus on financial literacy.

“I just started using this app and I’m really enjoying it so far!” wrote a Zogo user on the company website. “I did not know about Diamond Credit Union prior to using the app and I’m happy to read about it and hear that it’s in my location. Thank you for partnering with Zogo to provide this information!”

But it’s not just community-focused financial institutions that Zogo partners with, Li said.

“We’re also expanding into some of the larger financial institutions across sectors, and not only banks but also insurance companies, investment companies, so on and so forth,” he said.

In March, Zogo partnered with global financial firm American Express to help its card members better understand how to manage their finances in a fun and engaging way.

Credit unions as well as these larger financial institutions are always looking for ways to reach younger audiences, and with Zogo’s white label product and proven effectiveness, it makes for an appealing option.

Li said the company plans to continue adding partners and expanding into new states wherever possible. And it has some exciting new partnerships and announcements on the horizon.

“One thing that I would love to share with the audience is that we are starting to develop what we call the Toggle Toolkit inside the app,” he said. “As users complete certain modules or complete certain topics, they will unlock this very unique and gamified budgeting tool that helps them put their knowledge into practice.”

GFLEC Report Looks at Financial Literacy Among Hispanics in the US