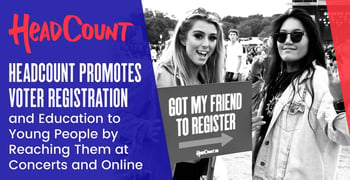 In a Nutshell: HeadCount launched in 2004 as a way to help young people register to vote, primarily by going to where the young people are — at concerts by popular artists. The nonprofit partners with musicians across an array of genres and maintains a presence at their concerts where they can engage and educate concert-goers about voting. And, in the process, it fulfills its primary mission — registering young people to vote. HeadCount also reaches young people through social media, with its artist partners name-checking the organization in their posts and tweets to help get their fans to register to vote. As a nonprofit, HeadCount depends on its volunteers to help things run smoothly and spread the word about the importance of voting to young music fans.

If music fans didn’t know Billie Eilish’s name before the 2020 Grammy Awards, they probably do by now. The 18-year-old singer became the youngest person ever — and the second person ever — to win all four main categories this year: Best New Artist, Record of the Year, Song of the Year, and Album of the Year.

On March 3 — Super Tuesday — Eilish posted a video on Twitter in which she said, “Like a lot of people, I’m going to be voting for the first time — and so are you. You’ve got to make sure you’re registered to vote already, pre-registered to vote, whatever it is.”

She then directed followers to swipe up to get more information from HeadCount. Eilish has access to 3.8 million Twitter followers, which means that by partnering with Eilish, so does HeadCount.

This is just one of many ways HeadCount is fulfilling its mission to get as many young people registered to vote as possible. HeadCount representatives can be found at concerts across the country educating attendees and helping them check voter registration and helping them register.

“HeadCount started in 2004 when our Co-Founders Andy Bernstein and Marc Brownstein recognized an opportunity,” said Sarah Frankel, HeadCount’s Social Media and Marketing Manager. “With Marc being a member of Disco Biscuits, the band was playing concerts and were in this space where they were already engaging music fans, and he saw an opportunity to reach people and register them to vote.”

So, what started as a few people going to shows and registering people to vote grew into what is now a national network of musicians, bands, and corporate partners coming together to raise awareness about voting and to help people register.

Eilish is just one of the hundreds of artists featured on the HeadCount website. From Bob Weir of the Grateful Dead to Jay-Z, Ariana Grande, and Nine Inch Nails, music fans of all kinds are likely to come across HeadCount in some form or another.

“HeadCount is a non-partisan organization that uses the power of music to register voters and promote participation in democracy,” according to the organization website. “We reach young people and music fans where they already are — at concerts and online — to inform and empower.”

Frankel said it really boils down to HeadCount asking how it can make sure that as many people are registered to vote as possible.

“We register people of any age, political background, race, gender identity,” she said. “But we really do want to make sure that young people are voting. Young people tend to not vote, whether it’s due to not accessing education about what’s happening, or just maybe accessibility as a whole.” 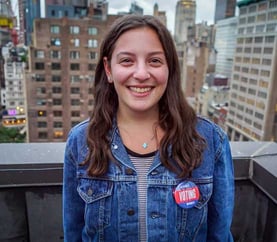 Sarah Frankel is the Social Media and Marketing Manager for HeadCount.

This is the main reason HeadCount partners with artists and events that bring in the younger demographic, Frankel said. HeadCount wants to make it as easy as possible for this age group to be able to vote.

“It’s really cool that there’s this community of music fans that are already so passionate, and it’s cool to work with artists who are also passionate about this cause because they can inspire each other,” she said. “Whether that’s physically registering with us to vote at a concert, or even being part of the organization and volunteering.”

When artists are very passionate about something, that passion can really be felt by others and make a real impact, she said.

In fact, Ariana Grande’s partnership with HeadCount and her passion about the issue led to a new HeadCount record for the number of voters registered on a tour.

“We are excited to announce that @ArianaGrande’s Sweetener World Tour has broken HeadCount’s all-time record. With 33,381 voter registrations and actions, it is now the most successful tour in our history,” HeadCount wrote in a December 2019 Tweet.

“i’m so incredibly proud of my fans for engaging in this. thank u so much for investing in our future and for committing to making a change together,” Grande replied.

Frankel said many of the artists HeadCount has partnered with go beyond simply allowing the organization to have a presence at their live shows.

“So many of them, across the board, have been really engaging,” she said. “If you go on social media, you’ll see that — especially around National Voter Registration Day — our artists and partners will post pictures of themselves with our clipboard that says ‘Register to Vote.’”

These types of social media pushes are extremely valuable because National Voter Registration Day takes place near the end of September, just ahead of a lot of the major registration deadlines, Frankel said.

Social media has a really broad reach, especially with the bigger pop stars, Frankel said. But HeadCount’s artist partners push out messages to their fans all year round, not just around significant dates.

HeadCount’s partners often promote the organization and its cause via their social media pages.

Some artists will also encourage people to vote during their live shows.

“Maggie Rogers would give a shout-out on stage during her performance and saying, ‘I have this organization called HeadCount here.’” Frankel said. “She did that every single night, which is incredible, to see artists on stage sharing this information.”

During Grande’s Sweetener World Tour, a video urging young people to vote or register to vote played every night in between the opening act and Grande’s performance.

Frankel said these are just a few of many examples of how artists have found ways to support HeadCount.

“Sometimes, the artists themselves will come to our booth and volunteer, so to speak, and stand at the booth and talk to our volunteers and the people coming up for more information,” she said. “It’s really cool that they’re taking time out of their day to help out with this.”

HeadCount is Powered by Volunteers

As a nonprofit organization with partners and events continually taking place all over the country, HeadCount relies on volunteers to help fulfill its mission.

Frankel said that HeadCount is always looking for volunteers to help out.

“Some people volunteer with us out of the goodness of just wanting to help register people to vote, and they might not even like the band they’re going to see,” she said. “And other times, it’s a really cool reward. The person dedicated their time to volunteer and then they get to see someone they really enjoy perform.”

Others have discovered new music they may not have otherwise been exposed to through their volunteer experience, she said.

“The main responsibility of a HeadCount volunteer is to approach people and ask ‘Are you registered to vote at your current address?’ and then assist them as they complete a voter registration form,” according to the website.

“You need to be outgoing, a good communicator, and a true believer in democracy. You also need to work hard — volunteering is fun but it definitely requires high-energy and a can-do attitude,” according to the organization.

Volunteers are expected to engage in these activities from the time the venue doors open to when the headlining act starts playing. They also work during set breaks. Volunteers also participate in a training session and setting up and breaking down the HeadCount table.

In addition to artists, events, and volunteers, HeadCount also receives support from corporate partners, such as Ben and Jerry’s, Patagonia, and MTV, as well as other organizations like Reverb, the NAACP, and Rock the Vote.

Thanks to Billie Eilish, Ariana Grande, and hundreds of other popular artists and countless volunteers over the past 16 years, HeadCount has helped register nearly 650,000 voters in the U.S.