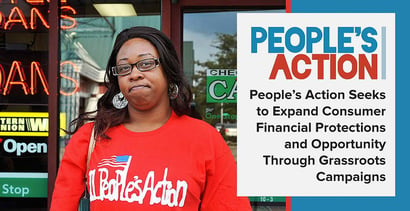 In a Nutshell: Millions of low-income Americans who face financial difficulty turn to lenders who promote payday, title, and other high-interest consumer loans. People’s Action is a national grassroots network of state and local organizations that seek to address urgent issues like predatory lending practices and consumer protections. The group is responsible for much of the legislation passed in recent years that helps protect the most vulnerable Americans. However, the organization warns of risks to hard-won victories if regulations continue to be rolled back under current policies.

When her daughter was seven months pregnant, Billie Aschmeller took out a $1,000 loan using her car title as collateral. Although she was on a fixed income, Billie wanted to help buy items her daughter and new grandchild would need — including a crib, car seat, and a new winter coat.

Every month Billie paid $150 on the loan, and after nearly a year she had paid more than $1,500 to the title loan company; however, she still owed the lender more than $800. She even took out another payday loan one month because she didn’t have enough to make the title loan payment. And that’s when things got desperate.

Billie found herself living in her car because she could no longer afford to pay rent in addition to her loan payments. She said it was stressful, and she felt that, at any moment, everything she owned could be taken from her.

Billie’s story is not unique; millions of Americans find themselves in similar circumstances when dealing with short-term lenders. Many of these loans come with interest rates over 400% on an annual basis. Fortunately, one group is working to change this growing problem.

People’s Action is a national grassroots network of state and local organizations that seek to address the urgent issues facing communities in the areas of racial, gender, and economic justice.

“We support the work of our state and local organizations, the folks who are out knocking on doors and organizing in their communities, and we pull all of that energy together into national campaigns,” said Jessica Juárez Scruggs, Deputy Director of Policy at People’s Action. “We’re the current iteration of a long-standing organization, going back to the 1970s.”

The merger of powerful national organizations with a history of success in policy generation formed People’s Action and the People’s Action Institute. People’s Action, along with partners including Americans for Financial Reform and the Center for Responsible Lending, has played a crucial role in enacting some of the most important consumer protections in recent history and plans to fight for even more as the political climate has shifted to one of deregulation.

Taking On Wall Street and Working on Financial Reform

As a network of organizations, People’s Action works on campaigns like Caring Economy, which fights for things like paid family leave, and Family Economic Security, which advocates for a living wage and dignity in the workplace. But perhaps the most ambitious campaign is the one that goes head to head with Wall Street.

The Debt and Wall Street campaign seeks to replace a financial system that extracts from families and communities with one that invests in them. This campaign directly takes on the predatory short-term lending industry by calling out the damage being done to communities.

“When you have folks in this position who don’t really have a cushion, they’re susceptible to consumer abuses, unfair lending, and predatory lending practices,” Jessica said. “This isn’t about people making poor choices; it’s about people not having a choice. And this is not an unfortunate side effect of payday lending — it’s actually how the product is designed,” she said, referring to the problems that Billie experienced.

As part of the Debt and Wall Street campaign, People’s Action directly addresses changes taking place at the CFPB, an entity set up to protect consumers in the wake of the 2008 financial crisis.

The new head of the agency, Kathleen Kraninger, has no prior experience in consumer finance or in financial services. The CFPB is the agency charged with regulating the payday loan industry.

“We’re seeing a rollback of protections and even threats to more longstanding consumer rights,” Jessica said. “We’re watching carefully as the current administration’s policies and programs seem to move away from protecting consumers and families.”

The High Cost of Rolling Back Regulations

When it was created in 2010, the CFPB was tasked with monitoring and regulating such consumer financial products as mortgages, credit cards, student loans, and the short-term or payday loan industry, among other responsibilities. Under its initial leader, Richard Cordray, appointed by then-President Obama, the CFPB returned more than $12 billion to consumers and took in nearly $600 million in civil penalties.

Under the current administration, however, enforcement actions have slowed by 75%, according to The Washington Post. People’s Action hopes to remedy that rollback of enforcement by the CFPB.

“After all the work and the grassroots demands that the CFPB take on these predatory lenders — five years’ worth of looking at how the industry could be regulated — the new administration came in and is now trying to roll back those protections.” — Jessica Juárez Scruggs, Deputy Director of Policy at People’s Action

“Besides Kathleen Kraninger, others at CFPB have demonstrated a real antipathy toward consumer protection. Some of them have come out and said that they don’t think consumer protection is a worthy aim, and they’re the ones now leading the CFPB,” Jessica said.

With less enforcement of consumer protection laws, People’s Action fears a return to a time before the crackdown on unfair financial practices, with consumers being hurt by companies more concerned with profits than fairness. Before the leadership changes, the CFPB had spent five years developing rules against predatory lending.

“After all the work and the grassroots demands that the CFPB take on these predatory lenders — five years’ worth of looking at how the industry could be regulated — the new administration came in and is now trying to roll back those protections,” Jessica said.

Protecting consumers from unfair and predatory lending is not a new or unique idea. It has worked in other settings, including for the U.S. military. Under the Military Lending Act (MLA) of 2006, Congress said payday lenders cannot charge more than a 36% annual interest rate to service members, their spouses, or their dependents.

Voters in Colorado’s midterm election also followed the example Congress set with the MLA by approving a measure that established the state’s own limits on payday lenders. By a 3-to-1 margin, Colorado residents voted in a law capping short-term lending rates at 36% for any lender doing business in the state. People’s Action hopes to generate momentum behind a national push for similar short-term lending rate caps.

“When we see this in a state like Colorado, and in other deep-red states, it is common sense and popular across the board,” Jessica said.

However, this is another area where the CFPB under the current administration has weakened or not enforced the regulations on the books, including those protecting service members under the MLA.

One bright spot in the saga, according to Jessica, is the new balance of power in the incoming Congress. With Democrats likely to press any head of the CFPB to enforce regulations, there’s hope that consumers will regain protections that have been eroding recently. When combined with the pressure being applied by People’s Action, this may be just the relief consumers need.

“When people hear about the wholesale deregulation and removal of commonsense protections and the erosion of the structures that protect American families, it’s easy to show them that this is a bad thing,” Jessica said.