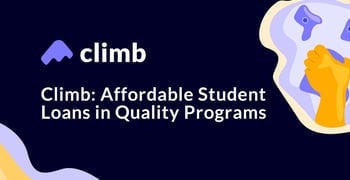 In a Nutshell: Student loan debt continues to hang over the heads of millions of Americans. Climb Credit offers a student loan platform designed to help students get into careers that can help them pay off their loans without the extreme burden so many feel. The company works with schools to evaluate graduation and placement rates, and the potential earnings in a particular field, among other factors. That means students who use Climb are going into vetted programs that are more likely to give them a greater return on their investment. The company, which works with traditional college students as well as people who are switching careers, may also offer opportunities to those out of work due to the COVID-19 pandemic. You don’t have to be employed to qualify for Climb loans since the company looks at how much you’ll make upon graduation rather than how much you make now.

Student loan debt is an ongoing crisis in the U.S. About 44 million Americans have student loans for a collective total of about $1.6 trillion. It accounts for the second-largest classification of consumer debt and is only surpassed by mortgage debt in the U.S. And it’s only expected to grow.

Many factors have contributed to the student loan debt crisis, including rising tuition costs and less funding for higher education, in general. A lack of financial literacy may also be contributing to high debt burdens.

I know from personal experience that when I took on student loans to attend graduate school, the financial implications of the debt I would carry upon graduating was not made clear. Student loans were treated as a formality, and paying them back was something to worry about in the distant future.

The future is now, and I am reminded monthly of my student loan debt as I send off a payment.

Many students also may not consider what the return on investment will likely be for the degree they are pursuing. If a student takes on a significant amount of debt to earn a degree in a field that is not particularly lucrative, he or she may struggle for years to pay off student loans.

Climb Credit is aware of these problems and offers a more affordable approach to student loan debt. The company comes at the issue from a fresh perspective. Rather than just evaluating factors like creditworthiness, Climb looks at the program the student is interested in, placement rates, and the likely ROI.

Funding Careers, not Just Education, Based on the Program, Graduation Rate, and Placement Rate

“Coding boot camps were starting to take off, and through that process, Climb began to recognize that there were a lot of accelerated, skilled trades and training programs available beyond coding boot camps that also provided really great career results to students,” she explained.

So Climb broadened its focus and established its mission to expand access to career advancing education.

Climb stands apart in a number of ways from other companies that specialize in student loans. Rather than just evaluating the traditional factors that determine a student’s creditworthiness, Climb takes into consideration the courses or programs that students will be taking and their career goals. This model helps them to be able to approve more students who otherwise wouldn’t be able to attend. However, they price interest rates based on a student’s FICO score.

“Want to move ahead in your career? Ready to make a change? It takes the right training and a payment option that’s affordable, fast, and friendly,” according to the company. “Climb brings them all together.”

Laura Fitzpatrick is the Director of Marketing at Climb Credit.

“Our vision is to improve the alignment of school motivations with student career and salary goals to ensure that our students see a tangible, life-changing impact from their education,” according to Climb.

Fitzpatrick said the company thoroughly evaluates every program it works with before adding them to the platform or offering financing to students.

“We basically look at, ‘How much does tuition cost versus how much a student is going to make after they graduate?’” she said. “So, we look at things like graduation rate and placement rate.”

Fitzpatrick said computer science and tech careers tend to have a good return on investment. So does truck driving because the cost of the programs tend to be relatively low.

“You can go from making minimum wage to making $45,000 or $50,000 a year, and overtime,” she said. “The same with heavy equipment. In heavy equipment or crane operation, you make very good money.”

For students who obtain loans through Climb, they can be assured that their earning prospects — if they complete their degree or program — are good, and they are less likely to be swimming in student loan debt for years.

How Climb is Well-Suited for Mid-Career Changes

“A lot of times we think about higher education as students coming out of high school and going into college, but most of the students we serve are actually mid-level career switchers or upskillers,” Fitzpatrick said.

She explained that an example of upskilling would be adding a certificate so you can move up in your current company or field.

Climb helps students avoid taking on unrealistic amounts of debt by evaluating the ROI of specific degrees and programs.

“If you’re 30 years old, maybe have some debt, maybe you have rent to pay, it’s very important for you to understand how much money you’re going to be able to make after your program so that you can plan your life accordingly,” Fitzpatrick said.

She said this approach is interesting because it really makes the investment more important to the students.

“We’ve had a ton of situations where people use these programs to completely switch careers,” Fitzpatrick said. “Maybe you have a bachelor’s degree in something and realize you don’t like that career, after all, then you go to a coding boot camp and become a web developer.”

She said her favorite Climb story is the student who had graduated from college with a bachelor’s degree, earned an MBA, then later in his career realized he hated working in an office environment.

“He went back to school to get a crane operation certificate and ended up making more than he made in his office job and also got to work outside and have the lifestyle that he wanted,” Fitzpatrick said.

The many accelerated programs with strong outcomes that exist today offer an array of opportunities for people to switch careers and not feel like they’re stuck on the same path forever, she said.

The COVID-19 pandemic has made the past few months challenging for many Americans. More than 30 million people have filed for unemployment since March, and many who remained employed have seen their wages slashed.

While it may seem like a strange time to change careers, Climb’s outside-the-box lending platform may hold appealing opportunities for some.

“One thing that’s really interesting about our lending model that’s different from other lenders is that we can lend to people who are currently unemployed because we look at the salary that they’re expected to make after their program,” Fitzpatrick said.

She said that 3 out of 5 people who were unemployed before starting the program got full-time employment after going through Climb.

“Those people honestly would not have even gotten the opportunity to attend,” Fitzpatrick said. “Because if you can’t pay for school, you can’t attend. So, it’s very impactful to be able to look at the salary that someone’s likely to make rather than what they currently make.”

Fitzpatrick said that accelerated programs may prove to be extremely helpful for the many unemployed people in the service and retail industries.

“Getting the skills to be able to make money is something that you need to do in a very accelerated way when you’re unemployed, right?” she asked. “I think there is a really big opportunity for these kinds of programs.”

“There is this idea in higher education that there could be a future where people take micro-credentials that stack up to a larger degree eventually,” she explained. “You’re taking bite-sized pieces of the investment and seeing if you like a career path before you commit four years to it.”

These kinds of programs can really make a difference in the current situation, Fitzpatrick said, where people need to attain specific skills in a faster time frame.

Fitzpatrick said Climb is always looking to improve its offerings and continue to expand access to career-advancing education. To that end, Climb recently launched a zero percent interest payment product.

“It’s a shorter duration than our normal loans, which are typically three or five years,” she explained. “This product is 12 months or 24 months. And it gives students the option to either take a three-year loan that has interest or a shorter-term loan with possibly larger monthly payments but no interest.”