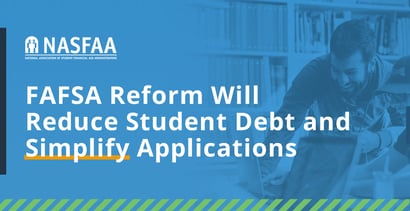 In a Nutshell: FAFSA reform has been a long time coming, but thanks in part to the National Association of Student Financial Aid Administrators (NASFAA), it’s finally on the way. FAFSA was designed to centralize the student financial aid application process, but its complex formula has placed a strain on applicants. Thanks to new legislation, certain information can be drawn directly from IRS filings, reducing application time. It also expands eligibility for Pell Grants, which will reduce the need for students to take out loans to fund their education.

Loan applications are complex technical documents that require a massive amount of personal information. However, the process of students seeking federal dollars to fund their education can be particularly daunting. In recent years, digitization and automation have helped ease the burden, but those innovations can only go so far.

NASFAA — the National Association of Student Financial Aid Administrators — advocates for making the process much easier. It represents 3,000 post-secondary institutions across the U.S., and 9 out of 10 undergrads are enrolled in NASFAA member institutions. That makes the organization a crucial component of higher education in America.

“There’s only so much work that the Department of Education can do to make the Free Application for Federal Student Aid (FAFSA) easier and quicker for students to fill out,” said Karen McCarthy, Director of Policy Analysis at NASFAA. “They can use skip logic and technology all day long, but the underlying formula does not change, so they still need to ask the questions required by the statute.”

NASFAA provides professional development for its member institutions and promotes legislation to enhance student access and success at the post-secondary level.

The organization has been a longtime proponent and champion of FAFSA simplification. In late 2020, the legislation finally passed through Congress as part of the Consolidated Appropriations Act of 2021.

“There was not a lot of other legislation that was moving through congress because of bottlenecks and stalemates,” McCarthy said. “The idea was to tack on the FAFSA simplification bill onto this much bigger bill that was going to move through congress.”

As a result, FAFSA legislation have received a much-needed overhaul. That is good news for students and their families looking ahead toward their future education.

FAFSA was initially designed for federal student aid, while other institutions used private applications through the college board. Those institutions were encouraged to switch over to FAFSA to establish a central, standardized process to apply for and receive aid.

This transition reduced the workload of students and families applying since they only had to deal with one application. However, the application was convoluted and complex, and it remained that way for many years.

NASFAA advocates for legislation to ease the burden on those applying for educational funding.

“The basic crux of the FAFSA has changed very little over the past several decades,” McCarthy said. “Most changes to the FAFSA have been on the technology and operational side. That includes applicants getting their data from the IRS, logic, and moving it from a paper form to a primarily online form.”

That change in presentation didn’t alter the fundamental formula. It was still complicated and difficult to understand, so it remained confusing and time-consuming for applicants. The new legislation goes a long way to remedying that by overhauling the formula itself, not just its presentation.

“Often, the legislation is just the beginning,” McCarthy said. “In terms of getting something on the books, this is the culmination of quite a lot of FAFSA simplification work for us over the past 10 years.”

The new legislation achieves a long-standing goal: simplifying the process and making it more accessible to everyone. That is especially true for students from low-income demographics.

“One of NASFAA’s major goals in our FAFSA simplification proposals is to parse out different groups of students based on their family’s demographic and financial situation,” McCarthy said. “That way, we can ask for less info from families who are on the lower-income side of the range of financial strength. We don’t need to ask them a bunch of unnecessary questions.”

The process is also simplified for families higher up the financial spectrum. That is also valuable since, the higher up the range they sit, the more financial information the formula requires.

The new legislation allows information to be pulled directly from the IRS database. That means, regardless of income level, applicants won’t have to spend time hunting down information and entering it on the form.

“One of the things that this legislation does is get rid of all the untaxed income questions except for those that can be pulled directly from the tax return,” McCarthy said. “It assists all FAFSA applicants in terms of streamlining and making the whole process easier for everybody.”

“One of the significant criticisms we have heard about the FAFSA simplification effort has been that it does not solve the problem of the cost of college and student loan debt and that there’s not enough aid to begin with,” McCarthy said. “Those are real problems as well.”

One solution to those problems is the Federal Pell Grant, an alternative to borrowing money to fund education. The grants are not loans or scholarships but instead a federal subsidy for students working toward bachelor’s or certain other degrees.

It was designed to help students with funding needs achieve their academic goals while mitigating financial hardship and debt.

“About 45% of FAFSA filers are eligible for any Pell,” McCarthy said. “It might not be the maximum Pell, but under this new formula, that would go up. There would be a lot more Pell-eligible students.”

The more students eligible for Pell dollars, the fewer will have to go into debt to fund their college educations.

While Pell funding alone won’t solve the student debt crisis in the United States, it can help ease the strain for the current generation of students and others in the future.

“This FAFSA simplification is aimed at that part of addressing the much larger problem that is out there,” McCarthy said.

Reform Implementation is a Hard-Won Legacy and an Ongoing Process

NASFAA hasn’t been the only champion of FAFSA simplification. Sen. Lamar Alexander of Tennessee, who served as the Senate education committee chair from 2003 to 2021, has also been a longtime proponent of reform.

As he prepares to retire from public service in 2021, the simplification of FAFSA is a capstone and monument to his efforts.

Although legislation has passed, implementation of the new FAFSA formula isn’t going to happen overnight. As with any legislative overhaul affecting funding, there is much interdepartmental work to renovate existing platforms and roll out new digital applications to aspiring college students.

“We are working on an implementation group with the Department of Education, and we’ll be testing and asking members what they see from the school side and how this all goes,” McCarthy said. “We’ll be spending quite a lot of time on this over the upcoming years.”

As of late February 2021, the student debt burden in the United States sits at about $1.5 trillion. To put that in perspective, the entire U.S. national debt was around $27.9 trillion at the same time.

Both are enormous numbers, and while the national debt offers no easy solution, FAFSA reform at least looks ahead to a more positive future for college students. The new financial aid process and guidelines will place higher learning within reach for many by streamlining the application process and reducing the need to borrow money for college.

It will also help foster a stronger financial future for low-income families rather than burdening them with a lifetime of debt.