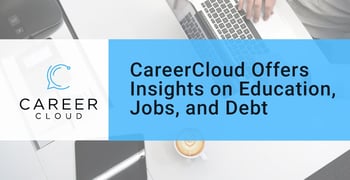 In a Nutshell: CareerCloud distinguishes itself from other career search websites by helping job seekers find meaningful work that fulfills their passions. The platform also allows readers, and those who listen to its podcast, decide if it makes sense to go back to school and take on student debt. CareerCloud’s goal is to allow job seekers to find healthier work-life balances and invest sensibly in their futures.

Since the COVID-19 pandemic began, more Americans are seeking career shifts than at any other time in recent memory. A survey conducted in August 2021 showed that 55% of currently-employed respondents said they would seek to change jobs within the next 12 months.

Some of those workers have found that their career paths don’t align with their values. Either they aren’t working for companies that help them live out their principles, or their work-life balance is off. Flexibility was the top reason workers sought new jobs, even topping pay as the most significant factor.

Mark Hamrick, a Senior Economic Analyst at Bankrate, wrote in a report, “There have been a lot of epiphanies and reckonings that have occurred during that time with respect to how we’re ultimately prioritizing our values, and, of course, how work fits into that.”

Long before the COVID-19 pandemic, Michael Gardon, Executive Editor and Producer at CareerCloud, recognized that a career is just one part of a balanced lifestyle.

“The idea of a career to me is misleading. I view these things as inherently coexisting. What I want to do with the site and the podcast is help people make intentional decisions about how they spend their time,” Gardon said.

That’s why Gardon decided to alter the CareerCloud platform he acquired, which was initially only a job search engine, into one that shares a holistic perspective around work and life. CareerCloud now offers resources and aptitude testing, résumé information, and a podcast that hosts career coaches, résumé writers, and job seekers.

Individuals can often reduce their debt burden from the start by being clear about what career path they want to pursue. That is one reason Gardon and his team invite individuals with diverse career knowledge onto the CareerCloud podcast.

“We love opening up people’s minds and helping them make more intentional decisions about what they do for their career. People are doing interesting things all over the place. Even coming out of college, I feel like I didn’t have a good perspective on what jobs were out there,” Gardon said.

When planning a career or a career shift, people should also balance their long-term earning potential with the debt they accrue for education or training. Gardon shared an example of when taking on debt to develop a skill makes sense.

“The average person makes $2 million in earnings over their lifetime. How much would you pay for a $200,000 increase to get that? When you think about it, paying two grand for a course that will skill you up makes a ton of sense. I might make $200,000 more in my life,” he said.

Ultimately, Gardon doesn’t think that going into debt for education is a problem, as long as that decision will pay off in the end. For instance, some people may be better suited to two-year vocational training rather than a four-year degree.

“I don’t think college is a bad idea, and I don’t think debt is bad. The problem comes when the cost doesn’t match up to what you’re getting,” Gardon said.

If workers decide to take on debt for college or to upskill, Gardon suggested creating buckets that help them pay down that debt faster. Some buckets could include savings, skills training, and developing a side hustle.

As a father of three young boys, Gardon said he aims to engineer his work and life in a way that ensures he can be present for his children.

“That’s the impetus of it and what I like to talk about,” he said.

Gardon suggests that people feel unfulfilled at work even if they make a comfortable salary. Reestablishing a work-life balance can create more time, more peace, or more money — the key ratios important to work-life balance.

He said that individuals should decide which sacrifices they are willing to make to reach their goals. For instance, if someone wants to earn a Ph.D. at age 50, they need to balance the ROI with the time it takes to achieve that degree.

“Is that going to change your life? What are your other options? People get tunnel vision and think there’s only one option. I advocate taking a step back in those big decision moments. If getting your Ph.D. is your thing, do it. But at least you saw everything else with a clear mind,” Gardon said.

Ultimately, Gardon wants to optimize his life for financial independence. Eventually, he wants to engineer a career where he’s working as much or as little as he wants.

CareerCloud also provides job seekers with more traditional tools to find their next career. One popular topic is résumés. Gardon thinks one of the best ways to spend money is having a résumé writer craft that document.

CareerCloud: Reminding Listeners They Only Live Once

Gardon advises readers and listeners to take a more holistic view of their lives. For example, if workers make a lot of money but have no free time, are they living well? Are they preparing for the future if they can make time for several hobbies but lack financial freedom?

Gardon shapes his life around the idea of YOLO, or “you only live once.”

“Our parents may have brushed it aside, but it’s so true. That’s what I’m optimizing for is balance and being able to do what I want to do,” he said.

While optimizing for a healthier work-life balance, individuals need to be introspective and, potentially, invest in themselves to create change.

“It’s way easier than people think to change. It’s never been easier to start a business or an ecommerce shop. So many ways to scratch your itch,” Gardon said.

In the end, every career decision people make is an investment in themselves. If someone has a passion they can’t pursue without taking on debt, that may be the route they need to take to achieve a fulfilling lifestyle.

“You need to understand your options and stay comfortable if things don’t go your way. You are investing your time or your money, but we can bounce back quicker than ever,” he told us.

Gardon’s perspectives on investing and work-life balance are unique in the career arena. CareerCloud offers job seekers a platform where they can invest in themselves wisely.

“I love the idea of combining career and finance, to bridge those two and help people understand how I see the world. That’s what I’m trying to do with the website and the podcast,” Gardon said.