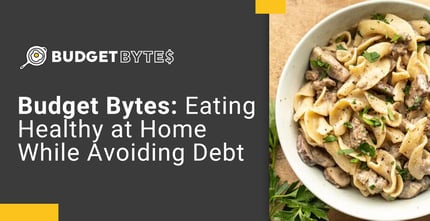 In a Nutshell: People operating on tight budgets — whether they’re climbing out of debt or saving for a vacation — may not look to their grocery bills as the first place to save money. After all, eating on the cheap is often associated with unhealthy food choices. But Budget Bytes demonstrates how people can enjoy healthy, home-cooked meals without breaking the bank. Beth Moncel launched the website in 2009 and has posted more than 1,200 budget-friendly recipes online. Budget Bytes also features valuable how-to guides, meal prep tips, and even meal plans that can reduce stress and lower grocery bills.

Folks who are budgeting to save money, get out of debt, or simply to make ends meet often cross off the least essential costs first from their list of expenditures. This may include things like the costs associated with entertainment, gym memberships, and streaming subscriptions.

One area that may not even play into some people’s minds is their food budget. After all, food isn’t a discretionary expense — it’s essential to life.

It’s no secret that dining out often can burden or even bust generous budgets. For people who live paycheck to paycheck or are paying off debt, a few meals at a nice restaurant can cause a financial crisis.

But cooking and eating at home may be costing you much more than you realize. Grocery bills can get expensive fast. And while it may be tempting to put those costs on a credit card, there’s often no need to go into debt to feed your family well.

While eating is essential, of course, many people don’t associate delicious and healthy home-cooked meals with thrifty grocery store shopping. But the website Budget Bytes demonstrates how these aren’t mutually exclusive concepts.

We recently spoke with Budget Bytes Founder Beth Moncel about her journey to becoming an expert on budget-friendly and nutritious cuisine, the benefits of keeping things simple, and meal prep tips for our budget-minded readers.

“I’m a food lover, number cruncher, and meticulous budgeter. I love science and art, and the way they come together when I cook,” Moncel writes on the website. “I love to create, problem-solve, and learn new things. Making great food is my passion, my purpose, and my favorite thing to share with others.”

“I started Budget Bytes in 2009 as a personal project,” Moncel said. “I had graduated from college two years before that with a degree in nutrition. I ended up not going on to be a dietician — I changed my mind — so I was working a low-wage job, student loans were back in repayment, and I was having a really hard time making ends meet.”

Moncel said she’s always been a meticulous budgeter, yet she was still struggling.

“I had already cut everything out of my budget — all discretionary spending,” she said. “The only thing left that I could change was food. But because I had this background in nutrition, I knew I didn’t just want to eat ramen noodles every day because, in the long run, that’s going to cost me more in poor health.”

Beth Moncel is the Founder of Budget Bytes.

Moncel began experimenting with ways to save money on food, she said. Moncel was working in the prepared foods department at a supermarket chain at the time. She combined her nutrition background, budgeting skills, and the experience she picked up at her job to give her diet and finances a healthy boost.

“I started breaking down the cost of everything that I was cooking and figuring out how much each meal was costing me so I could really see where all the money was going; and if there were any areas that I could cut back on but still be satisfied and have like a well-balanced diet,” Moncel said.

She was able to identify certain ingredients that can quickly make budgets spiral out of control, she explained.

It wasn’t long before Moncel began making a real dent in her money-saving efforts while coming up with great-tasting, budget-friendly, and healthy recipes. Moncel said she began sharing her new recipes on Facebook, and people also began asking her for recipes.

The next logical step was to begin posting her recipes on her own website, and that’s how Budget Bytes was born. The website immediately gained traction with people and made some waves in the media.

“As soon as I saw how big of a need there was out there for that kind of information and just basic cooking skills — because there’s really nowhere for people to learn how to do that — I was like, ‘Okay, I need to keep doing this,’ Moncel said. “And that’s been my mission ever since, for almost 12 years.”

Moncel discussed how her own approach to food has changed over the course of running Budget Bytes, and how she learned to appreciate the value of simplicity.

“My recipe style has definitely morphed over the years, and I think maybe I’ve refined it into something a little bit more specific than in the early days,” she said. “In the early days, I did a lot more things that were DIY, like making my own bread. Over the years, I realized the things that were going to be most helpful to not only my readers but for myself are recipes that are really simple.”

Moncel said a key to eating healthy on a budget is using simple recipes and accessible ingredients.

“I try not to ever use ingredients that are hard to find or that you’ll use once and never use again,” Moncel said. “I also try to use ingredients as close to their whole purchase form as possible. You rarely will see me use just part of a can of tomatoes or something because reducing food waste is really important to me and Budget Bytes.

“For a long time, recipes and cooking sites were stuck in this mid-century recipe rut where things were all canned, condensed soup — just a very bland, heavy kind of feel,” she said. “I think as the world becomes more globalized, so do our tastes in food. So I take a lot of inspiration from cultures around the world.”

Meal Prep Tips and Choosing From More Than 1,200 Recipes on the Website

Visitors to Budget Bytes will find a trove of valuable information on all things related to cooking healthy on a budget. Moncel said she has posted more than 1,200 recipes to the site over the years and is regularly adding more.

“It’s something I’ve been doing before the term meal prep was really even coined,” Moncel said. “In the beginning years of the blog, I was working full time and I was going to school and I would maybe have one day off a week where I could cook.”

Moncel would do all her cooking for the week and portion out the meals for the next six days.

“That’s meal prepping,” she said. “It’s just the most efficient way — for both your time and your money — to feed yourself. It’s not for everybody. Some people have a really hard time with leftovers. But I think everybody can do at least a little bit of meal prepping so you’re not cooking every single day because that’s exhausting.”

Moncel said one valuable tip is to take advantage of your freezer.

“Not only do I freeze portions of things I cook, but a lot of times I’ll freeze leftover ingredients too, so those don’t go bad,” she said. “The freezer is the best tool we have for reducing food waste and taking control of that budget.”

The trick is to keep an inventory of what’s in your freezer, Moncel said. She recommends maintaining a list of freezer contents to help consumers avoid the old habit of tossing something in the freezer and forgetting all about it.

In the end, it’s all about planning, she said.

If you’re paying down debt or simply looking to get away from astronomical grocery bills without sacrificing your own health in the process, Budget Bytes offers a wealth of great information and resources.