How the Emma App Helps Users with Budgeting, Saving Money, and Avoiding Debt 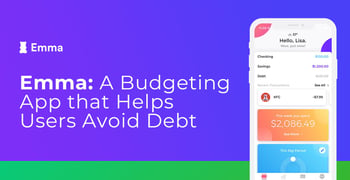 In a Nutshell: Consumers who are living paycheck to paycheck or struggling with debt can use the Emma App to help get their finances in order. The convenient app uses AI-based technology to serve as a virtual financial assistant. Emma can predict potential overdraft fees and help users with day-to-day budget planning. The app can also help users save money by identifying subscription services they may not even know they are paying for. The company prioritizes security and applies state-of-the-art security measures to keep customer information safe.

Financial education is often overlooked in schools — although some states in the U.S. have shown improvement in recent years — and is similarly not discussed in homes. Parents either feel they lack the expertise themselves to discuss finances with their children or uphold outmoded taboos around discussing anything related to money.

As a result, millions of people live paycheck to paycheck and struggle with debt when they may not have to. These people may simply lack basic budgeting skills — because they were never taught them to begin with — or may be paying out significant funds each month for unwanted subscriptions they didn’t even know they were paying for.

Thanks to advances in technology, people can access a wide range of free financial literacy resources via online offerings from their financial institutions, mobile apps, and various free courses.

Some companies, such as Emma — have taken fintech to the next level with its Emma App that basically serves as a personal financial assistant using AI-based technology.

“Meet Emma, your Best Financial Friend. She helps you in avoiding overdrafts, finding wasteful subscriptions, and giving the control you need over your finances,” according to the company. “Connect all your accounts in one place, for free.”

With Emma’s valuable input and assistance, users can climb out of debt and avoid incurring debt in the future while whipping their current budgets into shape and cutting loose unnecessary fees they may be paying each month.

Identifying the Need for an Effective Budgeting App That Saves Money

Emma Co-Founder and CEO Edoardo Moreni told us that he and Co-Founder Antonio Marino launched the company immediately after graduating from the University of Manchester in the UK. But, initially, they weren’t quite sure how the company’s mission would unfold.

“It was a discovery process because we were really looking into the financial world,” Moreni said. “We had some experiences in our lives where banks didn’t behave in the way we think they’re supposed to.”

This included incurring what Moreni says are unnecessary overdraft fees.

Edoardo Moreni and Antonio Marino are the Co-Founders of the Emma App.

“As a student, I had a student account that went into overdraft simply because the bank didn’t tell me that I needed to move money into it,” he said. “It wasn’t even because I didn’t have the money, it was because I forgot to transfer the money.”

Subscription management was another financial pitfall the business partners noticed in their own lives and extrapolated that, if they were experiencing this problem then, many others likely were as well.

“When I was in uni, it was my first year with a bank account, which I wasn’t really checking regularly, and I ended up having Netflix for a year for no reason other than I didn’t have daily control of my finances,” Moreni said. “It was also a bad deal because at the time — 2012 — the content on Netflix in the UK was complete crap.”

These kinds of scenarios helped Moreni and Marino understand that the consumer’s relationship with banks was different than they thought it was supposed to be.

“The bank is there to provide a place to store money,” Moreni said. “It doesn’t create an extra layer on top of that that can actually help you improve your finances, track everything, and make commitments that you implement for the longer term which is something that everyone should do in their life.”

The Emma App does these things. Moreni said the app is geared toward users between the ages of 25 and 35 who, like the company founders, were fresh out of college and trying to understand how personal finance works in the real world.

“We’re definitely not taught in school or anywhere else (about finances) so people usually start getting into this mindset after they graduate from uni, where they start earning and making some money and start looking at their financial life,” Moreni said. “That’s when we come in and offer these users a tool to give them an entire snapshot of their financial life and ways to optimize it.”

He said the Emma App’s core feature is helping users budget from payday to payday.

“You can tell us when you get paid, and then you can plan all your spending in that period,” Moreni said. “This is useful for people who really want to know how much money they’ve got left until their next payday.”

The Emma App helps users save money by identifying subscription services users may not realize they are paying for.

The app also predicts a user’s incoming bills within a specified period to help them understand how much money they actually have to spend on other things.

“The same technology is also used to predict overdrafts,” Moreni said. “If we can predict recurring payments, we also know which accounts are likely to become overdrawn. So, if we see that there is a $100 balance and there is a bill of $200 coming in three days, you get a notification to check into that.”

And Moreni remembers well the frustration he felt when he realized he paid for Netflix for a whole year when he wasn’t using it, he said, so he understands how subscription services can go unnoticed by consumers.

“They’re very hard to identify unless you really keep track of every single transaction in your bank account,” he said. “If you’re someone that does three or four transactions a day, they can easily slip through and you don’t see them,” Moreni said.

The Emma App’s subscription identifying function has been a popular feature among users.

“We’re seeing 50% or 60% of people that go into the app actually have their aha moment on the subscriptions part because everyone has at least one thing that they were paying for that they didn’t know they were actually paying for,” Moreni said.

Moreni explained that listening to customer feedback and providing quality customer service is a priority for the Emma App team.

“We have live chat support in the app so you can chat to us whenever you want,” he said. “That’s a very strong feature. There is no bot or anything. There is a real human being that can help you 24/7.”

He said the company maintains an active role on its social media pages and its community forum.

“If you have any suggestions about features or have any problems you can write to me in the forum,” Moreni said. “I’m always in the community forum. You can even chat with me directly. I really like to be involved in the product.”

He said that when the Emma App was still taking shape in its early days, suggestions and comments from its first 20,000 users played a significant role in shaping the core of the product today.

Of course, when an individual’s financial information is involved, consumers can rightfully be curious about what kind of security is in place for a particular product. Emma App users can rest easy knowing their information is secure and encrypted.

“The protection of your data is our highest priority,” according to the company. “Emma uses state-of-the-art security measures when handling your information. All connections between your device, our servers, and your banks are protected using TLS 256-bit encryption.”

“This means your login credentials are never stored on our servers, and we never have access to make any changes to your accounts,” according to Emma. “We know your data is sensitive to you. Simply put, we do not and will not sell or rent your personal information to anyone, for any reason, at any time.”

Introducing New Features Such as Payment Reminders and Fraud Detection

Moreni said that, as the Emma App continues to grow, the team is looking to add more features users will appreciate in the near future.

The company will soon be rolling out a bill reminder feature, which will notify users of upcoming bills that are due three days ahead of time, even if paying the bill will not overdraw the account.

He said the team is also working on a fraud detection component.

“With the fraud detection function, we’ll soon be able to actually tell you if your phone number or email address has been detected online or on the Dark Web so you know that you need to address those issues,” Moreni said.

If you’re struggling with debt or simply want to have better control over your finances, the Emma App may be the right tool for you.