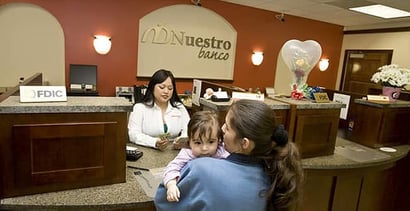 In a nutshell: A new study from the University of New Mexico found many undocumented immigrants are severely underbanked, wary of debt and unable to handle financial setbacks of $100 or more.

Estimated to number between 11 and 12 million, undocumented immigrants account for roughly 3.5 percent of the total population and 5.1 percent of the labor force, according to The Pew Research Center.

Despite composing such a significant portion of the U.S. population and workforce, new research out of the University of New Mexico shows many of these undocumented individuals are not only struggling financially, but are ill-equipped to handle a financial setback of even $100.

In her latest paper Giving Credit Where Credit is Due: What We Can Learn from the Banking and Credit Habits of Undocumented Immigrants, UNM School of Law Professor Nathalie Martin explored undocumented immigrants’ credit habits and “the grim realities of living in the financial shadows.”

What role do immigrants play in the U.S. economy?

Regardless of whether undocumented immigrants have a legal right to work and live in the United States, they constitute a large chunk of the the national tax base, paying more than $11.8 billion in taxes in 2012 alone.

Representative Zoe Lofgren (D-San Jose) has represented California’s 16th and 19th districts since 1995, and currently serves as a Ranking Member of the Subcommittee on Immigration and Border Security.

Lofgren, whose constituent base was 41.1 percent Latinos and more than two-thirds minorities in 2011, pointed to Georgia’s HB 87, the Illegal Immigration Reform and Enforcement Act of 2011, as a precautionary tale against deporting undocumented immigrants.

The bill effectively tried to crack down on undocumented immigrant enforcement in the state, only to backfire when crops went unharvested, costing the state millions of dollars.

“Undocumented immigrants are working, without authorization, most of them paying taxes — either with a tax payer ID number or in some cases they make up a number — so it’s an underground economy to some extent,” Lofgren said. “It is a population that’s easily exploited because of their underground status, underpaid to some extent in many cases, and living in fear.”

What do we know about their financial habits?

This “underground economy,” as one might expect, makes it difficult to truly understand how these immigrants interact with the American financial system, both on a local and national scale.

“While it is not entirely clear how immigrants participate the financial mainstream, we do know that undocumented immigrants are frequently unbanked or underbanked,” Martin writes.

Pulling on data from the 2013 FDIC National Survey of Unbanked and Underbanked Households, Martin found a few startling facts:

“It is a population that’s easily exploited because of their underground status, underpaid to some extent in many cases, and living in fear.”

“One of those barriers is language,” Torres said. “If people are unable to communicate in [their native language] when doing their finances, that’s going to be prohibitive to engaging with a financial institution.”

How do immigrants and financial institutions interact?

Historically, many banks have been hesitant to extend services to undocumented immigrants, but that is slowly starting to change.

For example, Bank of America began offering credit cards to undocumented immigrants as early as 2007, using their individual taxpayer identification number (ITIN) in lieu of a social security number. In 2005, Wells Fargo started signing mortgages to consumers with ITINs as well.

However, Lofgren said most undocumented immigrants sometimes circumvent these identity requirements either by using someone else’s social security number or providing a fake one.

“They’re paying the Social Security tax, but they’ll never collect it [unless they register under the DACA program],” she said. “There’s a multibillion dollar account in Social Security that is sort of shoring up the trust fund that has been paid into by undocumented immigrants and will never be called upon because of the phenomena of the false numbers.”

“Credit card companies and mortgage lenders steer Hispanics and African Americans in high-cost loans through red-lining and other identifying methods,” Martin writes. “Hispanics of all stripes, immigrants or not, are targeted for subprime cards based in part on the presence of a significant immigrant population in many Hispanic communities.”

As one respondent told Martin:

“I went in to New Mexico Title Loans and told them I wanted to pay off my account, but they spoke fast to me and confused me and ultimately did not allow me to pay off the loan that day. They avoided letting me pay off the entire loan even though that was what I wanted to do. They only let me pay $112, even though the balance was $531.21, and I had the money to pay them off … They take advantage of people and confuse people and make them borrow more money than they want to.”

“Credit card companies and mortgage lenders steer Hispanics and African Americans in high-cost loans through red-lining and other identifying methods … Hispanics of all stripes, immigrants or not, are targeted for subprime cards.”

Even more surprising (or not, considering their susceptibility to financial strife) is many of the undocumented immigrants surveyed reported taking little to no government assistance, even when they or their children were eligible:

“One person said, ‘I didn’t think I could get government help, but I also didn’t want to rely on other people’s help. I wanted to make my own money,'” Martin reports. “Still another said, ‘…I think the real reason I am against borrowing money and asking for assistance is that I don’t want my daughters to think that is [a] way to do things. First you need to try and make it on your own.'”

Also of note — undocumented immigrants are finding ways to buy and secure money despite their illegal status:

NCLR supports new CFPB proposals that would rein in the “debt trap” of payday lending.

Some respondents even reported being homeowners. As one participant told Martin, “We paid for it in cash payments. It is a mobile that we bought from Florida Homes. They never asked for a Social Security number on the contract we signed with them … We never missed a payment or were late on any of our payments, so I’m not sure what the consequences would have been for not paying.”

One thing is sure, however — the remittance industry is booming among undocumented immigrants. Martin’s research found two-thirds of respondents sent money to their home countries “fairly regularly,” adding that 35 percent of remittance sends earn less than $20,000 but sent an average of 15 percent of their earnings to their country of origin.

“In the end, we learned a fair amount about how the undocumented community survives, and in many ways, it is remarkable that it does.”

Afraid to exercise their rights

Another contributor to undocumented immigrants’ underground, impoverished status stems from the fact that many either don’t know their rights as consumers or are simply too afraid to even set foot near a courthouse out of fear of deportation.

“Every person who’s in the United States is entitled to due-process of law. It’s in the Constitution,” Lofgren said. “But most people who are undocumented are afraid … that if they come to the attention of the authorities, they’ll become a candidate for removal.”

“If you have a segment of the population that’s really afraid to report crime or be a witness to crime, it’s really an inherently dangerous situation.”

This fact alone presents security risks — risks that could be reduced if immigrants felt more secure using traditional banking institutions in the United States or had more access to informative materials in their native tongues.

“From a crime point of view, if you are paid in cash, you’re walking a potential crime victim. Having your earnings in a safe financial institution is much to be preferred over walking around with cash or putting cash under the pillow at home,” Lofgren said. “If you have a segment of the population that’s really afraid to report crime or be a witness to crime, it’s really an inherently dangerous situation.”

Undocumented immigrants are also susceptible to financial and legal fraud, especially after Obama’s recent executive order deferring deportation for upward of five million illegal residents. One of the most prominent of these is “notario fraud.”

“Basically people say, ‘Oh, you know I can help you — I’m an attorney, I can get your papers in order,'” Torres said. “‘Give me $3,000. I’ll get you to the front of that waiting list.’ Notario fraud is pretty rampant in a lot of our member communities … And unfortunately, once an immigrant has been taken advantage of, they’re not aware of any sort of legal protections they may have.”

Critics may be opposed to opening up the American financial system to undocumented immigrants, both to avert supposed national security risks — such as money laundering and the funding of terrorist organizations — and mitigate risky investments on the part of financial institutions.

“Indeed, it is hard to imagine a person making it to the middle class without developing these traditional financial relationships,” Martin writes. “In the end, we learned a fair amount about how the undocumented community survives, and in many ways, it is remarkable that it does.”

“It’s not that they’re completely outside of any financial system. They just aren’t in the mainstream financial system as much, which we know in the long run does hurt their opportunities for greater asset building,” Torres said.

In the meantime, undocumented immigrants will likely have difficulty maintaining financial stability until new laws are passed at the federal level.

“Many of us have urged the President to take the actions that he’s permitted to do,” Lofgren said. “There might be a few other things he can do, but I think he’s come close to the end of what he can do with his existing authority. Congress needs to legislate and improve the law. It really is a mess, and right now we’re not doing anything … It may be that we’ll need a new Congress after the 2016 election to actually have sensible action.”