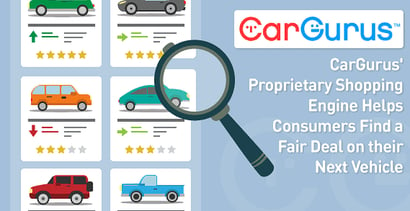 In a Nutshell: The folks at CarGurus have set their sights on a lofty goal: bring more transparency to auto shopping. Every day, CarGurus receives information on more than 4 million available car listings from across the U.S. to include on the site. Then, based on analysis of detailed specs on each car as well as dealer reputation ratings from other shoppers, CarGurus rates vehicle prices in four categories — great, good, fair, and overpriced. This allows consumers to quickly and accurately comparison shop for their next car. Unlike other aggregate car sites, CarGurus doesn’t allow sellers to pay for higher placement in the site’s search results, further exemplifying its commitment to providing honest car rankings and dealer reviews.

I always buy used cars, and a large part of my buying process includes spending time researching my options before I make a purchase. Since I’m typically looking for the best deal rather than a specific make and model, it can be overwhelming to wade through all the listings on the different sites, some of which might not even include photos, pricing, and mileage details.

Once I’ve narrowed down my options, I then have to plan test-driving appointments quickly so the car doesn’t sell before I get a chance to look at it. By the time my hands are finally on the steering wheel and I’m talking to the owner or dealer, I’ve invested enough time that I’m really hoping the car drives well enough to buy it.

My most recent car purchase, a 2001 Nissan Altima, was definitely the worst deal I’ve made in a long while — not because anything is wrong with my car, but because I was hasty and didn’t do enough research to get a good deal in the first place. I wanted to bypass the process and still pay fair market value or less. Instead, I overpaid by $1,000, according to the Kelley Blue Book value.

Steve Halloran serves as the Director of Content and Social Media for CarGurus.

When we recently spoke with Steve Halloran, the Director of Content and Social Media for CarGurus, he walked us through the company’s price analysis charts and told us about its commitment to transparency and education. The memory of my recent impulsive buy bubbled up during the call, and, I’ll admit, hearing how simple it would have been to check the pricing on the spot stung a little.

“We believe anyone in the internet era should be doing comparison shopping,” Steve says as we discuss the mission CarGurus was founded on a decade ago.

Today, the site is thriving with 20 million monthly unique visitors thanks to its transparent price analysis and devotion to providing honest car rankings and dealer reviews.

The comprehensive price analysis remains one of the key differentiators among CarGurus and its competitors. Most of the searches conducted on CarGurus serve results with price analysis, which means each listing shows how the price for that particular vehicle in the specified area compares to local and national listings.

“We pull used-car listings on a daily basis to find out what the asking price is for individual makes and models,” says Steve. “And we can tell you pretty specifically what the average price for listings of a particular car is in a particular area, and we can tell you how the price of each individual listing you’re looking at compares to that average.”

Every time you conduct a search on CarGurus for your next set of wheels, the results include a price analysis with a local and national market breakdown.

About 4 million used-car listings are analyzed by CarGurus daily, and that analysis considers not only each listing’s make, model, and year, but also trim, mileage, transmission, options, region, and vehicle history.

Depending on how much the vehicle price is over or under the market price, the listing will be ranked as a Great, Good, Fair, or Overpriced deal. These at-a-glance rankings help users quickly gauge the going rate for a particular vehicle. As a user clicks on individual listings, a deeper analysis is available, including a history of price reductions.

Consumer Education Is at the Forefront of CarGurus

Steve has been with CarGurus since almost its beginning, having joined the team as employee number seven back in 2007. Over the years, he has helped shape the way CarGurus assists and interacts with its users.

In his role, Steve has to determine what’s trending and how to respond to it, so he and his team generate relevant discussion topics all the time, delving into technological advancements and political news.

“Cars play a very large part in American life,” he says. “There are new cars released every day, the seasons change, so these things are going to drive the car market.”

While a lot of the new features emerging in the auto market add a heightened level of safety and security, Steve says they can sometimes come with increased risk if they add distraction. Many cars now allow drivers to stay in touch with friends through social media, but trying to do so while driving could cause an accident.

His team’s goal is to keep consumers informed by writing about trends in the industry and new vehicle releases.

Growing Out of Massachusetts to Be an International Brand

Dealers of any size can join CarGurus and upload inventory details, plus individuals can even sell their old personal vehicles one at a time. However, the company does not allow any sellers to pay for higher placement or better ratings of their deals.

“We are reaching out to some dealerships, and, in some cases, dealerships are coming to us, but if they express an interest in working with us, we can help them get online.”

Not only does CarGurus offer an extensive database of up-to-date autos, it also boasts an active online community with users interacting in forums and uploading commentary on cars and dealerships reviews.

Headquartered in Cambridge, Massachusetts, CarGurus has regional offices in a few large cities throughout the U.S. in addition to a team of freelance writers reviewing new vehicles as they become available.

The brand has also reached north into Canada and is building a presence in the United Kingdom to spread transparent comparison car shopping to the masses.

Every time my Nissan makes a new chugging or clunking sound, normal or not, I wince a little. The reason I seek out even better than fair market pricing on the used cars I buy is to give myself wiggle room for the inevitable repairs. Knowing I lost $1,000 of my fix-it fund hurts.

I was impatient with my last purchase, but knowing there’s a site with straightforward analyses right on the search listings means I can avoid overpriced deals, or at least know there’s room for negotiation, the next time I’m buying.

CarGurus was created to provide the used-car industry with a higher level of transparency so consumers can make better, more informed decisions.

With input from other users and CarGurus’ commitment to honest listings and fair pricing analysis, Steve thinks the company is having a major impact on the industry.

CarBuyingTips™: Expert Advice on Buying a Car with Bad Credit