7 Ways to Save on Student Loans, Featuring Edvisors 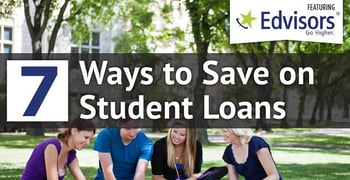 By: BadCredit.org Staff
Our popular “How-To” series is for those who seek to improve their subprime credit rating. Our articles follow strict editorial guidelines.

What’s worse, many of the indebted are young Americans who’re just beginning their careers.

According to Mark Kantrowitz, Senior VP and Publisher of Edvisors, their inexperience makes them more prone to mishandling their student loans.

“Traditional college freshmen have very little experience with debt and don’t necessarily understand how student loans work,” Kantrowitz said. “They may not appreciate that loans must be repaid, they may treat them as free money or they may borrow to the limit because they can and the money burns a hole in their pocket.”

Student loans are a significant debt, regardless of your age. But how do we get a message of fiscal responsibility through to America’s youngest borrowers?

I spoke at length with Kantrowitz to find seven key student loan tips every undergrad should hear.

1. Understand the Difference Between Fixed and Variable Rates

Every loan, regardless of whether it’s private or federal, will be either a fixed or variable rate. The interest rate is the amount of interest you’ll pay on your outstanding principal every year and is typically applied via an interest rate factor on each of your monthly payments.

The rates can come in two forms — fixed and variable. Fixed rates do not change for the duration of the loan. If you sign up for a 4.5 percent interest rate, you keep it for the life of the loan.

A variable rate, however, can change according to what’s known as the prime rate, a market-dependent figure that represents the most favorable loan conditions possible (i.e. what someone with excellent credit would get), or the London Interbank Offered Rate (LIBOR), the rate at which banks offer loans to one another (in fact, more than half of loans are dependent on the LIBOR index since it’s directly connected to a lender’s source of funds.)

“Oftentimes when they see the variable rate expressed as the prime lending rate plus 6 percent, they think it’s a 6 percent fixed-rate loan,” Kantrowitz said. “They don’t realize it’s greater than 6 percent and that the interest may change significantly by the time they graduate.”

2. Borrow According to Your Career Potential

While you may rely on student loans to cover some, if not all, of your college education, it’s important to borrow based on what you think you could afford after college.

“Students often do not know how much they should borrow,” Kantrowitz said. “A good rule thumb is that your student loan debt at graduation should be less than your annual starting salary and ideally a lot less.”

“A good rule thumb is that your student loan debt at graduation should be less than your annual starting salary and ideally a lot less.”

For example, if you borrow $50,000 for college and land a job that only pays $20,000 a year, you’ll have difficulty making monthly payments (unless you’re eligible for an income-based repayment plan, as is the case with federal student loans).

“You need to keep your debt in sync with your income,” Kantrowitz said. “If you go into a field that pays more – like a bachelor’s of science in nursing, where starting salaries are around $60,000 to $70,000 — you can afford to take on more debt for that degree. But if you’re getting a degree in underwater basket weaving, which presumably doesn’t pay very much, you need to borrow less.”

You probably won’t find someone just passing out free bags of money, but you will have access to grants, scholarships, tax credits and thousands of other debt-free ways to fund your education.

Here are a few popular examples of college money you won’t have to pay back:

Scholarships are plentiful as well. Aside from Sallie Mae’s scholarship search and sites like StudentScholarshipSearch.com, check with clubs, groups and organizations in your hometown for local scholarship opportunities.

Paying for a less expensive programs is a surefire way to minimize your student loan obligations post-graduation.

“The best way to save on college costs would be to go to a less expensive college,” Kantrowitz said. “Try going to an in-state public college as opposed to a private for-profit or out of state college.”

“Try going to an in-state public college as opposed to a private for-profit or out-of-state college.”

Although plenty of private lenders will offer education loans to students with virtually no credit history (with help from an eligible co-signer), Kantrowitz recommends borrowing from federal agencies first.

Although nobody anticipates defaulting on their loans, tools like income-based repayment, forbearance and deferment are generally exclusive to federal loans and can help save you from an economic catastrophe later on down the road.

“Auto-debit is when your monthly payment is automatically transferred from your bank account to the lender,” Kantrowitz said. “Many [student loan] lenders will give you a slight interest rate reduction for signing up for auto-debit, typically .25 or 0.5 percent. It significantly reduces delinquency rates and saves you money.”

While a 0.5 percent reduction on your interest rate may not look like much, it’ll actually add up to hundreds of dollars in savings over the life of the loan.

Signing up for auto-debit is a simple, easy way to reduce your debt burden while simultaneously avoiding late payments — just be sure to keep enough money in your bank account for it.

7. Pay Off the Loan with the Highest Interest Rate First

Chances are you won’t have a single student loan, but rather a basket of loans you accumulate over the course of your education. These may vary in their balance and interest rate, so how do you know which loan to pay off first?

“I advocate picking the loan with the highest interest rate and applying an extra payment to that loan,” Kantrowitz said. “That will save you the most money over the life of the loan… If you pay off the highest intereat rate loan first, more of your payments are going to principal than to interest, so you will ultimately pay off all your loans quicker.”

“I advocate picking the loan with the highest interest rate and applying an extra payment to that loan.”

Student loans do not have as significant as an impact on your credit score as credit card debt would. This is because student loans are considered installment loans, which tend to be more stable and less volatile than more variable debts like credit cards, which change interest rates frequently.

But whatever you do, always make your monthly payments in full and on time.

“I hear students complain about having a 520 FICO score saying ‘I was only late with a single payment,'” Kantrowitz said. “A single late payment can cut 50 to 100 points from your credit score if you don’t have a very long credit history.”

And with a low credit score, you’ll have a harder time finding loans with favorable rates, getting cheap insurance, buying a home and perhaps even getting a job. The higher your score, the easier your life will be.

The Need For Financial Literacy

“I think high school students need financial literacy training,” Kantrowitz said. “Not necessarily a full year but just some basics… We should also have two refresher courses in college — one when you’re a freshman and one when you’re a senior.”

Groups like the California Jump$tart Coalition, BancVue and countless others are working toward educating k-12 students about college loans and personal finance, but grassroots campaigns and college entrance/exit counseling only go so far.

“I think there needs to be more of a national priority,” Kantrowitz said. “Students who drop out of college don’t get exit counseling. They are the ones at greatest risk of defaulting on student loans and are four times more likely to default… They may have two-thirds the debt of college graduates, but they don’t have two-thirds the income. There’s an inability to repay the debt and a lack of awareness of repayment options.”

How to Pay Off Student Loans After a Death

A Quick Guide to the 4 Most Common Federal Student Loans