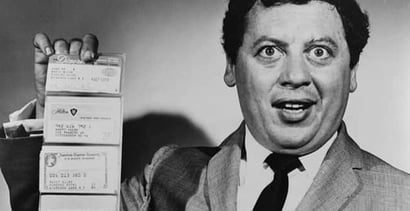 For anyone born in the last half-century, credit cards are as much a part of modern life as refrigerators, fast-food restaurants and indoor plumbing.

But those little pieces of plastic we so casually wield today weren’t always so ubiquitous. In fact, the modern revolving credit account has really only been around for the past six decades or so.

Although the card he describes wasn’t what we think of today as a revolving credit account, it set the stage for modern-day credit cards.

“You observe,” he pursued as I was curiously examining the piece of pasteboard he gave me, “that this card is issued for a certain number of dollars. We have kept the old word, but not the substance. The term, as we use it, answers to no real thing, but merely serves as an algebraical symbol for comparing the values of products with one another. For this purpose they are all priced in dollars and cents, just as in your day. The value of what I procure on this card is checked off by the clerk, who pricks out of these tiers of squares the price of what I order.”

Fun fact:  In Bellamy’s novel, a credit card was every citizen’s right and was used by the government to issue dividend payments or credits.

The Charga-Plate was a direct predecessor to the credit card. Developed by the Farrington Manufacturing Company, these little metal plates were stamped with a customer’s information, and an imprint of it was taken when a store charge was made.

The Charga-Plate was used mainly by department stores and was really more of a bookkeeping tool than an actual credit card.

Fun fact:  The Charga-Plate did not include a customer’s actual street address – only their name, city and state, for privacy protection reasons.

Diners Club was the first charge card to be widely accepted by different establishments. It was used primarily to pay for meals and entertainment expenses and was a membership-based service.

Diner’s Club cards still weren’t credit cards, however. Members had to pay off their charges at the end of each month.

Fun fact:  Diners Club cards were actually made of paper until the early 1960s.

Bank of America issued the first true “all-purpose” credit cards with a revolving credit line, test marketing them in Fresno, California, in 1958.

Within a year, more than two million BankAmericard credit cards were issued across California with participation from more than 20,000 merchants.

These first credit cards required no credit check or application – in fact, cards were sent out active without even being requested!

An article published in a March, 1970 issue of LIFE magazine summed up the ensuing chaos:

“They have been mailed off to unemployables, drunks, narcotics addicts and to compulsive debtors, a process President Johnson’s Special Assistant Betty Furness found very like ‘giving sugar to diabetics.'”

Fun fact: Eventually BankAmericard was licensed to other banks and in 1977 changed its name to VISA because it had such popularity in overseas markets.

Not to be outdone by Bank of America, a California banking group led by Wells Fargo launched their own service and combined it with several banks in the Northeast, naming it Interbank/Master Charge.

In 1979, Master Charge merged with Citibank’s Everything Card and the combined company name was changed to MasterCard.

Fun fact: MasterCard has never surpassed VISA in cards issued or transactions made.

The Discover Card introduced the concept of a cash-back bonus to customers when it debuted in 1986. It became popular among consumers because it also carried no annual fee and among merchants for its flat-rate transaction costs, which were lower than VISA and MasterCard.

Fun fact: Discover Card was introduced by Sears and was intended to turn that company into a major financial player. Sears Financial Services was sold off in 1993.

President Obama signs the Credit CARD Act into law on May 22, 2009 in the Rose Garden at the White House.

The U.S. Federal Government passed the Credit Card Accountability Responsibility and Disclosure Act of 2009 (CARD Act) in an effort to bring more fairness and transparency to the credit card industry.

For example, the act restricts the issuer’s freedom to raise rates on existing balances, prevents credit card companies from targeting consumers under age 21, requires cardholders to receive more advance notice of upcoming bills and a handful of other safeguards that favor the consumer.

Fun fact:  The CARD Act is often called the credit card users Bill of Rights and passed in Congress with huge bi-partisan support.

Modern credit cards have evolved over the years to include numerous features from their predecessor cards. The convenience of a revolving credit line and almost universal acceptance has made the credit card an indispensable part of our modern life.

What to Do If Your Credit Card Account is Closed

Is it Bad to Open a Store Card for Holiday Purchases?

Google Wallet: What It Means for Your Cards

Should Your Company Consider a Business Credit Card?