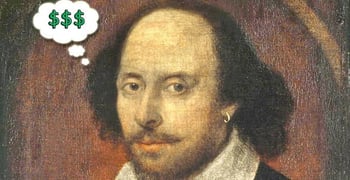 Despite being written centuries ago, Shakespeare’s plays are filled with wisdom that still rings true today.

Here are four of the most important money lessons from the Bard’s work.

1. Money isn’t everything, “The Merchant of Venice”

We live in a culture where we always want shiny new things, and we often go into debt to get them. Throughout many of his plays, Shakespeare teaches us money is only temporary and provides limited happiness.

In “The Merchant of Venice,” the Prince of Morocco must guess which casket among three (gold, silver and lead) contains a rich heiress’ portrait to win her hand in marriage.

He chooses the gold because it’s the nicest and feels emboldened by a message inscribed on the outside — “Who chooseth me shall gain what many men desire.”

However, he opens the casket to find a skull inside with a different message:

“All that glisters is not gold—
Often have you heard that told.
Many a man his life hath sold
But my outside to behold.
Gilded tombs do worms enfold.
Had you been as wise as bold,
Young in limbs, in judgment old,
Your answer had not been inscrolled.
Fare you well. Your suit is cold—
Cold, indeed, and labor lost.”
-Prince of Morroco (reading scroll)
Act II, scene 7

We learn glitz and glamour are fleeting illusions that leave one hollow. Material goods are not as important as love and happiness. Finally Bassanio, a fellow protagonist, arrives to correctly choose the lead casket inscribed with the mantra, “Who chooseth me must give and hazard all he hath.”

In “Measure for Measure,” a duke tells a young jailed nobleman:

“If thou art rich, thou art poor;
For, like an ass whose back with ingots bows,
Thou bear’st thy heavy riches but a journey,
And death unloads thee…and when thou art old and rich
Thou hast neither heat, affection, limb, nor beauty,
To make thy riches pleasant. What’s yet in this
That bears the name of life?”
-Duke, Act III, scene 1

While the monologue is largely a foray into the great equalizer of death, this excerpt is Shakespeare’s way of saying “more money, more problems.” While so many of us covet wealth, it can be a burden.

As people earn riches, greed becomes a difficult monster to control and people start spending more than ever. It’s why you see athletes and celebrities earn millions and go broke. They start buying luxury cars and massive homes, funding the lives of friends and family and making poor investments. Before they know it, nothing is left.

Some handle wealth well, but for some of us, moderation may be better.

This quote also reminds us your money doesn’t go with you when you die, so don’t let greed for money rule your life. The duke even warns an obsession of riches can eat away at the soul itself — “What’s yet in this that bears the name of life?”

“Neither a borrower nor a lender be,
For loan oft loses both itself and friend,
And borrowing dulls the edge of husbandry.”
-Polonius, Act I, scene 3

This reminds us debt is burdensome and causes stress and the lender’s life is a stressful one.

Additionally, borrowing from or lending to a friend can ruin that friendship if things don’t go well. The same thing can happen when family members loan each other money.

4. Debt can be dangerous, “The Merchant of Venice”

Shakespeare’s “The Merchant of Venice” is full of lessons about the dangers of debt. In fact, the main storyline is about a loan gone wrong.

Bassanio, a merchant, wants money to court an heiress named Portia. He asks his friend and fellow merchant Antonio for a loan. He doesn’t have the funds on hand but offers to be a guarantor on a loan (assuming his trade vessels arrive on schedule).

They approach Shylock, a lender known for unsavory loan practices. He agrees to give Bassanio a loan with no interest but with a catch — if Antonio defaults, he must give Shylock a pound of his flesh:

“Go with me to a notary, seal me there
Your single bond, and — in a merry sport —
If you repay me not on such a day,
In such a place, such sum or sums as are
Expressed in the condition, let the forfeit
Be nominated for an equal pound
Of your fair flesh, to be cut off and taken
In what part of your body pleaseth me.”
-Shylock, Act I, scene 3

He agrees despite Bassanio’s protests. When Antonio can’t pay the loan back, Shylock demands Antonio’s flesh despite Bassanio offering to pay it and double the amount — but we won’t spoil the ending for you.

While no modern lender will take a pound of flesh from you for reneging on a loan, debt traps are still very real today and are harmful in other ways.

There will be major damage to your credit if you fail to pay your debts on time, and you may have to ward off harassing debt collectors until you pay what’s owed.

There still are unscrupulous lenders out there who take advantage of people who can’t qualify for traditional loans and charge astronomical interest rates.

Payday loans, for example, charge massive interest rates and are known for getting people caught in a cycle of debt that is impossible to escape.

Before you take out a loan or start racking up credit, make sure you are aware of the potential dangers if you cannot pay it.

Although his plays are more than 400 years old, these financial lessons from Shakespeare’s work still resonate with us today.

The 5 Most Common Credit Questions Answered